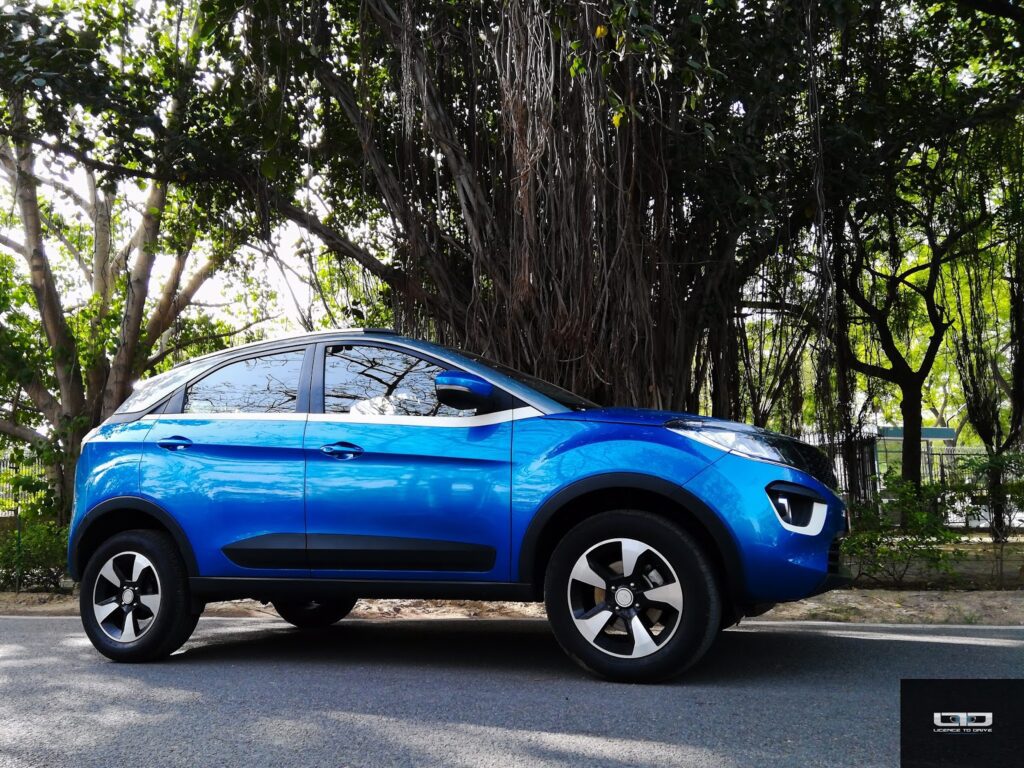 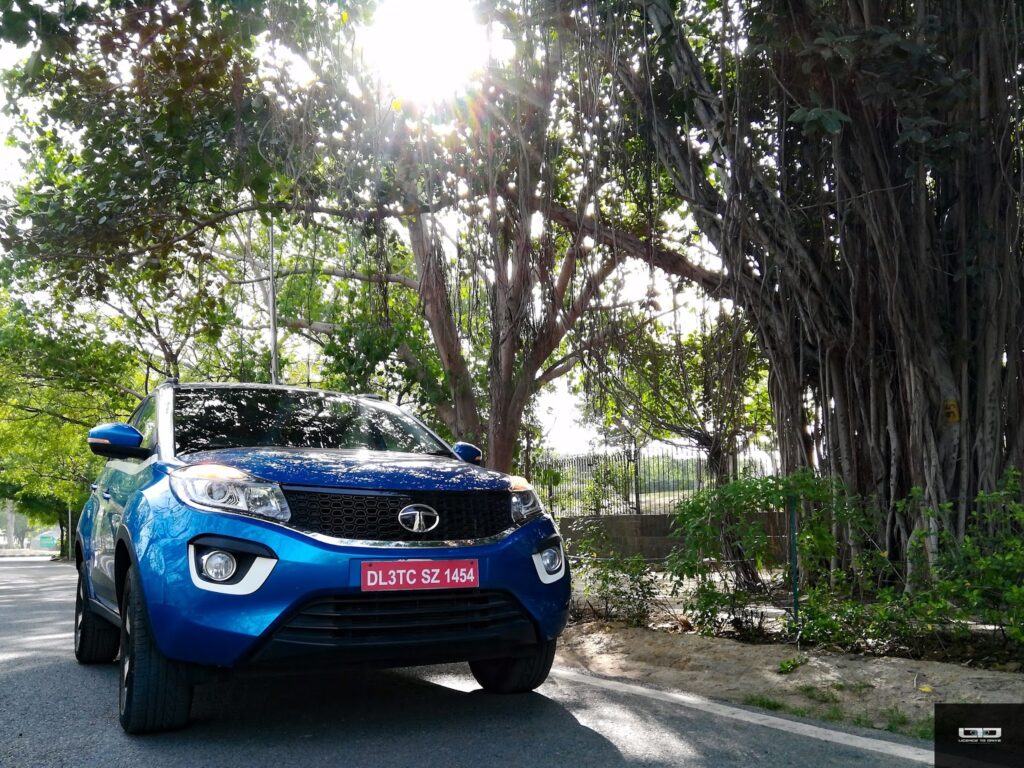 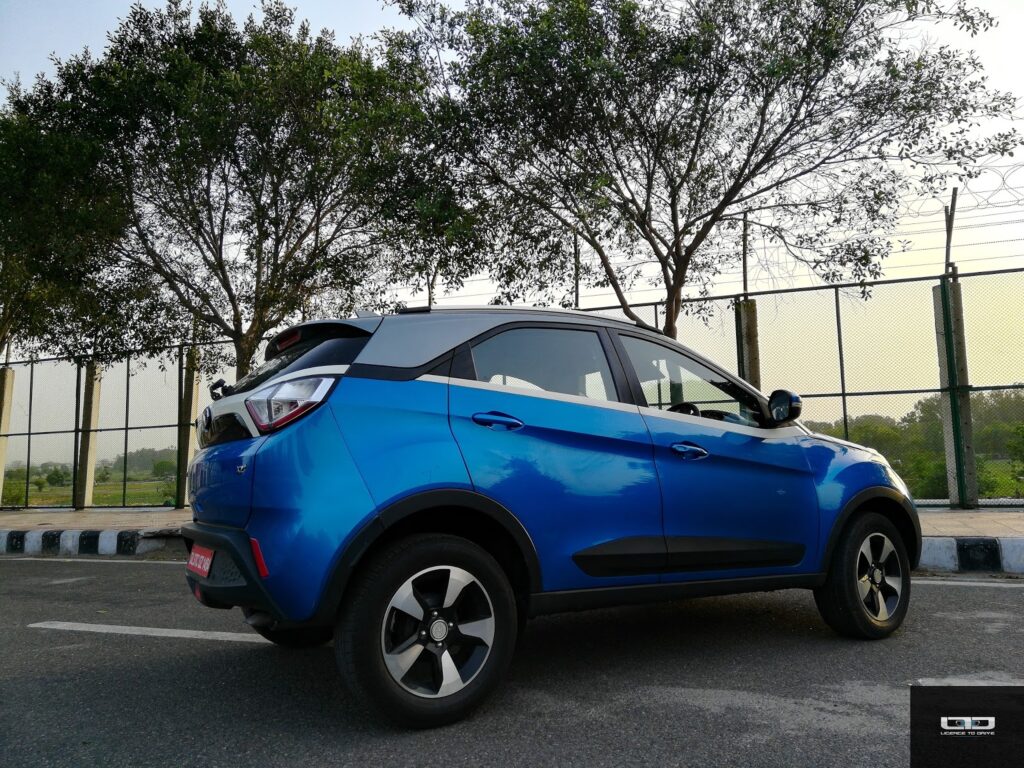 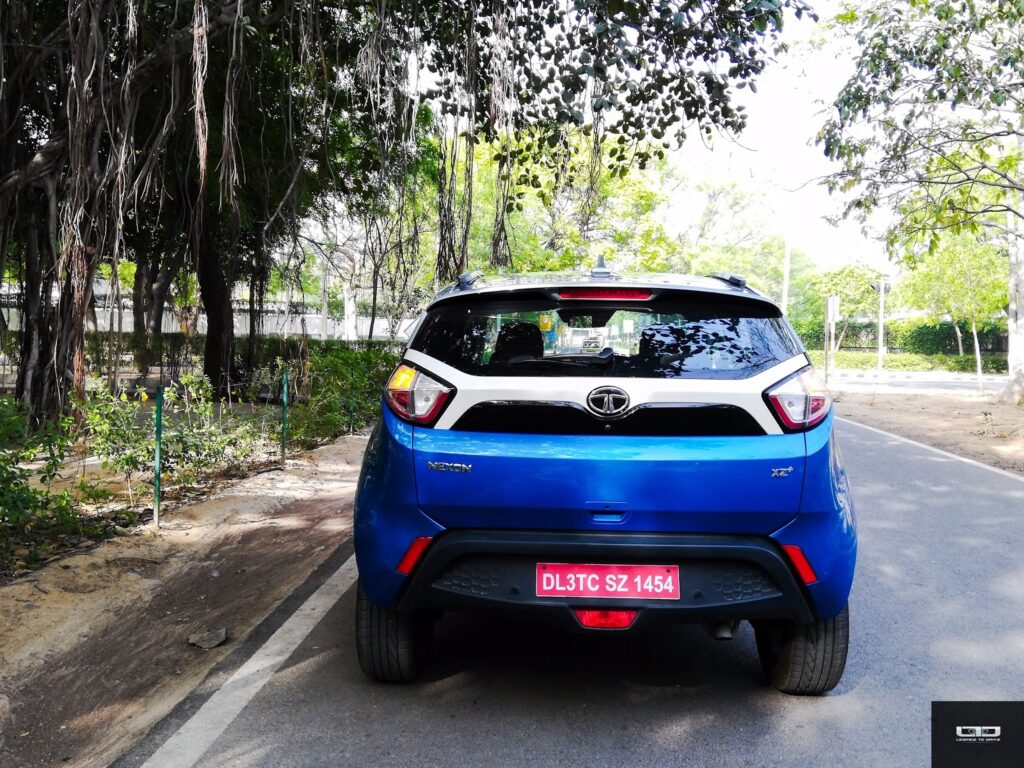 The compact SUV market is unarguably the hottest segment in the Indian car industry, with every manufacturer trying to grab a share of the pie. Tata never had a product in this segment until September 2017, when they came up with a slightly differentiated offering with the Nexon – a lifestyle compact SUV aimed at millennials.

Starting out as a futuristic-looking concept car showcased at the 2014 Auto Expo, the Nexon eventually hit the Indian roads as it was imagined. And it has been a runaway success ever since. Rolling out 10,000 units in under 3 months and 25,000 units in under 6 months, it has captured the imagination of young buyers with its flamboyant design, loaded specs and aggressive pricing, giving Tata Motors a fresh lease of life.

So what has really helped the Nexon carve a niche for itself in a crowded segment packed with several worthy contenders? We spent a week with Tata’s first compact SUV to find out.

Our test vehicle was the range topping diesel XZ+ variant in Moroccan Blue with a dual tone roof. Aesthetically, the Nexon looks like no other car in its segment. Sports coupé like in its design, it boasts of near perfect proportions and is quite a head turner on the streets despite its compact size. A rather curvaceous looking thing, it sports flared wheel arches, has a 209 mm ground clearance, integrated projector headlamps and a sloping roofline. The dual colour tone looks premium and adds a dash of sportiness, elevating the overall road presence a notch higher. The 16″ alloys give it a confident stance and the signature ivory white sash running along the belt line forms a stretched out ‘X’ at the rear. That is Tata’s idea of the X-factor. A bit overdone for our liking, but opinion remains divided on this bit of exterior styling. Other than that, the Nexon’s short front and rear overhangs give it a compact profile, adding to the interior roominess. The split LED tail lamps and roof-mounted spoiler finish out the aggressive design at the rear. While some may find the design too flamboyant and screaming for attention, the Nexon is clear in its audience segmentation and has gone all out to woo young buyers, who would rather go with a fresh and bold styling that stands apart. Having said that, styling a vehicle under 4-metres is a terrible challenge, and yet Tata Nexon pretty much aces it. 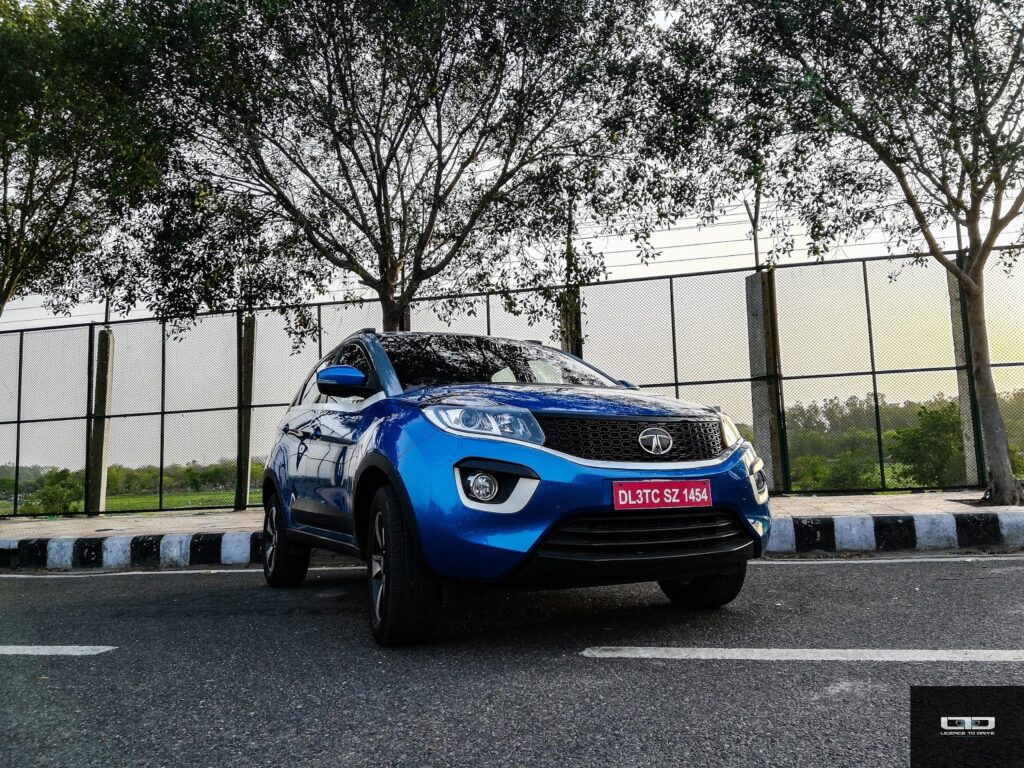 Since its launch Tata Nexon has been a runaway success 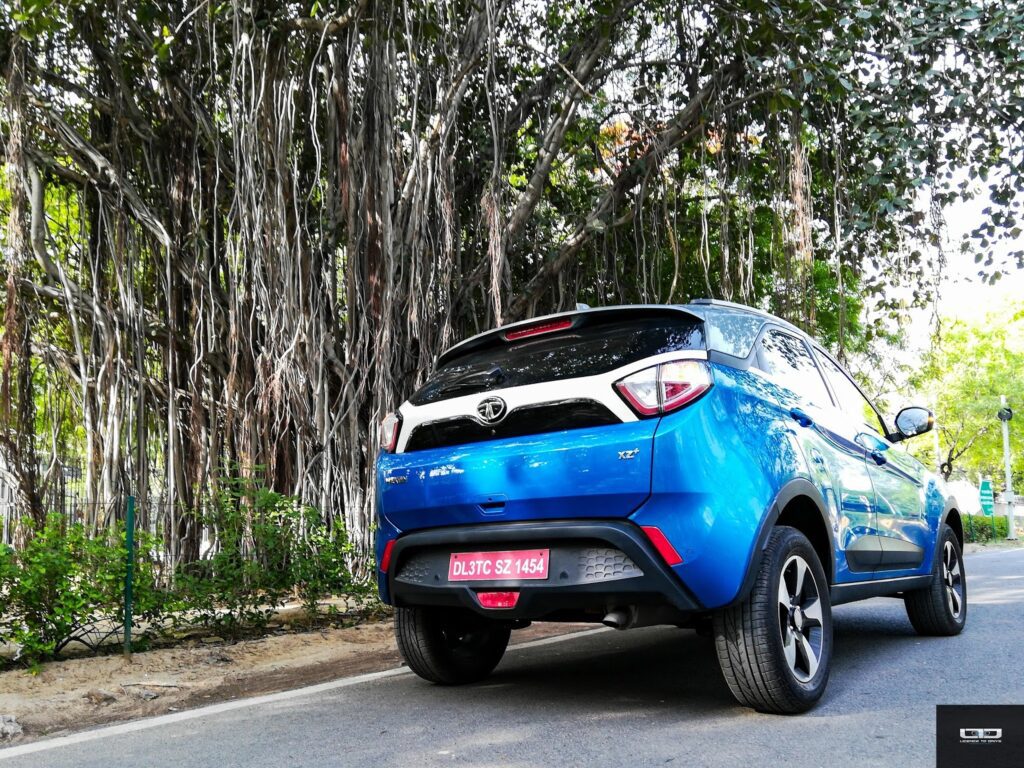 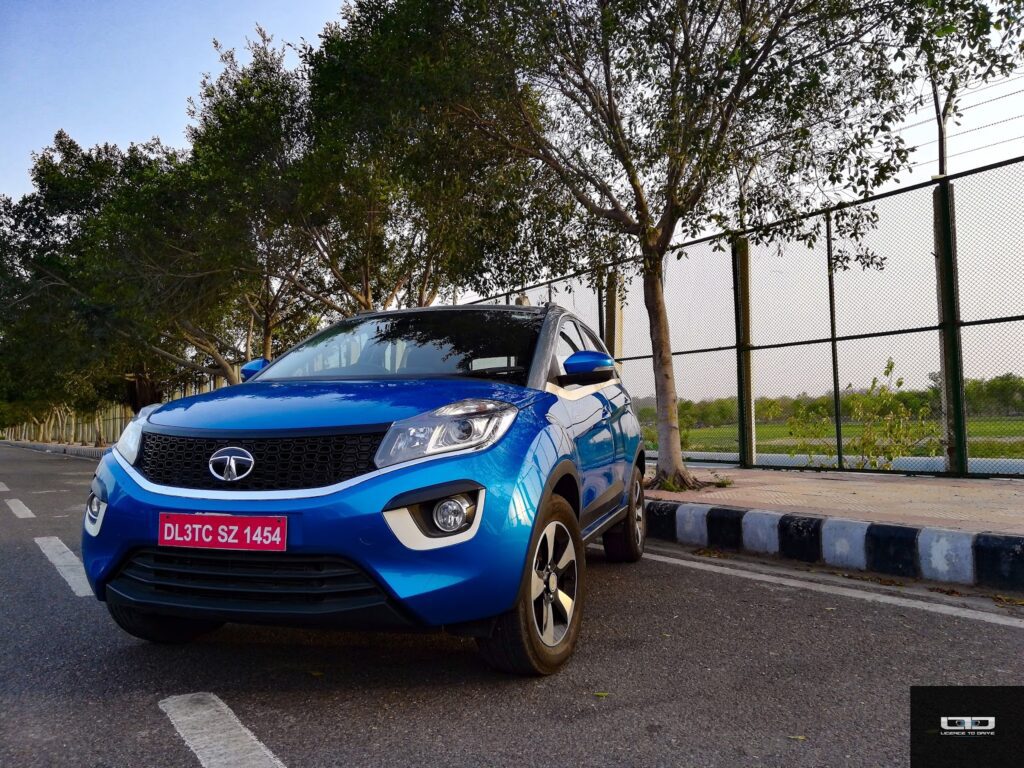 Inside, the Nexon is more restrained in its approach, with a three-tier dashboard design that is flowing and seamlessly blends into each other. The floating 6.5″ dash-top touchscreen is what you would expect in some premium European cars. It takes care of all the infotainment needs – climate, music streaming, radio, phone pairing, voice commands, navigation via Android Auto and more. The black and grey aesthetic is a welcome styling choice and the precise yet heavy electric power steering with integrated controls feels quite right. While many of the interior components are borrowed from other Tata offerings, the overall design is fresh and well put together. The Nexon also scores when it comes to storage and cabin flexibility. A lot of thought has gone into improving usability and practicality of the cabin space, with ample cubby holes, and inclusions like a central armrest with storage, umbrella holders on the door, a huge glove box that doubles up as a food tray, and a sliding non skid surface on the central console, that covers the cup holders and can be used to keep a smartphone.

While the overall fit and finish is good, the Nexon isn’t without its flaws. For starters, some uneven exterior panel gaps and cladding edges reveal its finishing shortcomings. The shiny plastic on the dashboard and the ordinary fabric seats in the top end model is good, but not great. Then there are ergonomic issues with the placement of the charging point, aux and USB port. They are placed deep within a cubby hole in the central console, making access while driving an annoying struggle. 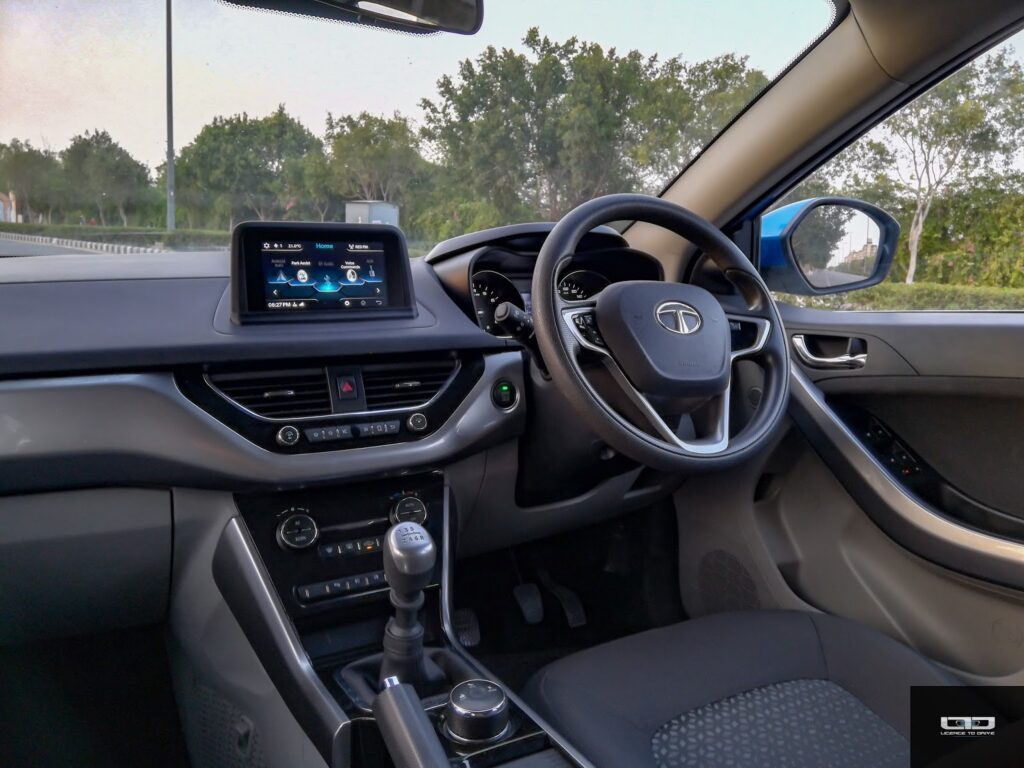 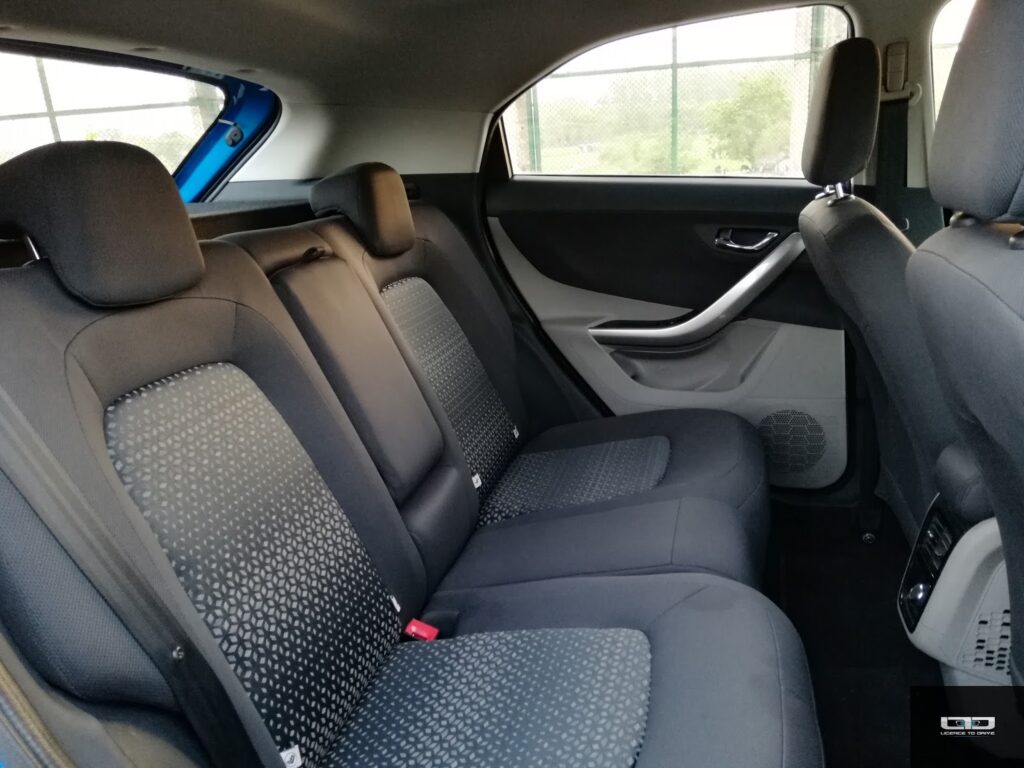 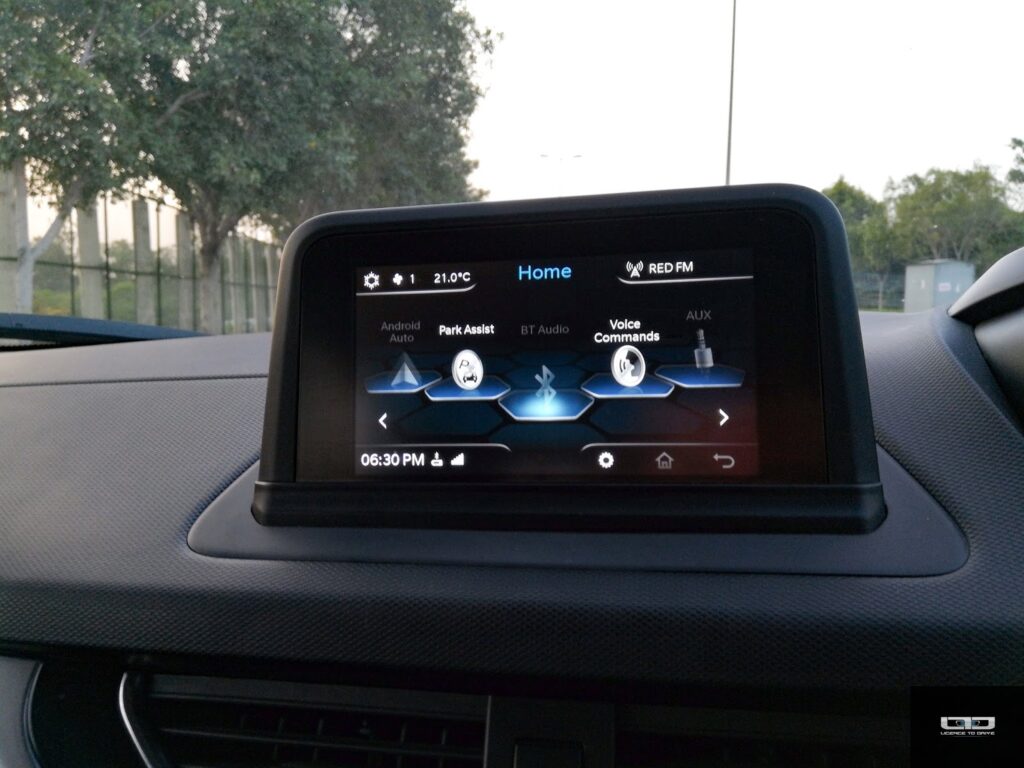 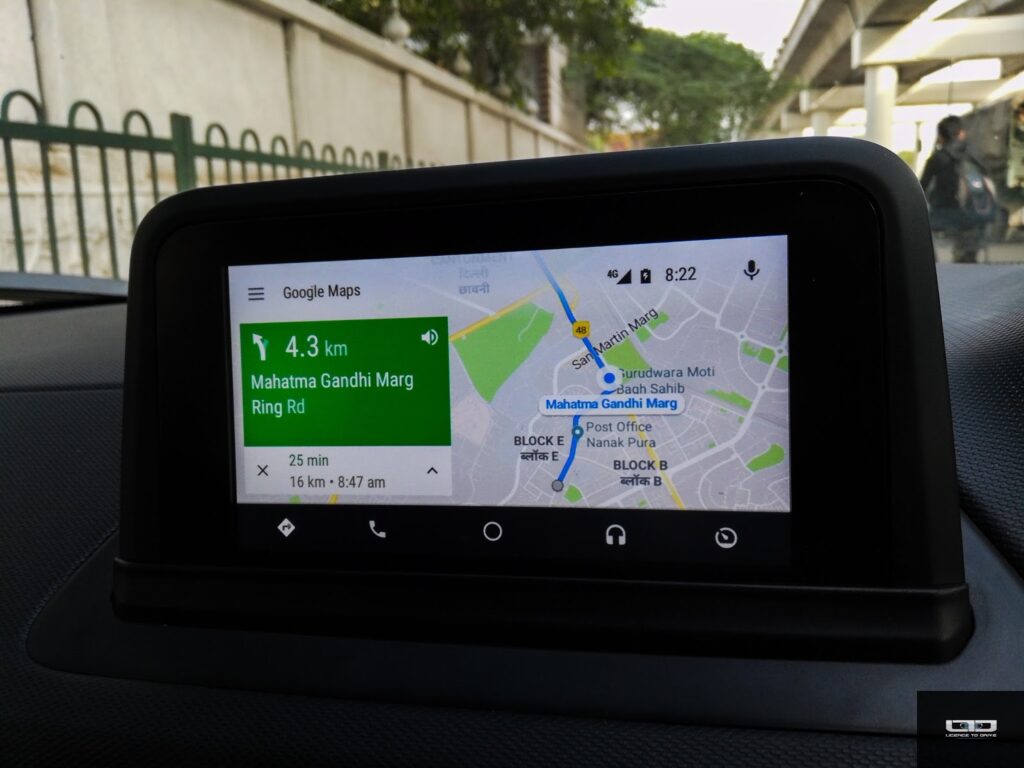 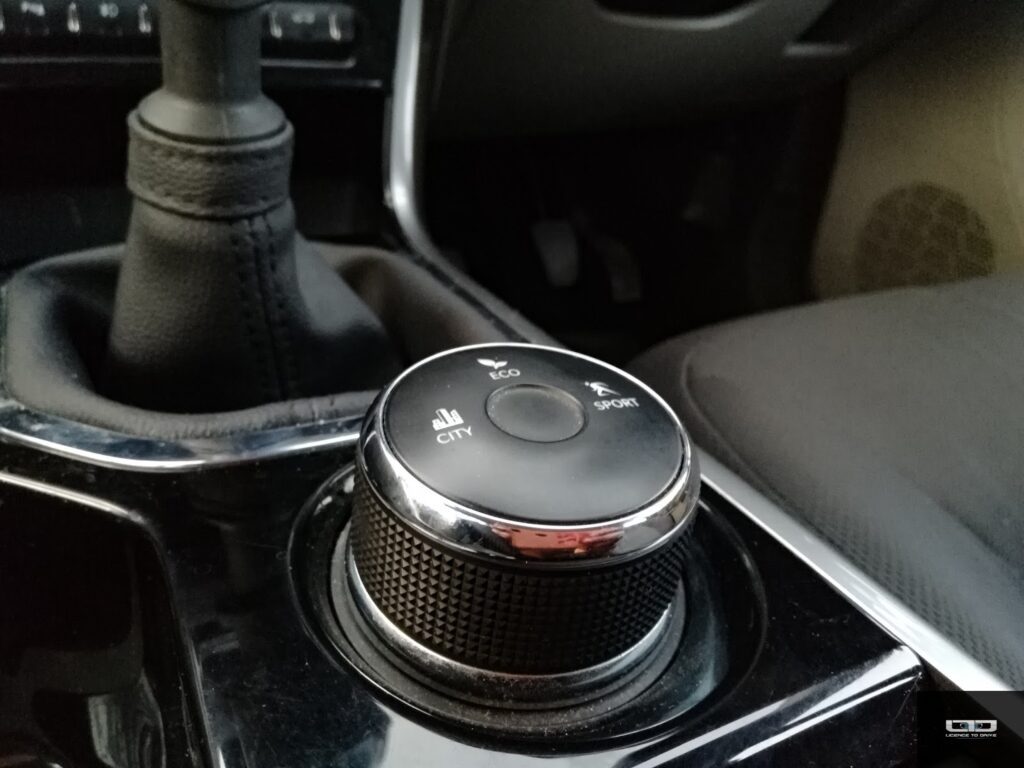 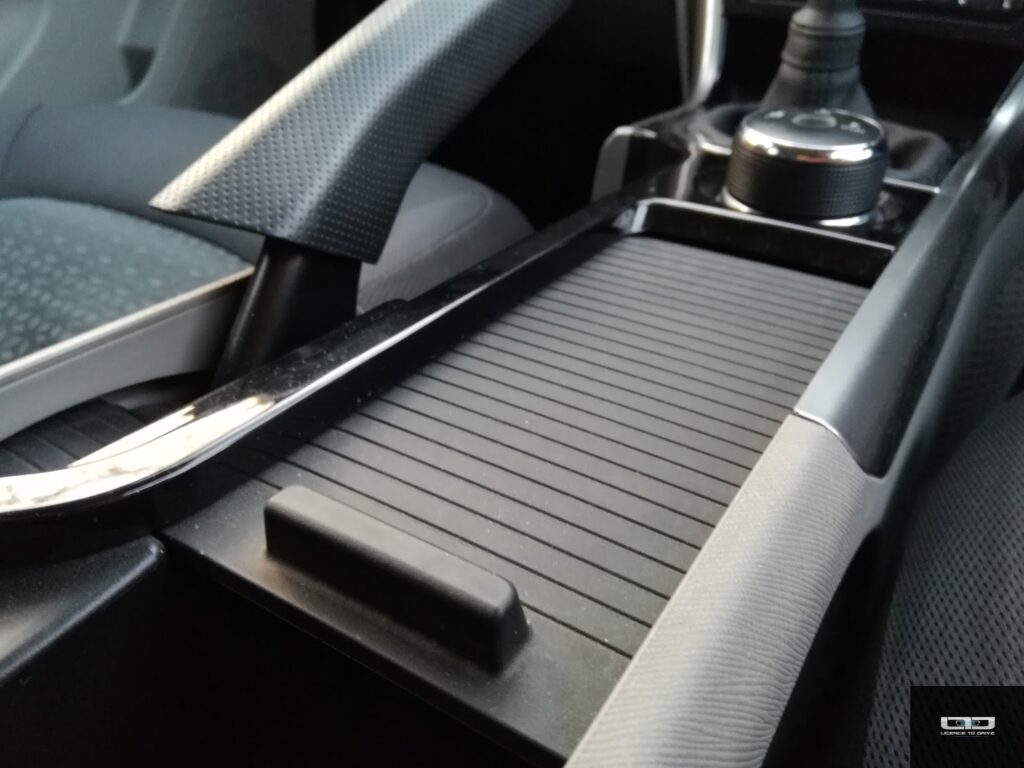 The Nexon however, comes with a loaded equipment list and that is another reason that makes it so attractive to the tech generation. While bluetooth phone pairing is a breeze, the quality of music streaming via the 8-speaker Harmon sound system is quite extraordinary. The addition of features like smart key, push button start & stop and Android Auto are a big plus. Then there is a reverse parking camera and park assist with sensors and dynamic guideways, rear air vents, auto folding ORVMs and rear charging points that make life simpler inside. The cabin is spacious for four passengers with ample head and leg room in the front and rear, but things can get a bit tight for five.

The boot is large enough with a 350L capacity, and can be operated electronically. The 60:40 split of the rear bench opens up a lot more space and can be utilised as a fully flat cargo hold area.

Under the hood, our test car came with the new 1.5L Revotorq turbo diesel motor, which produces an impressive 110 PS and 260 Nm of torque. The Revotorq motor is a refined piece of engineering, suited for both city and highway drives. Relaxed when you want it to cruise along, and engaging when you floor the pedal. There is no significant lag, nor any rattle or annoying hums making their way into the cabin. The engine is mated to a new 6-speed manual transmission that once again surprises with its quick shifting abilities and precise throws. The overall driving experience is quite enjoyable. The Nexon is impeccably well behaved in stop & go traffic thanks to ample lower end grunt and consistent in its demeanour. There are three modes – Eco, City and Sport that lets you choose your drive and mood. The infotainment panel changes colours from green to blue to red as you flick through the dial. While there is an understandable lag in the Eco mode, shifting to Sport sharpens the throttle response and makes for an engaging drive. One would however tend to keep it in the default City mode most often, and drive about all-day with considerable ease.

The suspension is a tad firm and makes the ride quality somewhat bouncy. This is more evident in slow speeds, but irons out as you gain momentum. The handling is impressive, but one does encounter a bit of body roll while cornering or quickly changing lanes due to its tall stance and high ground clearance. But the grip remains firm and the chassis balanced, which inspires confidence to throw the vehicle around a bit. The weighted steering adds to the sense of control.

The fuel efficiency of the diesel unit is quite remarkable. We got a combined efficiency of 17.8 km/l driving in multiple modes around the city and highways. If one drives with a bit of caution, it is easy to clock a healthy average of over 20 km/l.

On the safety front, the Tata Nexon has a fully reinforced energy absorbing body structure, and comes with dual front airbags, ABS with EBD with Corner Stability Control. Other features include height adjustable front seat belts and ISOFIX child seat restraint system at the rear. 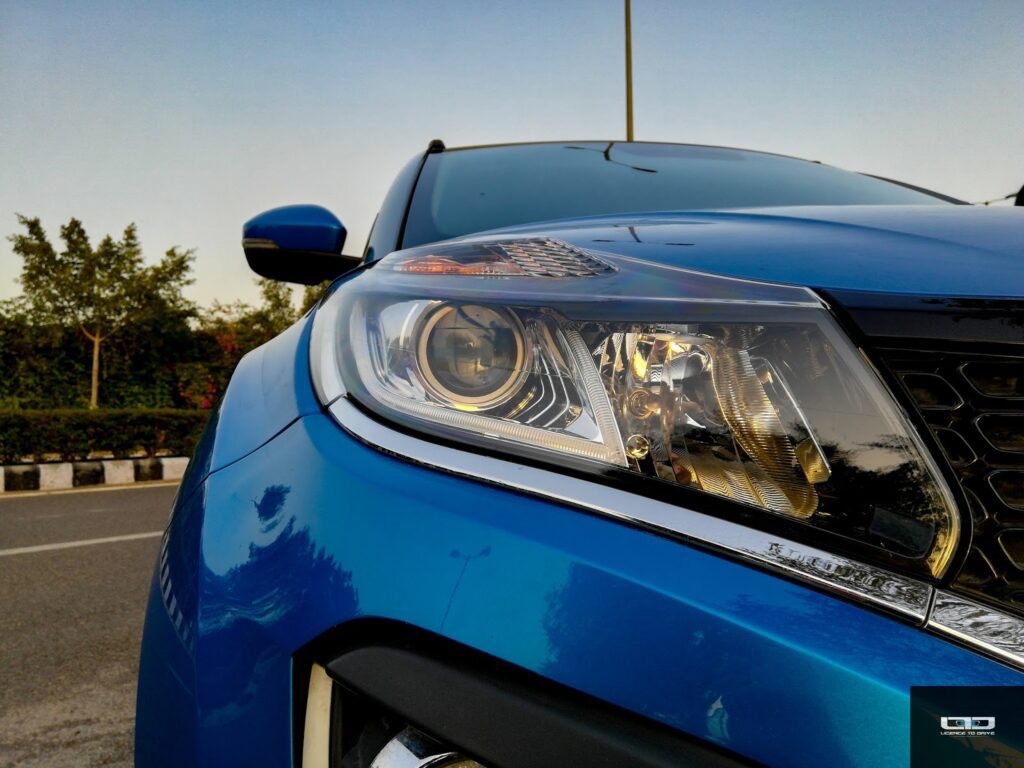 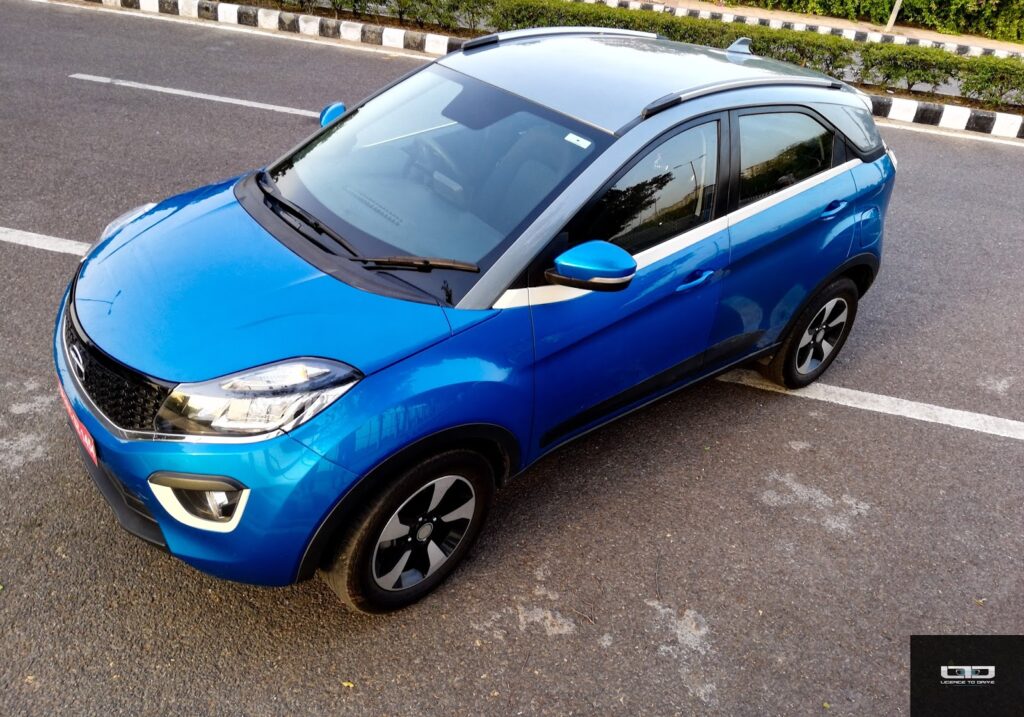 Looking at the Nexon, one might think that it’s all show and no substance. But as you get behind the wheel, it soon becomes clear that it is a potent combination of both. It’s a joy to drive, combining unique looks with modern tech features, a roomy and comfortable cabin, ample storage, great fuel efficiency and a very aggressive price point. The Nexon clearly is a compelling package that is hard to resist.

The range starts from INR 6.15 lacs for the XE Petrol, and goes up to INR 9.89 lacs for the range toping XZ+ diesel with dual tone roof. For what it offers, it is extremely good value for money.

While the Nexon has its work cut out in its segment, it has the ability to hold its own against competition. With the AMT version out now, the buzz will be sustained for longer. The Nexon has not only created a buzz for itself, but firmly brought back Tata into the game. This has been one big leap for Tata and although they took their sweet time to venture into the sub-INR 10.0 lac compact SUV segment, it was worth the wait. The Nexon is a clear segment winner and has set a new benchmark for others to match up to.