Volkswagen stepped into the sub 4-metre compact sedan space in India during the first half of the year 2016, with the Ameo. They launched the 1.2L 3-cylinder inline petrol variant first, following it up with the 1.5L 4-cylinder TDI diesel during the festive season. Finally they introduced the range topping diesel automatic with the DSG gearbox to complete the line up, which we extensively reviewed earlier.

While the Ameo petrol looks exactly like the diesel variant inside out, the drive distinguishes one from the other and makes all the difference. We spent some time with the top specced 1.2L MPI Highline petrol with a 5-speed manual gearbox (there is no automatic option with the petrol), to find out if it was as impressive as its diesel sibling with the DSG gearbox. The diesel automatic by the way had us completely besotted, as it drove and felt like a car from a segment above. 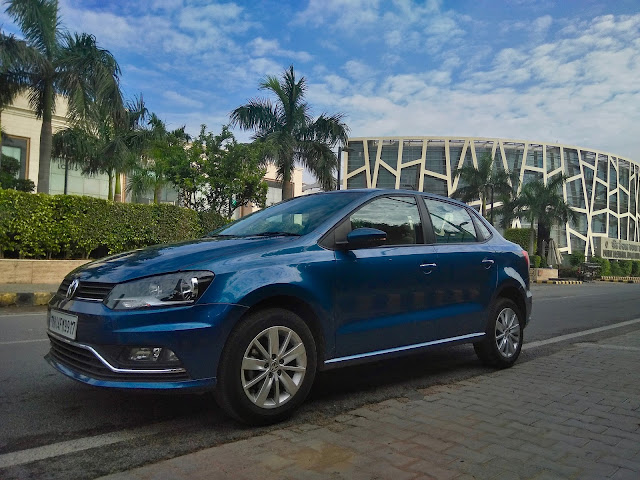 Ameo is a car that boasts of impeccable pedigree and is designed and engineered by the Germans specifically for the Indian market. Devoid of any flair and flamboyance, the exterior design doesn’t scream for attention. It has a sense of maturity often associated with European cars. But that doesn’t quite inspire a generation of under-30 Indians brought up on measured doses of flash and bling, who find the understated aesthetics staid and boring. It works for us though.

At first glance, the Ameo comes across as a solid car. A galvanised steel body with a laser-welded roof wrapped in a superior paint finish reinforces its very European credentials. It has a confidence inspiring sturdiness and comes with dual airbags & ABS as standard across the range. And that makes for a no-compromise vehicle in its class, as far as safety is concerned. 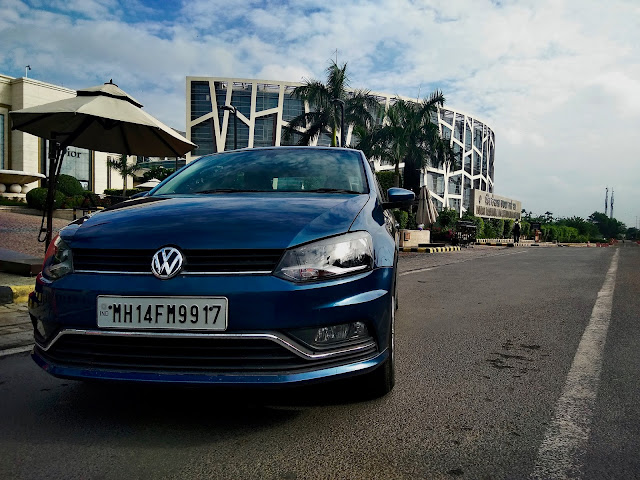 While it looks identical to the Polo from the front, the Ameo is actually a sedan that has been built ground up. Most people tend to dismiss it as a Polo with a boot, but a careful look around tells you it is more than that. Well proportioned aesthetics, symmetry in design, flowing lines and a muscular frame give it a fairly elegant stance. Even though the boot is a bit stubby and the square tail lamps look like an afterthought, there isn’t any major flaw to pick. Except for the lack of any signature element that stands out.

There are subtle chrome touches on the bumper and door handles, electrically-foldable outside rear view mirrors, dual-beam headlamps finished in black, LED turn indicators, and a sporty set of alloys that embellish the exterior. The petrol and diesel variant look exactly the same, except for the rear ‘TDI’ badge on the diesel. 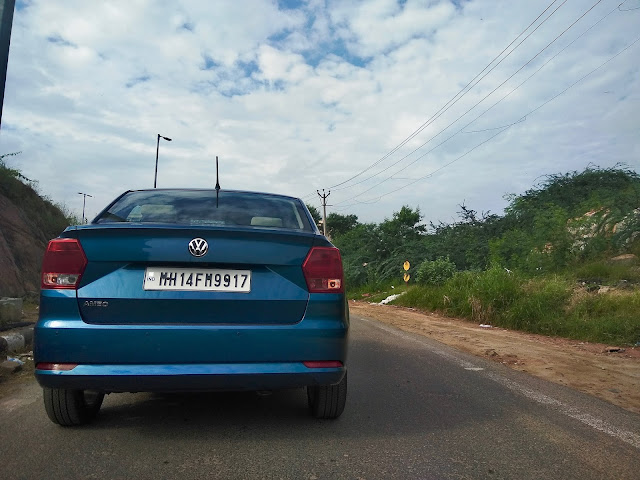 The Ameo’s strong point is its premium and well finished interior. Identical to its diesel counterpart in every sense (except that the diesel comes with an optional DSG gearbox) the Highline trim of the petrol variant has a beige and black theme that makes it look roomier than it actually is. Brushed aluminium and chrome accents lend a classy touch, whereas the leather wrapped flat bottom tilt & telescopic steering wheel adds sportiness.

The multi-function driver display shows time, distance, average speed and fuel efficiency on the go. There is an easy to navigate touchscreen infotainment system which comes with MirrorLink for smartphones, bluetooth & iPod connectivity, phonebook sync, SMS viewer, CD/MP3 player, SD card input, USB & AUX compatibility. The system can be controlled through the multi-function steering and comes with voice command capabilities. A host of other features like automatic climate control with rear AC vent, cruise control, speed limit, rain sensing wipers, reverse parking sensors and a parking camera find their way into this feature rich compact sedan; few of them being segment first. However, a few glaring misses which could have been easily added include keyless entry, electric ignition and auto headlamps. The Ameo deserved to have them. 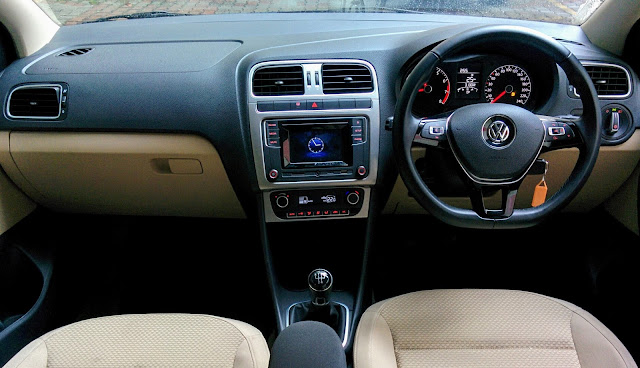 When it comes to interior space the Ameo struggles a bit. The rear is its weak spot with limited headroom, legroom and storage. There is a huge transmission hump that makes it uncomfortable for the middle passenger. Shoulder room is inadequate and ingress and egress isn’t easy either. The front seats offer good support and cushioning though, but heavily built occupants may find them to be a bit narrow. Pushing the front seat all the way back makes it difficult for rear passengers. So if you are a plus-size family, the Ameo isn’t going to be the most comfortable choice for you. Tall drivers get limited space to manoeuvre their left arm, making gear shifts and using the hand brake a bit cumbersome, specially with the arm rest down. It takes a while before you get used to it.

There is adequate storage in the front with cup holders in the central console, a central armrest with storage, a deep and spacious cooled glove box and bottle holders in the door pockets. But the rear doesn’t get anything except a single cup/bottle holder and half door pockets. There are no seat back pockets or rear arm rest, which usually comes handy with additional cup holders. 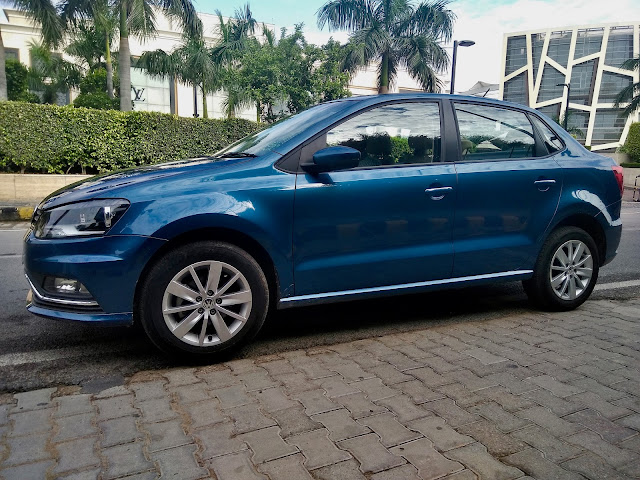 The petrol Ameo is powered by a 1.2 litre 3-cylinder engine, producing 74 BHP and 110 Nm of torque and is paired with a 5-speed manual gearbox. It is low on power and torque, and the fact that it is not a turbo doesn’t help either. The motor feels coarse on the lower revs, is weak on acceleration and the engine sounds and feels a bit clanky. Surprisingly, there is a lot of noise & vibration that creeps into the cabin through the pedals and floor. Whereas the Ameo diesel has a perfectly insulated cabin inspite of a noisy engine. 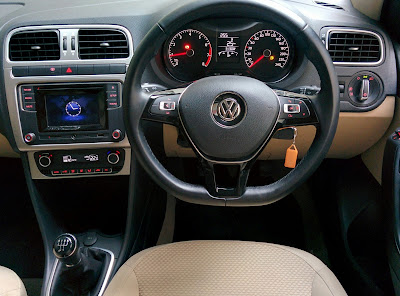 The petrol Ameo makes for a stylish work commute and a good city drive only if you don’t have too much performance expectations from your set of wheels. On highways, the shortage of grunt from the engine makes it hard to exploit open stretches. Tackling a steep incline or overtaking remains a struggle, and the overall driving experience isn’t as exciting as its diesel counterpart. Aggression and enthusiasm behind the wheel will not be met with any response in this one.

The road ride is pliant and the Ameo handles well along curves, with minimal body roll. At low speeds it absorbs bumps & rough patches without fuss, while at high speeds only major road irregularities are felt inside the cabin. The suspension is well tuned for long fatigue free rides for both driver and passengers, and high speed stability is best in its class.

The engine is tuned for efficiency, and that is another positive that works in favour of the Ameo. However, there is a catch. For a car that is most likely to be used as a work commute and for in-city travel, the Ameo is quite thirsty in stop & go city traffic. We drove 315 kms within the city, and managed to return figures of 12.6 km/l. The efficiency only kicks in under controlled driving conditions. On a particular expressway stretch of 20 kms we got our best figures of 18.4 km/l, but that was when we were driving at a consistent speed of 60-70 km/h and mostly in top gear. There is a significant drop in efficiency depending on driving conditions, which means you may not be clocking anywhere close to company quoted figures. 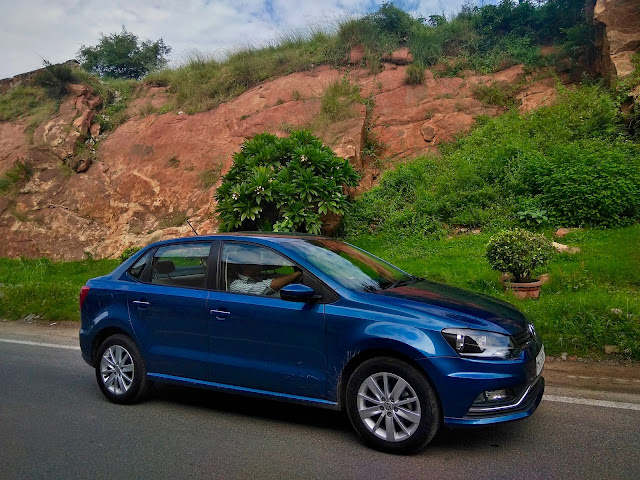 Overall, though it looks the same and offers similar features and creature comfort, the petrol Ameo does not quite match up to its diesel counterpart in terms of driving dynamics. With its superb DSG gearbox and powerful 1.5L 4-cylinder turbo diesel, the Ameo diesel offers a drive like no other car in its segment. It is a bit on the expensive side, and that is where the petrol Ameo plugs the gap. But with some serious competition in the form of the Hyundai Xcent, Honda Amaze, Ford Aspire, Tata Tiago and the new Maruti Suzuki Dzire, you may find the Ameo petrol falling short on a few counts.

Prices for the Ameo petrol start at INR 5.50 lacs for the base Trendline variant, and the fully specced Highline trim costs INR 7.45 lacs. The top of the line petrol Ameo is well built, feature rich, comfortable and efficient, but lags behind on performance and interior space. Pitched head to head against the 2017 Dzire 1.2L petrol from Maruti Suzuki, which is the latest kid in the block and better packaged in terms of price, performance, efficiency and space, the Ameo has quite some catching up to do.

But that doesn’t take away from the fact that the Ameo in its petrol avatar is an adequately capable vehicle that brings German engineering into the entry level sedan segment. With a solid lineage and prestige attached to its badge, it is a seriously built compact sedan that doesn’t compromise on safety or refinement, and has in fact forced the segment leader to up their game and plug their weak spots.

The Ameo 1.2L MPI is not the brash boy choice of wheel. It is more for the matured young man. The careful planner and prudent driver. The responsible son. Or the doting father. For whom the family’s safety and comfort comes first. Someone who is dependable. And who needs an equally dependable set of wheels for his long everyday work commute.

And for those looking for a dash of excitement in their drive, we would nudge you towards the 1.5L turbo diesel with the DSG. It’s simply another level.