Chikmagalur, 05 December 2016: Karna Kadur and Nikhil Pai jumped to the lead of the MRF FMSCI Indian National Rally Championship (INRC) standings after winning the Coffee Day India Rally in their Volkswagen Polo, with an overall time of 1:52:15.9. Favourites Amittrajit Ghosh and Ashwin Naik failed to finish the event after a mechanical failure in their Mahindra XUV500, after leading the event by 27.6 sec with just one special stage to go. Dr. Bikku Babu and Milen George finished second overall, 1:15.5 adrift, and was also the second placed finisher in the INRC 2000cc category which was won by Kadur as well. Coming in third overall as well as in the INRC 2000cc category was Rahul Kanthraj and Vivek Bhatt with a time of 1:55:27.6. 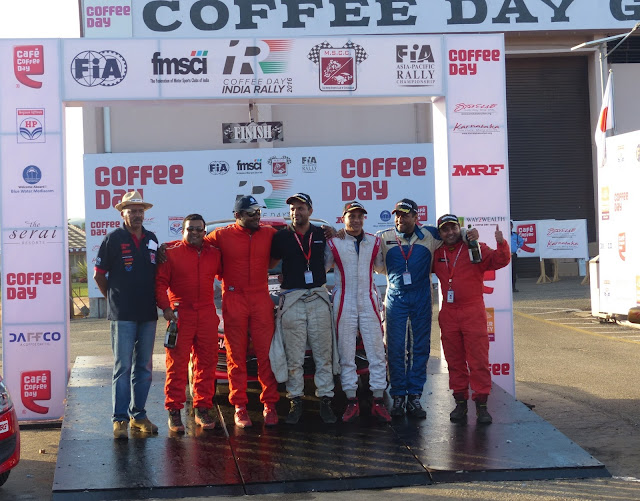 The Coffee Day India Rally was Kadur’s first win of the season and he, along with Pai took home INR 50,000/- in prize money.  The Bangalore based 28yr old is the fourth different winner this year in as many rallies, with the opening three won by Amittrajit Ghosh, Gaurav Gill & Arjun Rao respectively. Kadur had also finished second in the previous round, the MRF Rally de North, heading into the championship’s two-and-a-half month long mid-season break. He pockets 25 points for the win but was denied the maximum 39 available this weekend with victory in the two legs – worth seven points each – split between him and Ghosh. The win puts him at the championship lead held by Ghosh till now, setting the stage for a two-way title showdown between him and Dr Babu, in the fifth and final round of the season to be held in Bengaluru later this month.

The Coffee Day India Rally is the Indian rallying season’s blue-riband event and the only rally on the calendar to run across three days.