Sindhu and Sakshi displayed extreme grit & determination at the highest level in their respective sport, emerging as true role models for the Indian youth after putting India on the Olympic world map. Their qualities exemplify Mahindra’s own RISE philosophy of ‘Accepting No Limits’ and ‘Driving Positive Change’ by altering society’s perception of what a courageous, confident and determined woman can achieve. 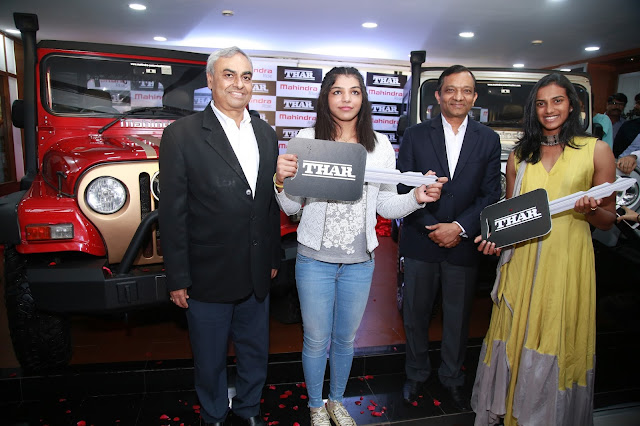 P V Sindhu said, “I am thankful to Mahindra for recognizing my efforts and encouraging me to excel in future matches. The Thar is an iconic off-roader and I am looking forward to owning and driving this stylish off-roader.”

Sakshi Malik added, “I am very pleased to own the Thar and would especially like to thank Mr. Mahindra for this very special gesture and the #TharForSakshi Twitter Campaign, which received overwhelming support. With its rugged looks and power-packed performance, the Thar is indeed a great compliment to my personality.”

Thar, is a cult off-roader targeted at off-roading enthusiasts and plays a significant role in shaping the lifestyle vehicle segment across urban and rural India. Not many vehicles share the same legendary past and iconic status of the Mahindra Thar which has the ability to triumph over any terrain and reflects the company’s tough and rugged DNA.