Greater Noida/Delhi, 03 February 2016: Audi launched its most powerful and fastest production ever – the next generation Audi R8 V10 Plus, at the Auto Expo 2016. Generously inspired by the racetrack, the Audi R8 has motorsport in its genes, with almost 50% components from the Audi R8 LMS. It is powered by the monstrous 5.2 FSI quattro® engine, has a power output of 610 hp@6500 Nm of torque, a top speed of 330 km/h, and does the 0 to 100 km/h sprint in just 3.2 seconds. 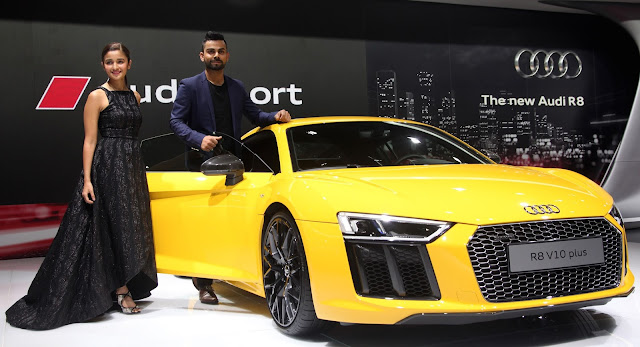 Much lighter than its predecessor, the next generation Audi R8 V10 Plus is priced at INR 2.47 crores (ex-showroom Mumbai and New Delhi). The exhaust notes are fuller and sharper than before, and the seven-speed S tronic® transmission delivers gear changes within hundredths of a second and with virtually no break in acceleration. Audi Drive Select matches the ride dynamic to the friction coefficient of the road at the flick of a button. The newly developed quattro® drivetrain also works with Audi Drive Select, enabling all-wheel-drive adaptability for better traction and control. Direct injection in the high- revving V10 yields short fuel injection times, resulting is noticeable, improved power delivery, enhanced cooling and improved fuel efficiency upto 13%.

In addition to the Audi drive select feature, the Audi R8 V10 Plus also comes with a ‘Performance Mode’ for better traction in dry/wet and snow conditions. Preset coefficient parameters alter the traction control for optimum performance. For the times when you don’t need the full power of the all-new Audi R8 V10 Plus, advanced Cylinder-on-demand technology automatically shuts down five of the 10 cylinders; improving fuel consumption, particularly in city traffic. Accelerate on the open road again, and within milliseconds, all ten cylinders – and full engine power – are seamlessly back in action. 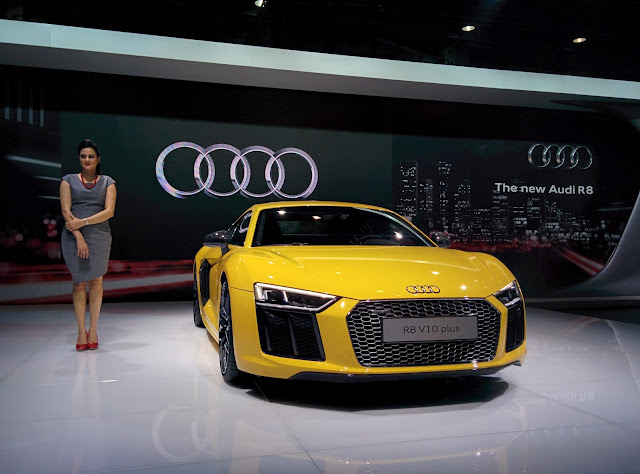 The Audi Space Frame® (ASF) makes the R8 even more agile than before and is directly linked to the Sport suspension for enhanced driving dynamics. It is now almost 50kg lighter and 40% stiffer. It comes with Audi Laser Light technology that illuminates dark corner and sends out a narrow laser beam of white light further and brighter than conventional LED high beam.

The new R8 V10 plus is 4.42 meters long and 1.94 meters wide, with its cabin placed far forward, a long back and relatively short wheelbase. The design and aerodynamics make it lighter, flatter and more muscular than before with re-designed side blades for maximum rear tension and a fixed spoiler on the V10 plus. Gloss Carbon elements give the V10 plus an unmistakable motor-racing look, while a fixed rear spoiler provides greater downforce for enhanced grip in corners.

The highly customizable interior features lightweight bucket seats and a Monoposto cockpit design with refined materials, precise workmanship and innovative technologies. There is a 226L cargo space behind the seat, which supplements the 112L luggage compartment at the front. The vehicle sits on factory-installed 19″ forged wheels in 5-twin-spoke design in matt titanium look.

The Audi Virtual Cockpit has a fully customizable digital display. Combining the functions of a central MMI monitor and conventional instrument cluster in one high-resolution display, it depicts information in razor-sharp, high-contrast quality. The choice of views – ‘Classic’ or ‘Performance’, puts vital driver information right in front, with a flexible, responsive display. Performance view shows additional information such as torque, power, oil and tire temperatures, g-forces and lap times on the race track. MMI navigation plus with MMI touch is standard, and offers smartphone like capabilities including free text search.

Just like in a race car, the interior is driver focused, with the steering wheel, instrument cluster and road all lined up along one central visual axis. Drivers can operate all important functions with the multifunction and satellite push-buttons without having to take their hands off the steering wheel or look away from the road. The steering wheel has 20 controls, including 4 new satellite buttons. Engine start-up, exhaust sound, driving dynamics and gear changes can all be controlled from the buttons on the R8 performance steering wheel.