Mumbai, 20 July 2015: From Asansol, West Bengal to the Base Camp of Siachen Glacier in Ladakh. Through rugged terrain and extreme weather conditions. Covering 7000 kms. over 20 days. In a Tata Nano. 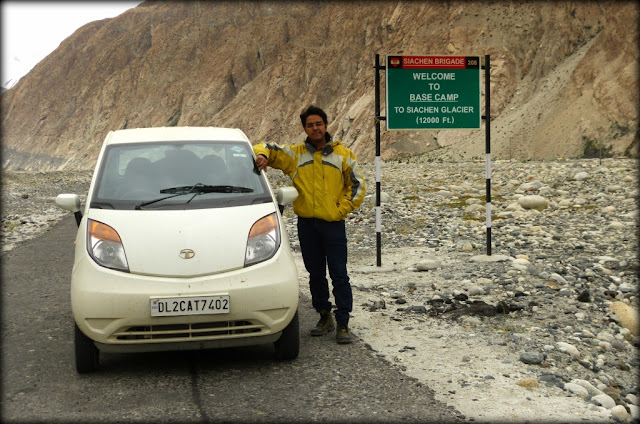 In what can be summed up as a brave attempt for a road trip, adventure traveller and car enthusiast Dr. Varun Vagish from Asansol took his Nano where no Nano had ever been before. Passing through Khardong La (18,380 feet) and other passes like Chang La, Zozi La, Fotu La and Namik La, Dr. Vagish and his Nano triumphed against all odds in a test of endurance and reliability to reach the Base Camp of Siachen Glacier in Ladakh.

At the end of the trip, Dr. Varun Vagish said, “Being a rear wheel drive car, Tata Nano was a mobile powerhouse while climbing the steep inclines of the highest mountain passes. Lowest turning radius also helped me to easily manoeuvre the vehicle on sharp curves. It just took 30 minutes to climb the last 16 kilometres stretch from North-Pulu to Khardung-la, the world’s highest motor able pass. In the plains, it was driven for more than 800 kms a day on a few instances. During the whole journey, I felt immense respect for the whole team of Tata Motors who conceptualized and shaped this beautiful vehicle.”

Known for its innovation and frugal engineering, the Nano isn’t exactly built for endurance, but this attempt by Dr. Vagish proves that the vehicle does have the capability to push the limits. The latest version of the car, GenX Nano, is stylish, efficient and smart; with advanced technological features which further strengthens its positioning as a perfect smart city car.

Share your #NanoTales with us and we will publish it here.