Mont-Tremblant, Québec, 28 July 2015: Nissan GT Academy drivers, Abhinay Bikkani and Thanaroj Thanasitnitike, finished first and second respectively, in the fifth and sixth rounds of the Nissan Micra Cup, which took place this past weekend at the Circuit Mont-Tremblant. The race, which was held in the majestic Laurentides region of Quebec, saw the first six finish within 2.5 seconds. 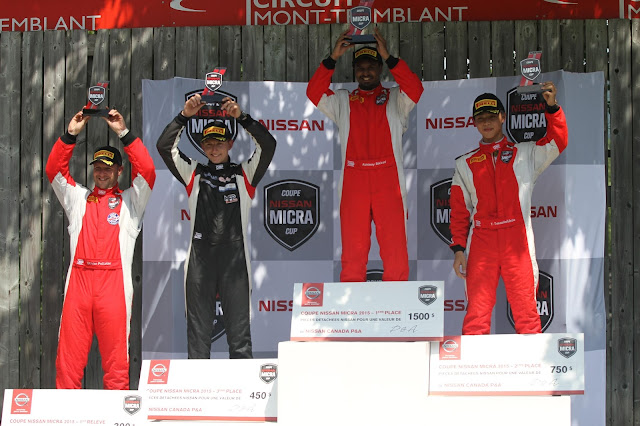 Thanaroj Thanasitnitike started Sunday’s race in pole position. The first lap resulted in a hit that forced Metod Topolnik to abandon the race, soon followed by Valérie Chiasson and Yves Aubé. Grouped at the front of the pack, Bikkani, Thanasitnitikate, Rzadzinski and Bédard crossed the finish line in the same order, separated by just over one second. Valérie Limoges completed the top five, just as the night before, ahead of Olivier Pelletier who earned his second novice win of the season. Jacques Bélanger finished seventh ahead of Marc-Antoine Demers, Kevin King and Louis-Philippe Montour, who made his series debut this weekend.

In the drivers’ championship, Thanasitnitikate (216 points) retook the lead ahead of Olivier Bédard (202). Rzadzinski remains in third (180) ahead of Bikkani (155) who took over fourth place from Valérie Chiasson (121). Metod Topolnik still leads the novice championship.

With this outing finishing at the Circuit Mont-Tremblant, drivers and organizers of the Nissan Micra Cup will meet once again for two new races next weekend at the Grand Prix de Trois-Rivières.