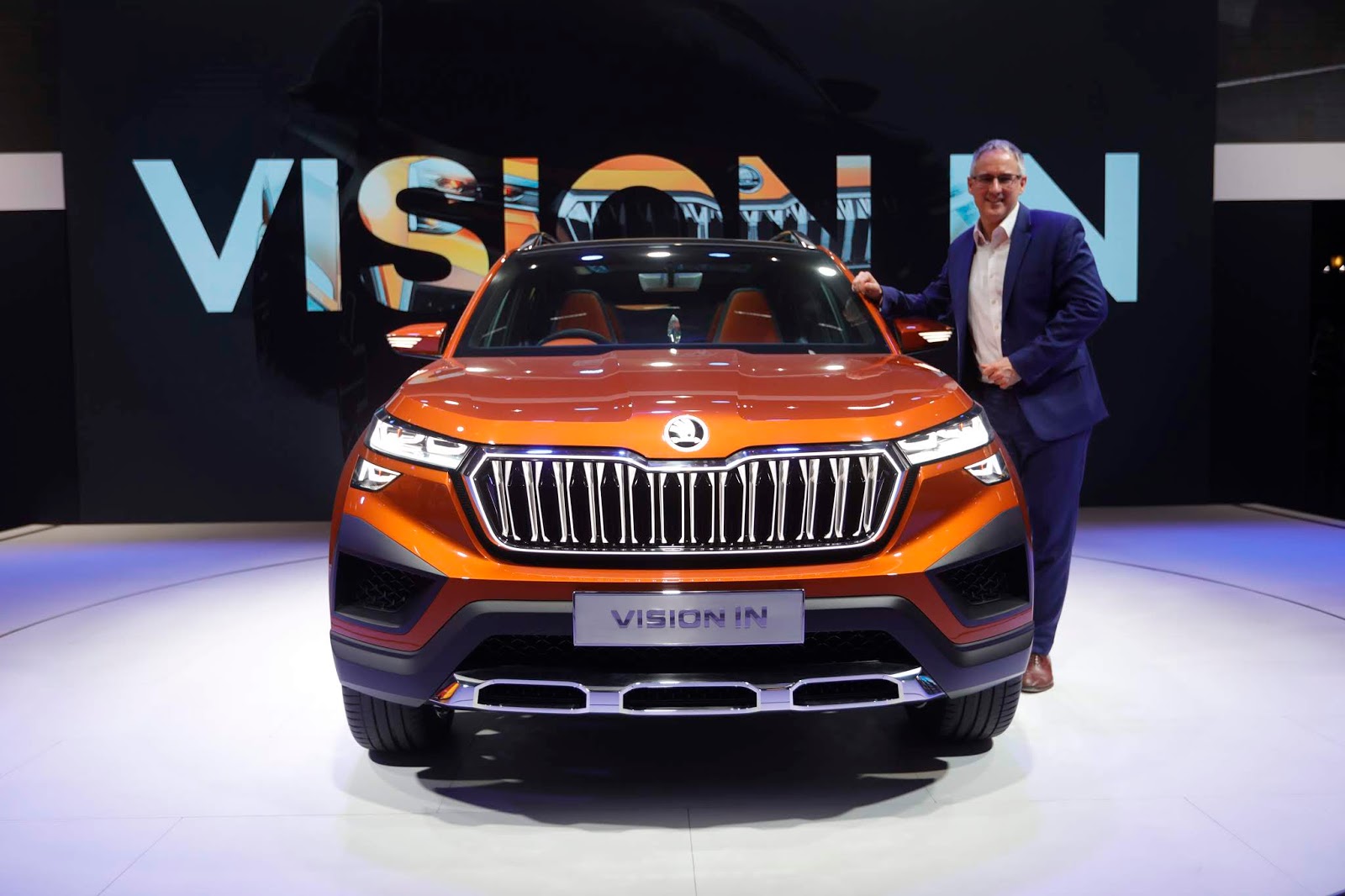 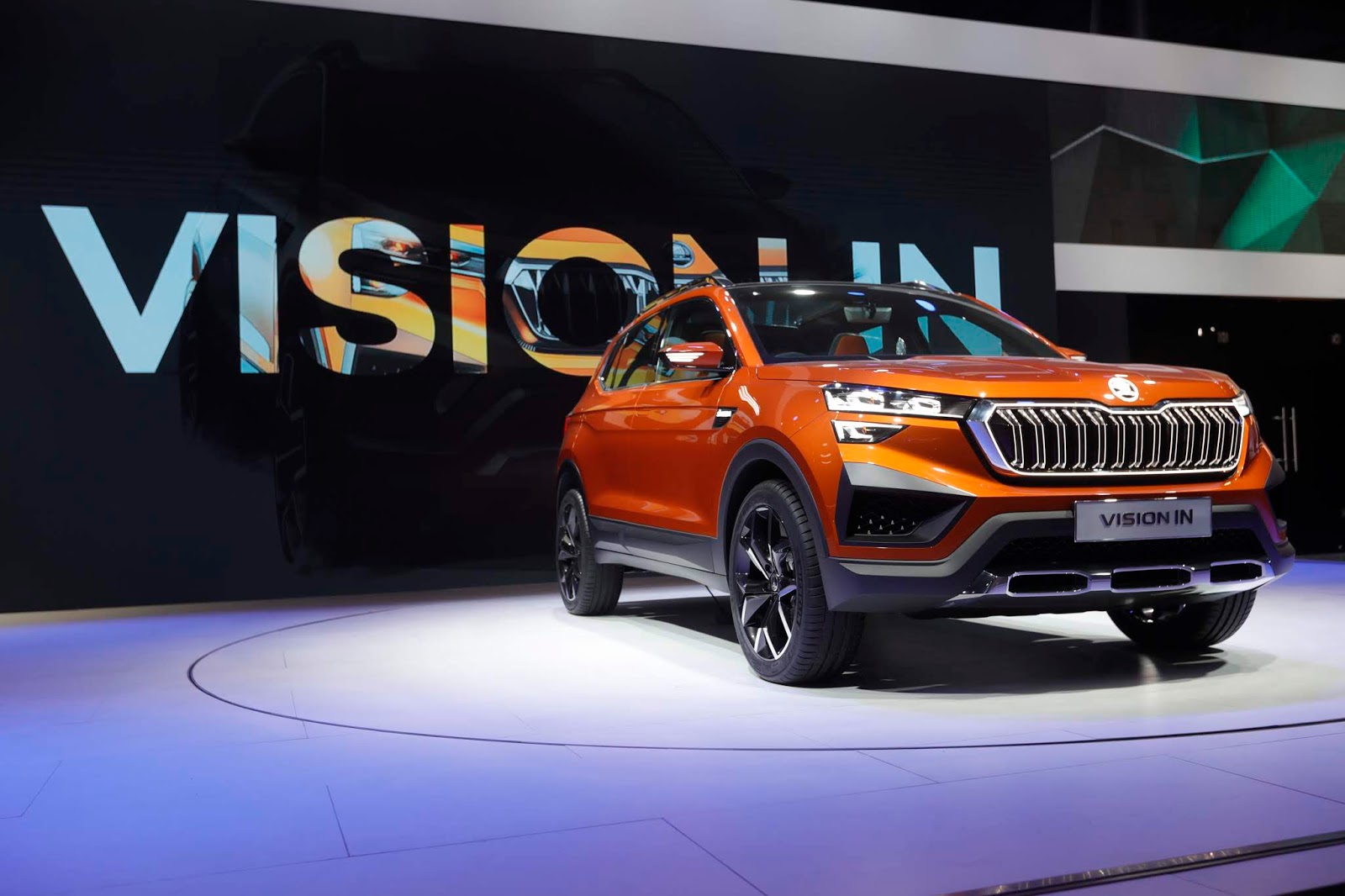 ŠKODA AUTO India unveiled the Vision IN – a mid-size SUV concept study, designed and developed under the ŠKODA AUTO led ‘INDIA 2.0’ project of the Volkswagen Group. The Czech marque also showcased the flagship SUV KODIAQ 2.0 TSI, the new KAROQ 1.5 TSI, the Laurin and Klement as well as the Sportline variants of the facelifted SUPERB, the powerful OCTAVIA RS 245, and the Monte Carlo and the Matte Concept of the RAPID 1.0 TSI. To commemorate its 125 year anniversary, ŠKODA AUTO also presented the luxurious 1948 SUPERB OHV.

The Vision IN blurs the line between beauty and functionality. It is a vehicle tailored to meet the needs and aspirations of the Indian subcontinent and testifies an interplay of the Czech Bohemian glass work as well as the traditional Kalamkari art. The mid-size SUV will be launched in 2021.

Featuring a distinctive front and large bonnet, the VISION IN’s ŠKODA SUV family resemblance is clear at first glance. The wide ŠKODA grille features double slats; both the frame and the slats are made of lead crystal, and enhanced by LED illumination. The two-part LED headlights also exhibit crystalline structures. In the upper part, which reaches as far as the ŠKODA grille, stunning glass elements create the LED dipped beam, LED high beam and an L-shaped LED module for the daytime running lights and indicators. The LED fog lights are arranged below this. The upper section of the sculpted bumper has been given added depth, is body-coloured and incorporates a wide, crystalline, mesh-effect air inlet. The lower section consists of a rugged, aluminium front spoiler.

The straight roof line with panoramic glass roof and buffed aluminium roof rails conveys a sporty appearance. A three-dimensional tornado line makes the vehicle look longer, while the powerful wheel arches make it appear brawny and self-assured on the road. This impression is reinforced by the car’s bold, sculptured plastic side trims in matt anthracite and the 19″ alloy wheels with polished surfaces create a light and shade effect. The side profile of the chrome framed windows extends all the way to the D-pillar and, exhibiting a slanted rear window and ‘ŠKODA’ in block lettering, the rear is powerful and uncluttered. Razor-sharp, L-shaped LED tail lights together with horizontal reflectors form the ŠKODA-typical ‘C’ of the light cluster. A crystalline strip of light between the reflectors provides yet another visual touch, further splitting the rear into individual sections and lending it a more structured overall appearance; a rugged aluminium diffuser completes the lower section.

The interior of the VISION IN concept study is characterised by the new ŠKODA design language. The elongated dashboard picks up the symmetrical contours of the ŠKODA radiator grille and incorporates air vents featuring the brand-typical SUV design. The ŠKODA designers have also broken new ground when devising the decorative trim that adorns the dashboard and have drawn inspiration from Indian culture. The decor pays homage to the traditional Indian textile printing technique, in which classic motifs are printed onto fabric using handmade East Indian rosewood stamps. At the same time, the characteristic ŠKODA crystal seam on the dashboard and door panels as well as decorative armrest trims made of genuine crystal make reference to the traditional Czech art of glass cutting. An all-new crystal button on the dashboard acts as a bridge to the modern world: using this button, the driver can communicate with the infotainment system’s digital assistant in the same way they would if they were using the free standing 12.3″ central screen.

The VISION IN’s technology also include the individually configurable Virtual Cockpit and shift-by-wire technology. The gear selector is no longer connected to the 7 speed DSG mechanically. Instead, it relays which gear has been chosen electronically. The classic selector lever has been replaced with a small rocker switch for operation. The convenient electromechanical parking brake means the familiar handbrake lever is also no longer required. This creates a new sense of spaciousness and makes it possible to keep the centre console much smaller and tidier. The gained space resulting from this has – in typical, ‘Simply Clever’ ŠKODA fashion – been used for several new storage compartments. The three spoke steering wheel is another important component of the new interior concept.

Alongside wood and natural leather, the VISION IN also makes use of vegan as well as recycled materials. The floor mats are made of Piñatex, for example. Pineapple leather, as it is also known, is a leather like fabric made from waste pineapple leaves. The concept study’s roof lining is made from recycled plastic fibres and – owing to the transition from black to orange that is drawn across the entire roof – provides another distinctive visual highlight. 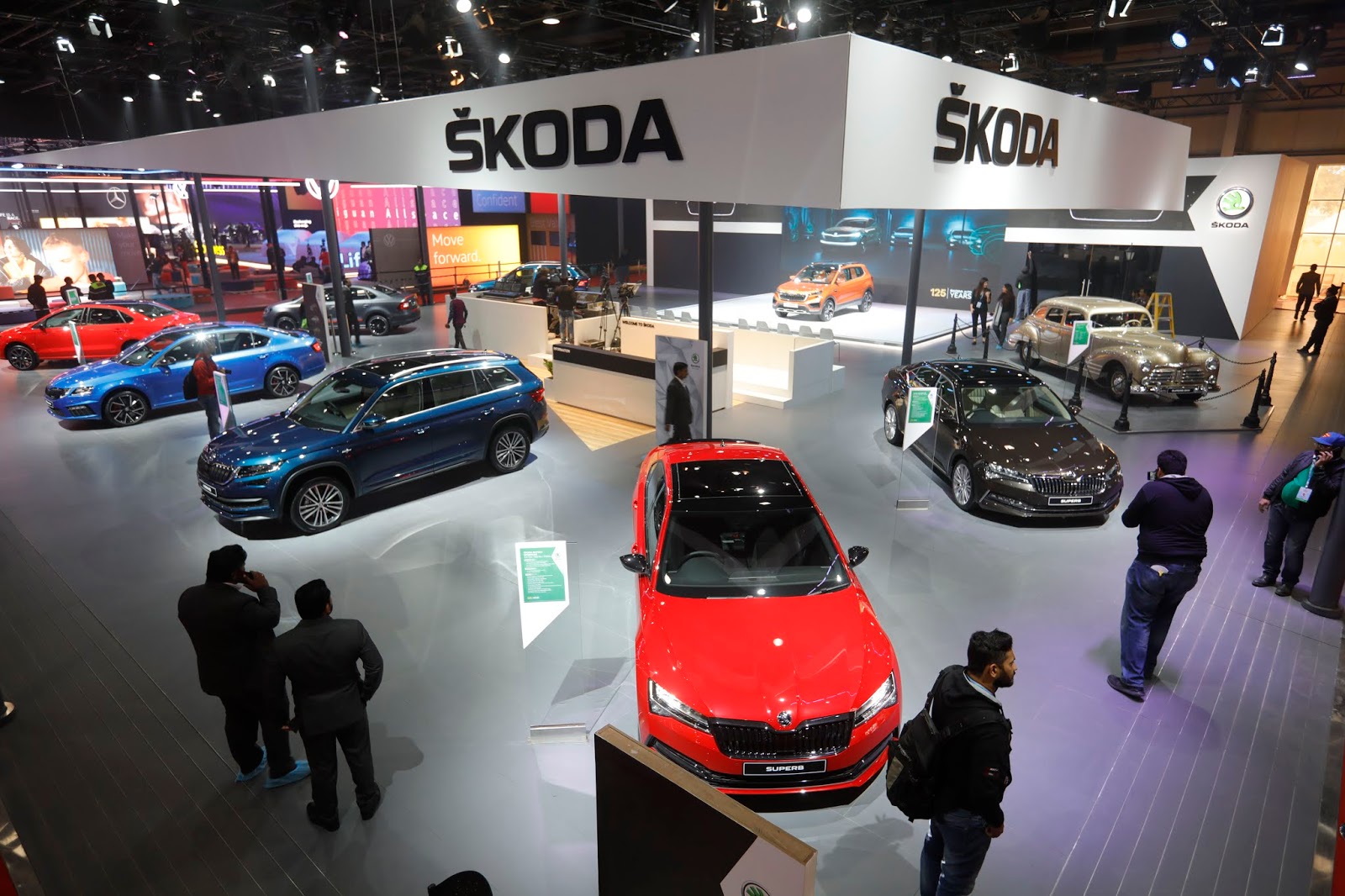 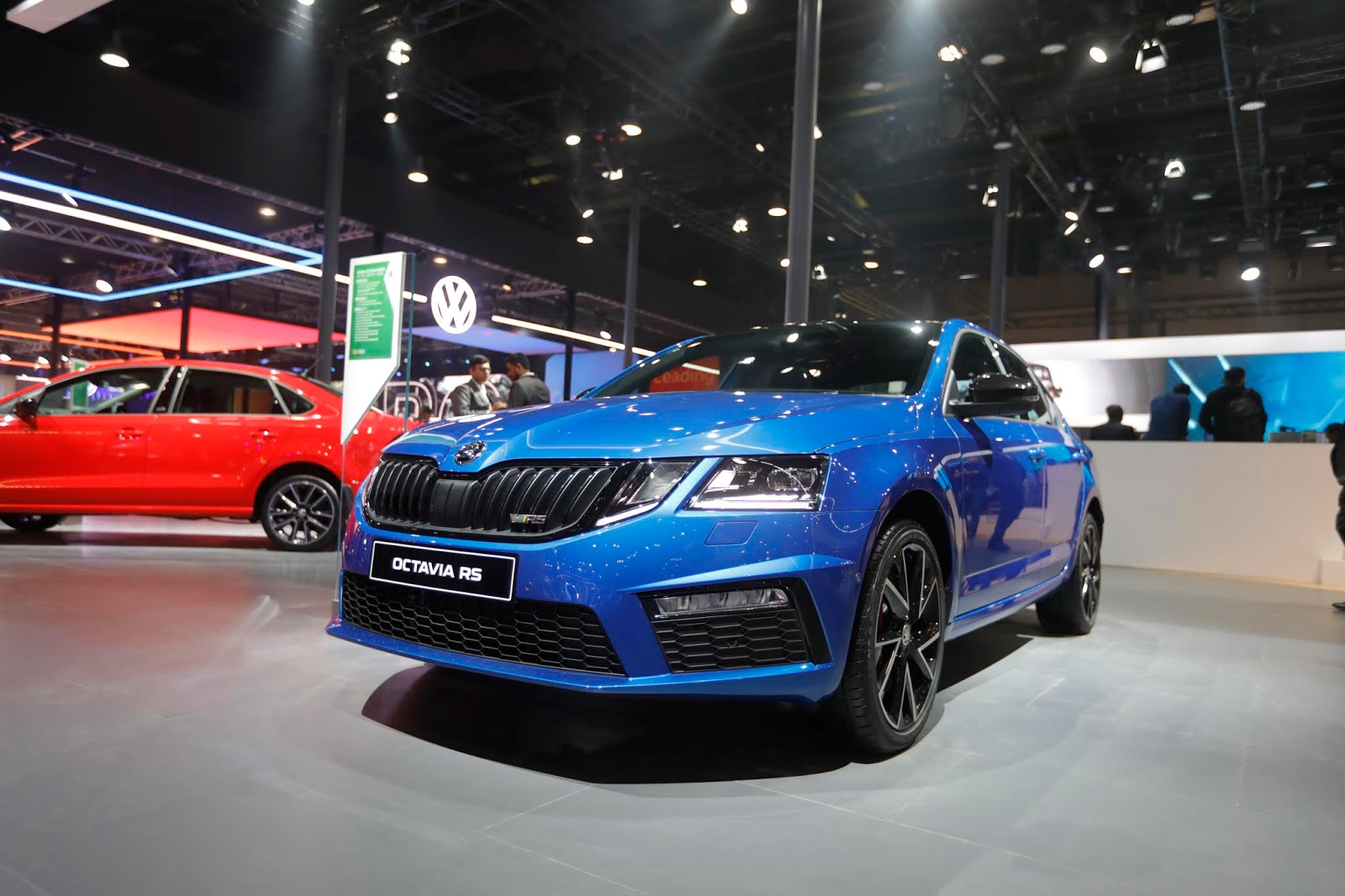 OTHER ŠKODA AUTO MODELS ON DISPLAY

Alongside the KAROQ featuring a 1.5 TSI engine with a power output of 110 kW (150 PS) as a newcomer to the Indian market, ŠKODA is also showcasing a SUPERB L&K and a KODIAQ L&K, each fitted with a 2.0 TSI delivering 140 kW (190 PS), at the Auto Expo 2020. The sporty OCTAVIA RS 245 producing 180 kW (245 PS), the RAPID 1.0 TSI in the MONTE CARLO trim level and Matte Concept, as well as a 2.0 TDI SUPERB SPORTLINE 140 kW (190 PS) round off the ŠKODA models on display at the exhibition. In addition to current models, ŠKODA will also exhibit a 1948 ŠKODA SUPERB OHV at its stand. The vehicle equipped with bodywork manufactured in the Kvasiny plant has been lovingly restored over the last three years.