The new Kia K5 is a fastback evolution of Kia’s global best-selling sedan, combining a striking new design with a driver-focused interior, cutting-edge technologies, and all-new powertrain options. One of the most high-tech cars in its class with a range of in-car features, it goes on sale in global markets during the first half of 2020.

Powered by a range of efficient and powerful Smartstream engines, it marks the debut for Kia’s new eight-speed DCT, and comes for the first time with an all-wheel drive (AWD) system, in addition the standard front-wheel drive system.

Greater levels of cabin, high-tech safety features, and revised chassis characteristics mean the K5 is more relaxing, confidence-inspiring and engaging to drive than ever before.

The K5 was first introduced in 2010 and the design heralded a step change in how the brand was perceived across markets all over the world. Now, two generations later, the new K5 with its fastback design is one of the most advanced and sportiest cars to come out of the Kia manufactory.

The exterior is sporty and svelte and has been designed in collaboration between all three of Kia’s design studios in North America, Europe and Korea. The front is characterised by an evolution of Kia’s ‘tiger nose’, integrating its LED headlamps into the grille, with a ‘heart beat’ daytime running light signature expressing the heightened levels of emotion the car is meant to inspire. The K5 features a more aggressive front, with the grille nestled beneath a subtle overhang on the hood’s leading edge, parenthesised by angular air curtains and a wider air intake in the lower half of the bumper.

In its profile, the K5 displays a greater sense of muscularity, with the body narrowing slightly at the midpoint between wheel arches. It is inspired by the ‘coke bottle’ shape of the Stinger’s body. The shoulder line gradually rises, narrowing the glasshouse towards the rear of the car and giving it a sportier, ‘lean-forward’ stance when viewed from the side. The K5’s proportions are key to its sportier attitude. While the height of the vehicle has been cut by 20 mm (to 1,445 mm), the car’s overall length has been extended by 50 mm (to 4,905 mm), its width by 25 mm (to 1,860 mm), and its wheelbase by 45 mm (to 2,850 mm). Longer, lower and wider than ever, the K5’s demeanour on the road is transformed into one of greater on-road stability and maximum driver engagement.

The car also features a modern interpretation of the chrome window line that has historically adorned executive sedans. Lunging backwards from the base of the A-pillar and over the top edge of the glasshouse, it unifies the side and rear design by looping around the base of the rear screen, and back around the other side, adding greater drama to its flowing, fastback roofline.

Topped by this flash of chrome, the rear of the K5 also boasts a new lighting signature, with its predecessor’s standalone light units replaced by a new LED daytime running light which spans the width of the rear deck. The dashes of light that extend across the tailgate echo the ‘heart beat’ shape of the front lights, while a subtle ducktail shape to its rear deck is matched by a sportier lower bumper design and a chrome dual muffler design.

The K5 will come with a choice of 16″, 17″ and 18″ machine-cut aluminium alloy wheel designs and a wide range of paint colours. The K5 GT models will also be offered with a unique 19″ wheel design, as well as more aggressive front and rear bumpers, special ‘GT’ badges, and dual twin exhaust tips.

The interior sports a driver-oriented cabin design with greater space and is elegant by design. With a timeless, minimalist layout, the futuristic interior is trimmed in a selection of tactile materials while the wide and horizontal symmetry creates a sense of space and harmony.

The wide dashboard is characterised by the integration of Kia’s latest infotainment systems, showing the next-generation design language that the brand will adopt across other models in the future. Replacing the infotainment screen integrated into the surface of the previous-generation’s dashboard, the new car sports a wide infotainment display which is physically attached to the instrument cluster in front of the driver. In certain models, the optional 10.25″ touchscreen sits alongside Kia’s new 12.3″ digital instrument cluster, displaying information clearly just below the driver’s line of sight over the road ahead.

Additional technologies are subtly integrated into the cabin of the K5, with an available Mood Lighting system and wireless phone charging. The K5 also features a powerful 12-speaker BOSE surround-sound audio system for an immersive in-car listening experience.

Depending on market, the new K5’s cabin can be upholstered in a wide range of single and two-tone colour schemes, with cloth, synthetic leather and leather options. The dashboard is finished in a series of metallic and wood-effect surfaces for a more sophisticated appearance and feel, depending on vehicle specification.

In terms of performance, the new K5 is available with a range of new ‘Smartstream’ powertrains from Kia, and – for the first time – a new all-wheel drive system. The powertrain delivers greater efficiency and refinement than ever.

The availability of a new all-wheel drive (AWD) system is an important introduction. It is the first time such a drivetrain has been offered on Kia’s D-segment sedan. Available with certain engines depending on market, the AWD system offers buyers enhanced dynamic capability in conditions where traction is reduced, shifting power to the rear axle based on driver inputs and road conditions. The K5 remains front-wheel drive as standard. 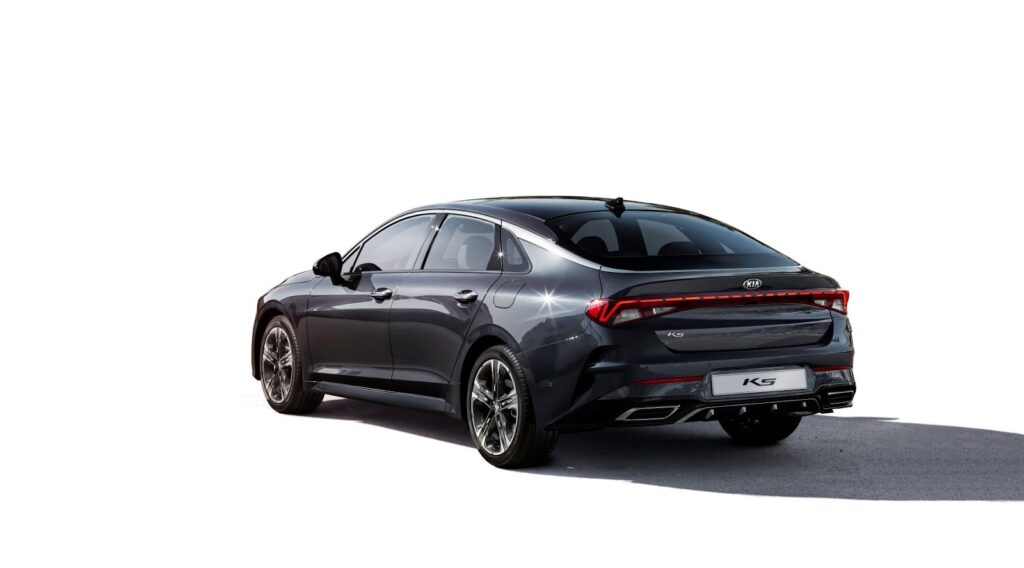 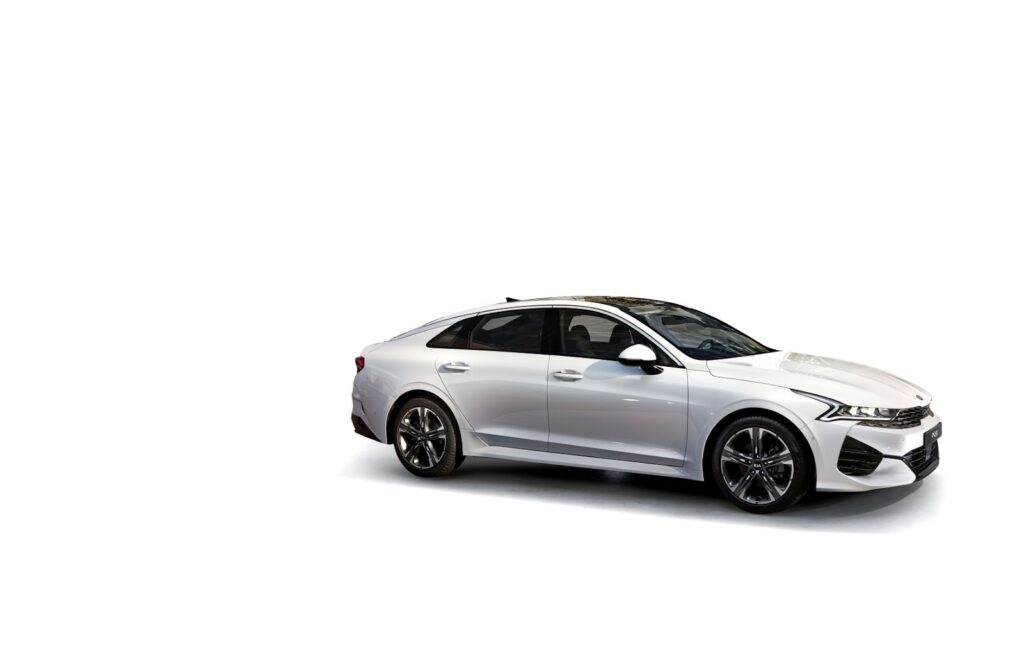 In addition, the K5 GT – available in North America – is powered by a high-performance 2.5L T-GDi turbocharged gasoline engine, with power and torque outputs of 290 ps and 422 Nm, respectively. The 2.5L T-GDi engine is capable of powering the K5 GT from 0 to 100 kph in around 6.6 seconds.

As with previous generations of K5, hybrid powertrain options will also be available.

The K5 offers a tailored driving experience thanks to its Drive Mode Select system, which enables drivers to adapt the car’s acceleration, steering and gear shift characteristics on the fly. ‘Smart’, ‘Comfort’, ‘Eco’, ‘Sport’ and ‘Custom’ modes allow drivers to alternately maximise fuel efficiency, refine the handling experience, or enhance the responses of their vehicle to driver inputs.

The K5’s suite of advanced safety, connectivity and infotainment technologies make it one of the most high-tech, comprehensively-equipped cars in its class. The voice recognition software allows drivers to use voice commands to control a range of features in the car, including climate control, electric windows, heating for the steering wheel, seats and rear glass, and the audio system. The cabin incorporates an optional 10.25″ touchscreen infotainment system, incorporating audio-visual navigation, and Kia’s new 12.3″ high-resolution digital instrument cluster, providing crystal-clear information to the driver.

The K5 is also available with an 8.0″ head-up display, which projects driving information on to a small glass panel in the driver’s line of sight. The system displays alerts from the car’s numerous driver assistance technologies, details of vehicle speed, and turn-by-turn navigation instructions.

The new K5 is also the first Kia available with the company’s new Remote Smart Parking Assist (RSPA), which enables drivers to move their car autonomously out of a front-and-back parking space remotely with their key fob.

The K5 is fitted with up to nine airbags, as well as a suite of electronic vehicle safety systems. All K5 models are equipped as standard with Kia’s Vehicle Stability Management (VSM) and Electronic Stability Control, helping drivers maintain control under braking and cornering.