Singapore, 30 November 2017: The J.D. Power 2017 India Initial Quality StudySM (IQS) reveals that problems reported per 100 vehicles by new-vehicle owners has declined significantly over the past five years, except in areas related to heating, ventilation and cooling (HVAC). 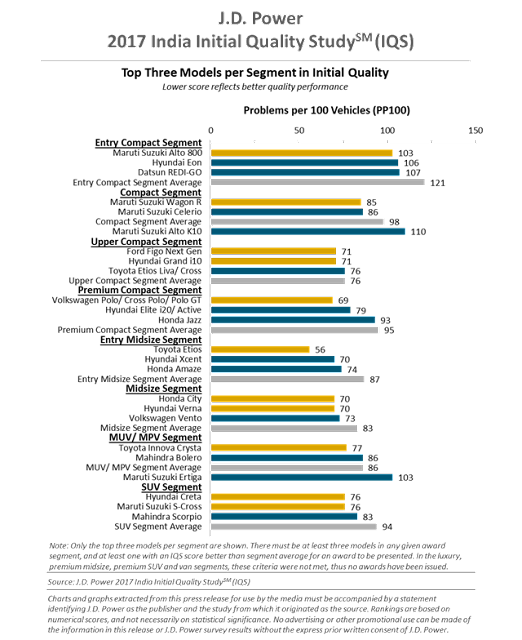 Problems in engine and transmission remain the most frequently reported issues, but there has been an improvement of 9 PP100 in the last five years (39 PP100 in 2013 vs. 30 PP100 in 2017). Problem reporting has either remained the same or has improved in all other categories except HVAC, with new-vehicle owners reporting more problems related to the quality of air conditioning effectiveness, compared to five years ago (22 PP100 in 2017 vs. 15 PP100 in 2013, respectively).

While both petrol and diesel models have shown strong improvements in initial quality since 2013, the rate of improvement for diesel models is much higher at 37 PP100, compared with petrol models, which have improved by 8 PP100.

Owners who received detailed explanations on the operation of their vehicle features at delivery report fewer problems than those who do not (95 PP100 vs. 103 PP100, respectively).

Toyota also receives awards in two segments: the Etios (56 PP100) in the Entry Midsize segment and the Innova Crysta (77 PP100), in its debut year, in the MUV/ MPV segment.

The 2017 India Initial Quality Study (IQS) is based on responses from 8,578 new-vehicle owners who purchased their vehicle from November 2016 through July 2017. The study includes 83 models from 17 makes and was conducted between May-September 2017, across 40 Indian cities.