New Delhi, 12 June 2017: Triumph’s state-of-the-art roadster, the Street Triple S was launched in India today. One of the most agile and addictive street bikes in the middleweight naked category, the 2017 Street Triple S is leaner and lighter than the previous generation, and built for the sheer joy of everyday riding. It is powered by a new race bred 765cc engine derived from the Daytona, but with a major step up in power and torque. This is the same engine that is set to power the FIM Moto2 World Championship from the 2019 season onwards.

The engine delivers a peak power output of 113 PS @11,250 rpm and peak torque of 73 Nm @10,421 rpm. With more than 80 new parts including new crank, pistons and Nikasil plated aluminium barrels and an increased bore and stroke, it offers significant advancement in performance, particularly in the low-down and mid-range. There are 2 riding modes – road & rain, which help the rider better harness the increased power and torque in every riding condition. 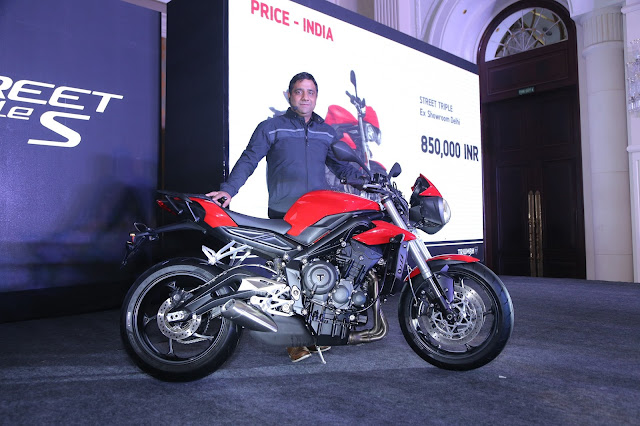 The Street Triple S has a richer and more distinctive exhaust growl, stronger acceleration and slicker gear changes thanks to a combination of revised gearbox geometry and shorter 1st and 2nd gear ratios. Triumph’s obsessive attention to detail is evident in this one too, with a high quality finish and detailing throughout, to match the high level of specifications.

Rider focussed technology include a ride by wire throttle which combines with the ABS and traction control for enhanced control and safety. There is a fully revised LCD instrument pack which allows the rider to select the riding modes on the move or at standstill, and access key information from the on-board computer, including speedometer, rev counter, riding mode symbol, gear position display, fuel gauge, odometer, trip meter and journey distance. A quickshifter can be added as an option, which allows for clutch-less upshifts that are up to 2.5 times quicker than a skilled rider using a standard clutch upshift.

It comes with new DRL headlights that are 4.6x brighter than before, and is fitted with premium Pirelli Diablo Rosso Corsa tyres for sharper and precise handling, stability and road grip. Overall, it has more attitude and a sharper athletic poise; inspired by the ‘nose-down’ design of the latest generation Speed Triples.

The ex-showroom price of the Street Triple S is INR 8.50 lacs and it comes in two colour options – Diablo Red and Phantom Black (metallic). Bookings are already open and deliveries would begin in the month of July 2017.