New Delhi, 08 March 2016: Anand Mahindra, CMD of Mahindra & Mahindra, was conferred the Chevalier de la Légion d’Honneur (Knight of the Legion of Honour) by H.E. Mr François Richier, Ambassador of France to India. Created in 1802, the Legion of Honour is the highest civilian award given by the French Republic for outstanding service to France, regardless of the nationality of the recipients. Mr. Mahindra was awarded the distinction in recognition of his outstanding national and international achievements and initiatives at the helm of the Mahindra Group. 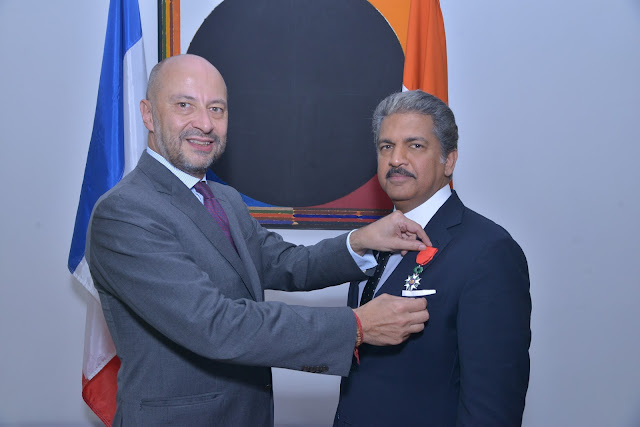 One of India’s most prominent business leaders, Anand Mahindra has been instrumental in taking the group global, and shaping it into a company of outstanding repute. Under his leadership there have been several partnerships between French and Indian industries, including an earlier automobile JV with Renault and the recent acquisition of Peugeot Scooters France in 2014. Group company Tech Mahindra also has interests in France, with a commercial office in Paris and R&D and engineering centre in Toulouse.

He serves on various boards and committees, and is also known for his philanthropy and promotion of both primary and higher education. In 2014, Mahindra Ecole Centrale College of Engineering was founded in Hyderabad through the joint collaboration of the Mahindra Group with the prestigious Ecole Centrale Paris Engineering College.