Mahindra is one of the few manufacturers to develop an all new electric powertrain for a racing series. The M2Electro was developed to Mahindra specifications with world leading manufacturers including McLaren and Hewland, and designed to compete in the second season of the Formula E championship. It showcases technology that will eventually find its way into new electric road cars and does 0-100 km/h in under 3 seconds. 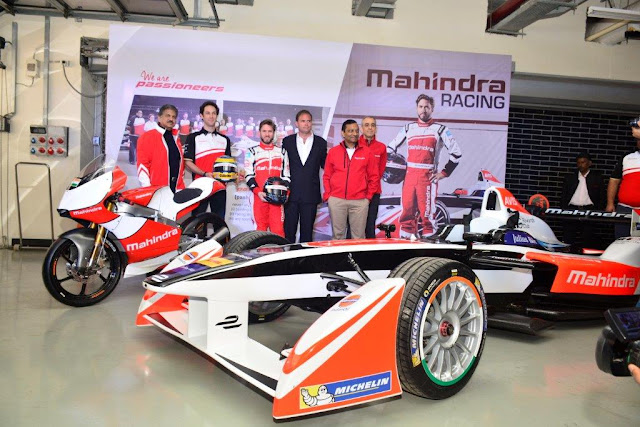 Formula E cars represent the future of electric car technology with racing taking place on city streets on all-weather treaded tyres that are similar to the tyres on road car. The narrow, bumpy street tracks are a demanding test ground for racing, and the M2Electro has excelled with no mechanical failures in its first few races in season two of Formula E.

Piloted by former Formula 1 stars Bruno Senna and Nick Heidfeld, the M2Electro has scored the team’s maiden podium finish on its first outing in Beijing. Each driver races two Formula E cars during a race. During a mandatory pit stop about half way through the race, the driver pulls into the garage and swaps to a second car within a specified time.

The MGP30 Racing Motorcycle has a new engine, gearbox and aerodynamic packages with several refinements to the chassis and electrical components. All these offer greater performance in tune with a new double exhaust system developed by Arrow.

New to the Mahindra family in MotoGP is Peugeot Motocycles factory team, SP Racing. An impressive line-up of Frenchman Alexis Masbou (28) and Briton John McPhee (21) will contest the Moto3 World Championship on an MGP3O-derived Peugeot.