New Delhi, 03 August 2015: India’s best-selling entry sedan for last three years has crossed the one million mark in cumulative sales in the month of July 2015. With this, the Swift DZire enters the elite club comprising Alto, Swift and Wagon R, which have also achieved this distinction in the past. 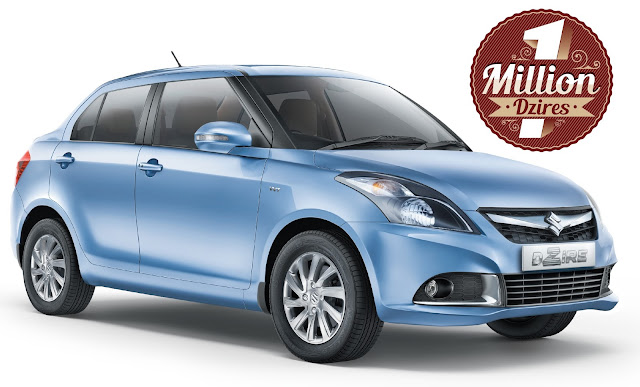 Launched in 2008, Maruti Suzuki DZire has been a category leader and has helped Maruti Suzuki strengthen its presence in the entry sedan segment. It is also exported to Africa, South America, Central America, Middle East ASEAN and SAARC countries. The cumulative exports till June 2015 were around 50,000 units.

The Swift DZire has consistently ranked amongst the top three sellers in the industry over the last three years. It is India’s best selling sedan and the second most fuel efficient with a claimed mileage of 26.59 Km/l (Diesel).

To celebrate the one million mark, Maruti Suzuki has lined up a month-long ‘The sweets are on us’ campaign. Through this campaign the Company plans to share the moment with everyone at large. “The sweets are on us” campaign includes sending edible direct mailers to the existing owners* and creating edible art installations inside malls by artists.