Gaydon, UK: Land Rover today unveiled the new Defender. An icon reimagined for the 21st century, it is clever, capable and safe for all the family, and in a category of its own. The new Defender is built for adventurous hearts and curious minds – for those who know the value of community and strive to make a difference.

The unmistakable silhouette is familiar yet new. The distinctive design makes the new Defender instantly recognisable, with minimal front and rear overhangs providing excellent approach and departure angles. Land Rover’s designers re-envisioned familiar Defender trademarks for the 21st century, giving the new 4×4 a purposeful upright stance and Alpine light windows in the roof, while retaining the side-hinged rear tailgate and externally-mounted spare wheel that make the original so identifiable. It looks tough and is tough, and the Defender is designed with purpose and engineered to excite. Iconic in name, shape and capability,  the Defender can be personalised to allow owners to make the most of their world.

The stripped-back personality of the original Defender has been embraced inside, where structural elements and fixings usually hidden from view have been exposed, with the emphasis on simplicity and practicality. Innovative features include a dash-mounted gear shifter to accommodate an optional central front ‘jump’ seat, which provides three-abreast seating across the front like early Land Rovers. As a result, the Defender 110 offers five, six or 5+2 seating configurations, with a loadspace behind the second-row seats of up to 1075L, and as much as 2380L when the second row is folded. The Defender 90 will be able to accommodate six occupants in a vehicle the length of a compact family hatchback. Durable rubberised flooring shrugs off the spills of daily adventures and once-in-a-lifetime expeditions, providing a brush or wipe clean interior. An optional full-length Folding Fabric Roof provides an open-top feel. It also allows passengers in the second-row seats of the Defender 110 to stand up when parked to provide the full safari experience. The new Defender is as technologically advanced as it is durable. It introduces Land Rover’s new Pivi Pro infotainment system, with a next generation touchscreen that is intuitive and user-friendly, requiring few inputs to perform frequently used tasks. Its always-on design guarantees almost instant responses. 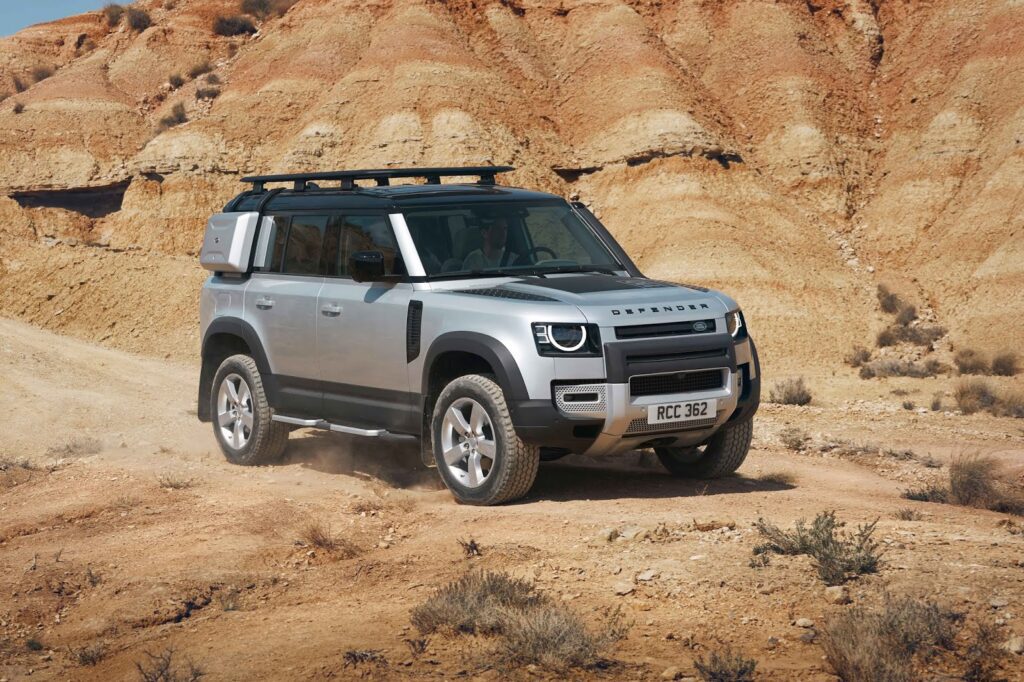 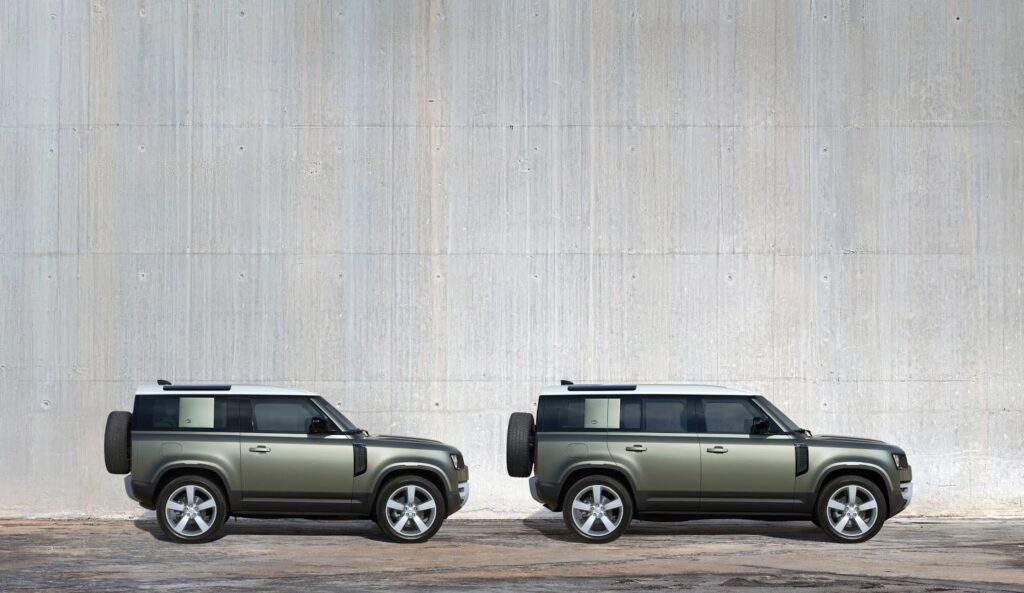 Land Rover’s new purpose-engineered D7x (for extreme) architecture is based on a lightweight aluminium monocoque construction to create the stiffest body structure Land Rover has ever produced. It is three times stiffer than traditional body-on-frame designs, providing perfect foundations for the fully independent air or coil sprung suspension and supports the latest electrified powertrains. The new Defender has been through more than 62 000 tests for engineering sign-off, while the chassis and body architecture have been engineered to withstand Land Rover’s Extreme Event Test procedure – repeated and sustained impacts, above and beyond the normal standard for SUV and passenger cars. During development testing, prototype models have covered millions of kilometres across some of the harshest environments, ranging from the 50 degree heat of the desert and sub 40 degree cold of the Arctic to altitudes of 10000 ft in the Rocky Mountains in Colorado.

A transformational breadth of capability sets the new Defender apart. Permanent all-wheel drive and a twin-speed automatic gearbox, centre differential and optional Active Locking Rear Differential ensures that it has all the hardware required to excel in the soft sand of the desert, the freezing tundra of the arctic and everywhere in between. Configurable Terrain Response debuts on new Defender, allowing experienced off-roaders to fine-tune individual vehicle settings to perfectly suit the conditions, while inexperienced drivers can let the system detect the most appropriate vehicle settings for the terrain, using the intelligent Auto function. The new body architecture provides ground clearance of 291mm and world-class off-road geometry, giving the 110 approach, break over and departure angles of 38, 28 and 40 degrees (off Road height) respectively. Its maximum wading depth of 900 mm is supported by a new Wade programme in the Terrain Response 2 system, which ensures drivers can ford deep water with complete confidence.

A choice of advanced petrol and cleaner diesel engines ensure the new Defender has the power, control and efficiency for any environment, while a Plug-in Hybrid Electric Vehicle (PHEV) powertrain will join the range next year providing the prospect of silent EV-only progress. At launch, the petrol line-up comprises a four-cylinder P300 and a powerful six-cylinder P400, featuring efficient Mild Hybrid Electric Vehicle technology. Alternatively, customers can choose from a pair of four-cylinder diesels – the D200 and powerful D240 – both of which deliver fuel economy of 7.6 l/100 km and CO2 emissions of 199 g/km (NEDC equivalent). 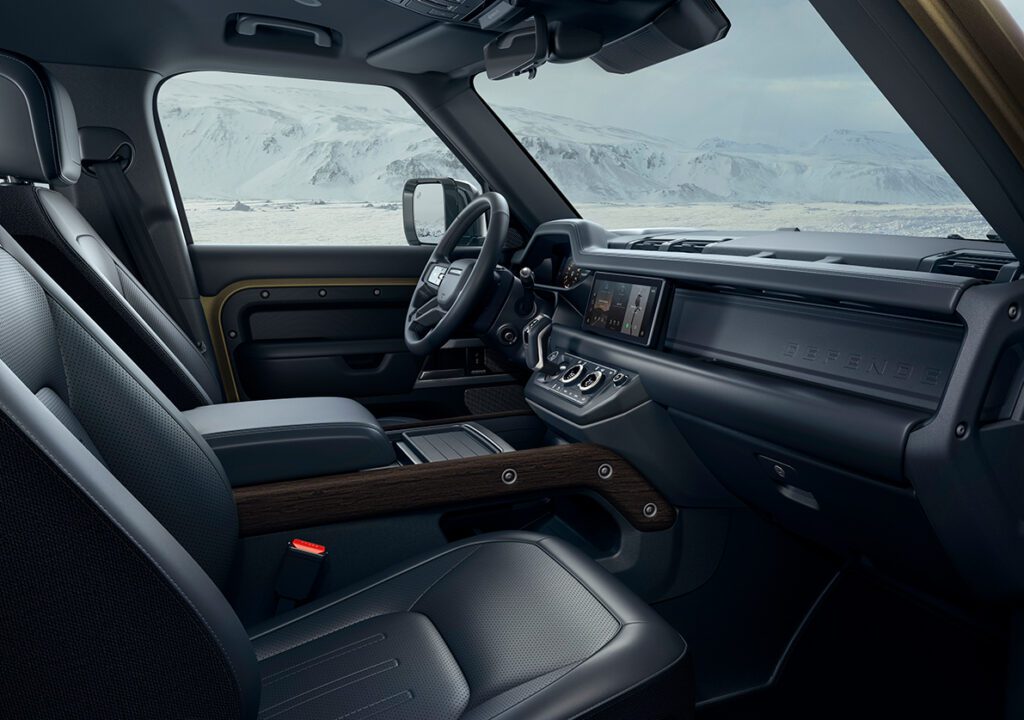 Across seven decades of pioneering innovation, Land Rovers have earned a unique place in the hearts of explorers, humanitarian agencies and adventurous families across the world. Proven in the harshest environments on earth, the new Defender maintains this bloodline. Alongside the peerless luxury and refinement of the Range Rover family and the highly capable and versatile Discovery SUVs, the new Defender completes the Land Rover dynasty. The 110 is just the start for this family of the most capable and durable 4x4s in the world. It will be swiftly followed by a compact, short wheelbase 90, before a pair of practical commercial models join the line-up in 2020.

Driven by a passion and respect for the original, the new Defender delivers transformational breadth of capability. Advanced all-terrain technologies redefine adventure for the 21st century, remaining true to the pioneering spirit that has been a Land Rover hallmark for 71 years.