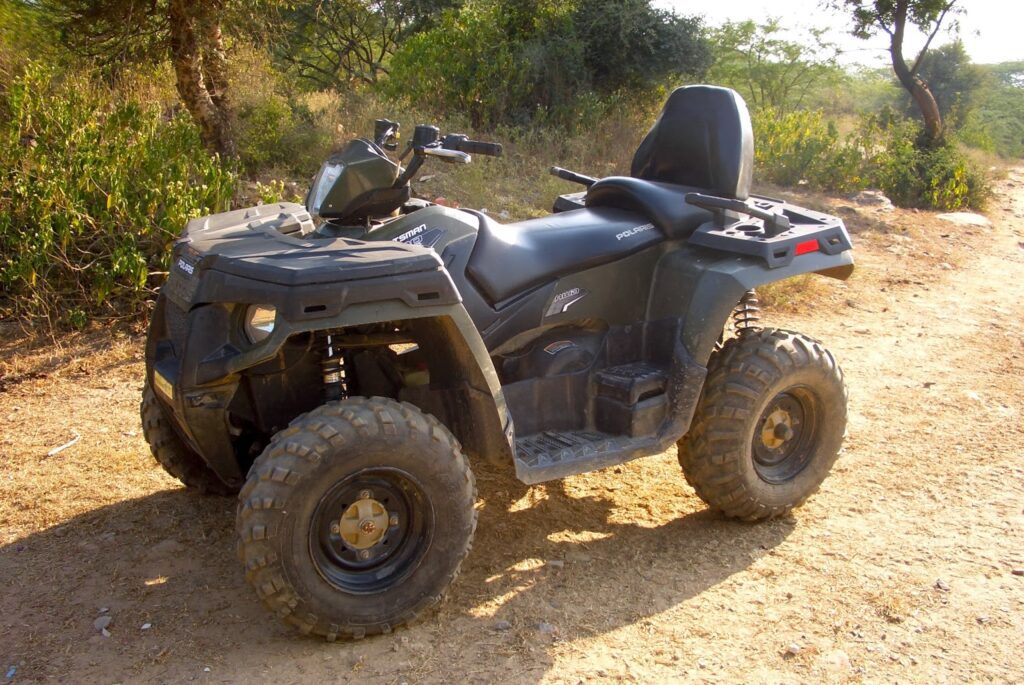 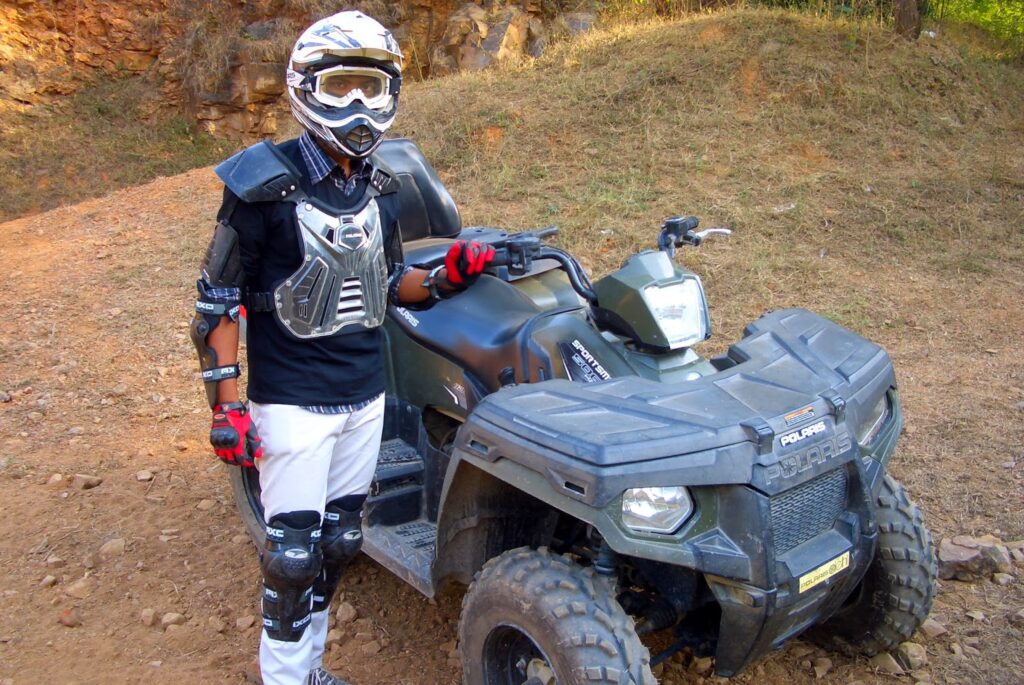 Raghav with the Sportsman Touring 500 H.O. 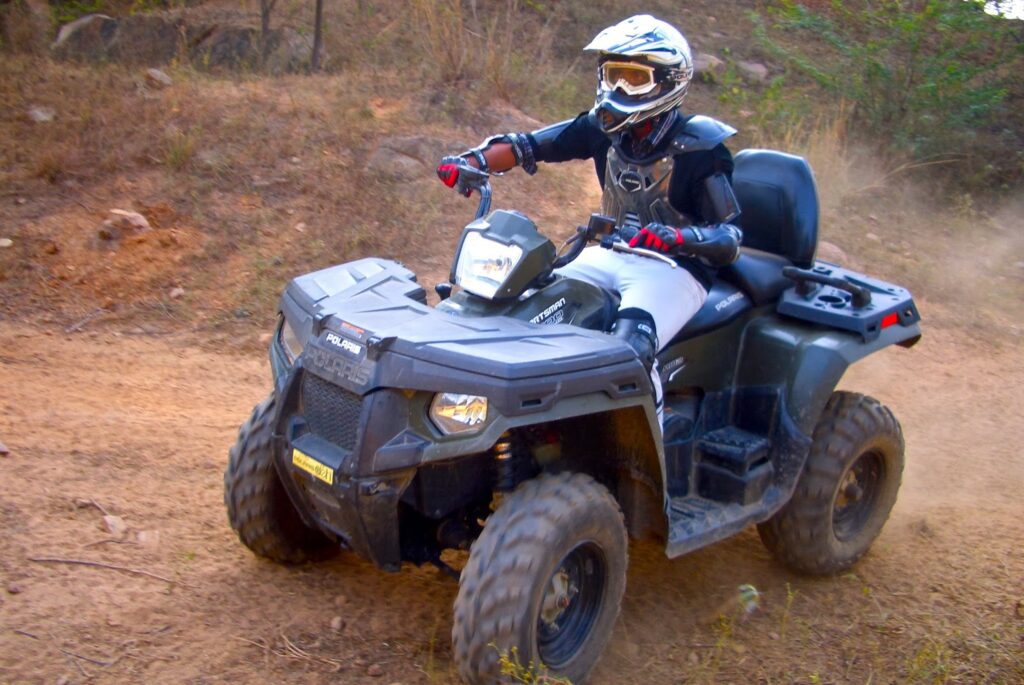 Raghav on the Sportsman Touring 500 H.O. 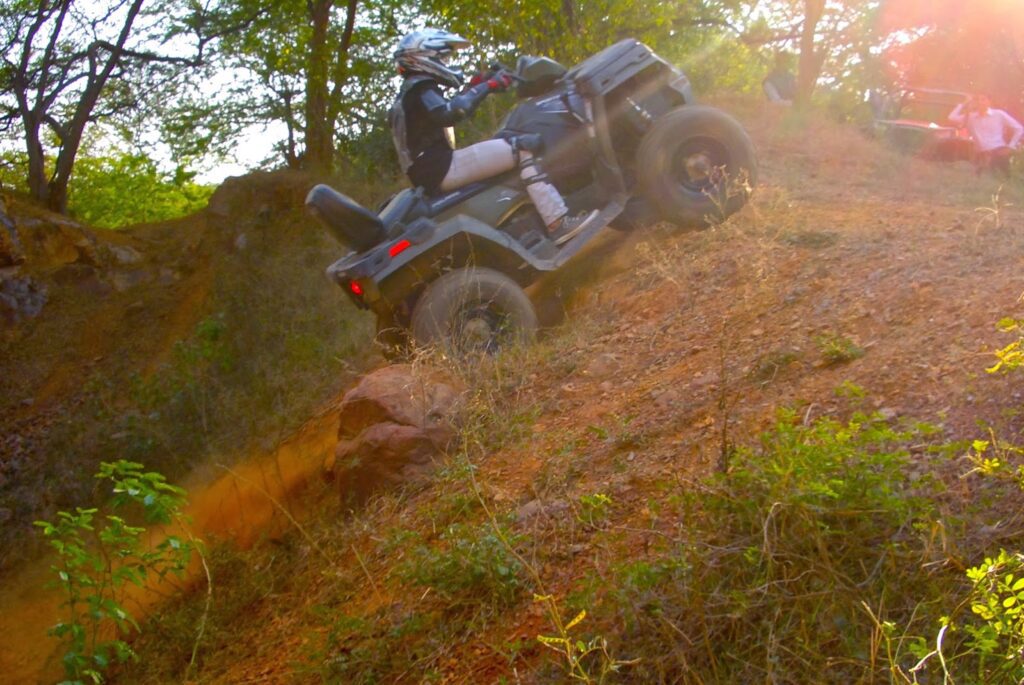 Engaging the 4WD on a steep incline

In recent years, ATVs and other form of recreational sports vehicles have gathered quite some momentum in India. As one of the largest emerging markets in the world for automobiles of all sorts, vehicles for adventure sports have not lagged behind. And at the centre of it all is one company – Polaris, a name that has stood out for all the right reasons.

Polaris is an American manufacturer of snowmobiles, ATVs and neighborhood vehicles and a recognized leader in the powersports industry, with an annual 2012 sales of $3.2 billion. The company is among the global sales leaders for both snowmobiles and off-road vehicles and their off-roaders and ATVs find applications across industries such as Defence & Police, Agriculture, Construction, Tourism, Forest Patrolling, Mining, Adventure, Coastal Patrolling, Beach Rescue, etc.

Almost all of their products are now available in India, and we recently had the chance to drive two of them in Delhi at a natural rugged track laid out in a forest area in the outskirts of the city. The company officials stated that in India so far, there has been a positive response from the recreational sport & tourism sector, but were hopeful that the utility aspect of the vehicles would be recognized as well. A case in point being a recent institutional order from the Gujrat Police for border patrolling.

The products we reviewed were the two off road vehicles – the Sportsman Touring 500 H.O. and the RZR S800, which is one of the most powerful vehicles in the Polaris line up. Both had their pros and cons, and were exciting to drive for completely different reasons.

The Sportsman Touring 500 H.O. is powered by a 4-stroke 500cc engine, an automatic transmission, and on demand 4WD. This is the best selling 4X4 ATV of all time and weighs a mere 316 kg, which provides a great power to weight ratio. Being as light as it is, the Sportsman can get a bit difficult to handle. It has a 11.25” boulder-avoiding ground clearance which gives a high stance & driving position with a clear line of sight; but it also takes a bit of getting used to in order to remain in control, specially while navigating sudden sharp turns. The unit we were given had a slightly stiff steering, and the brakes were not very responsive, which made for a rather adventurous but overall decent ride. The 4WD was quick and effective, providing ample traction in a 65 degree steep incline where we put it to test. The Sportsman is for the adventurous and provides a lot of thrill. With its 1,225 lb. towing capacity it most certainly lives up to its hard working reputation.

The  Sportsman Touring 500 H.O. is priced at Rs.7,91,596 (ex-showroom Delhi) and the high cost is attributed to import duties on completely built up vehicles. 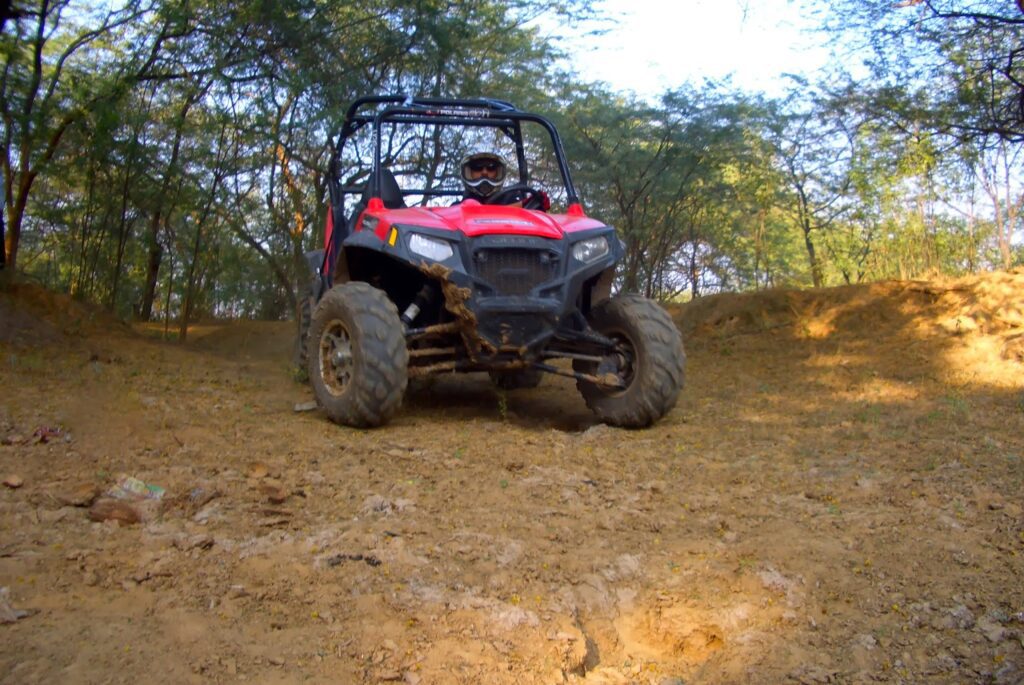 The top of the line Polaris RZR S800 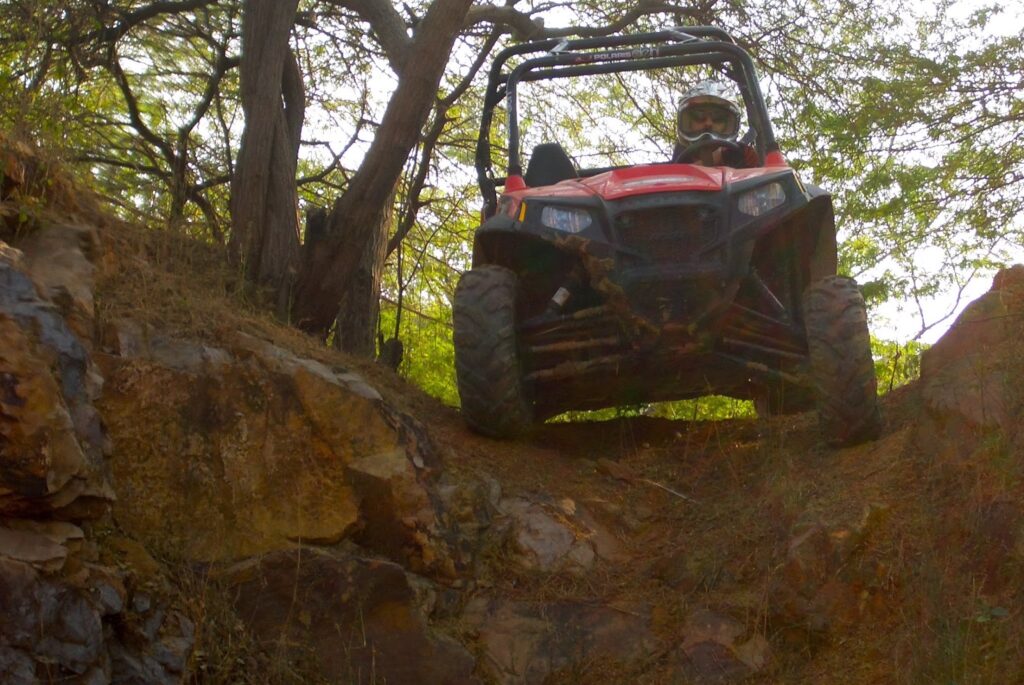 Negotiating a steep 75 degree decline in the RZR S800 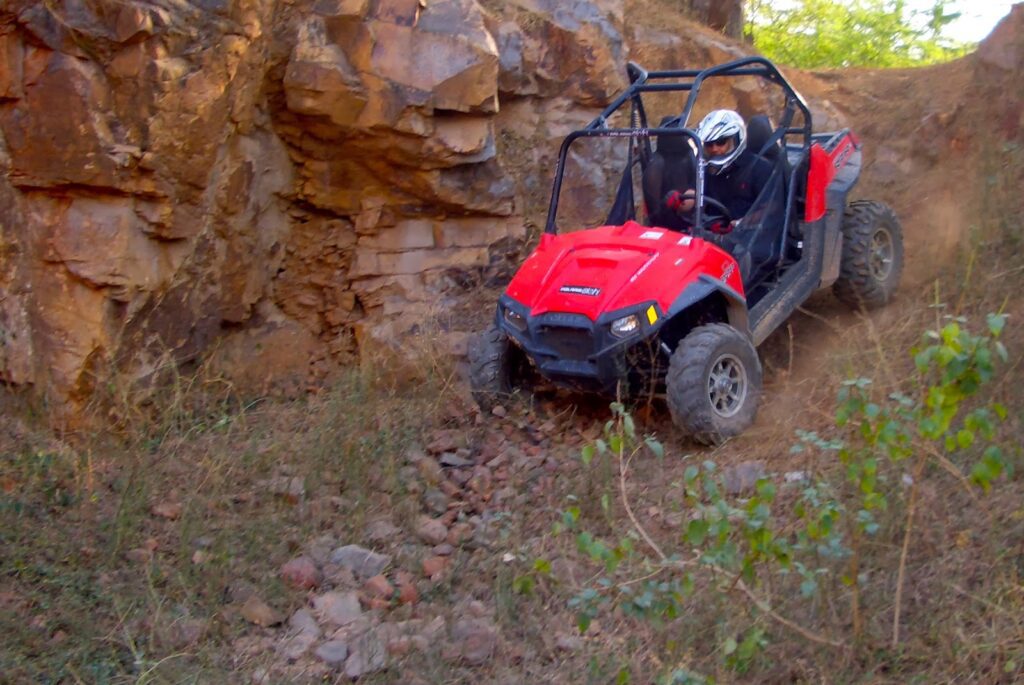 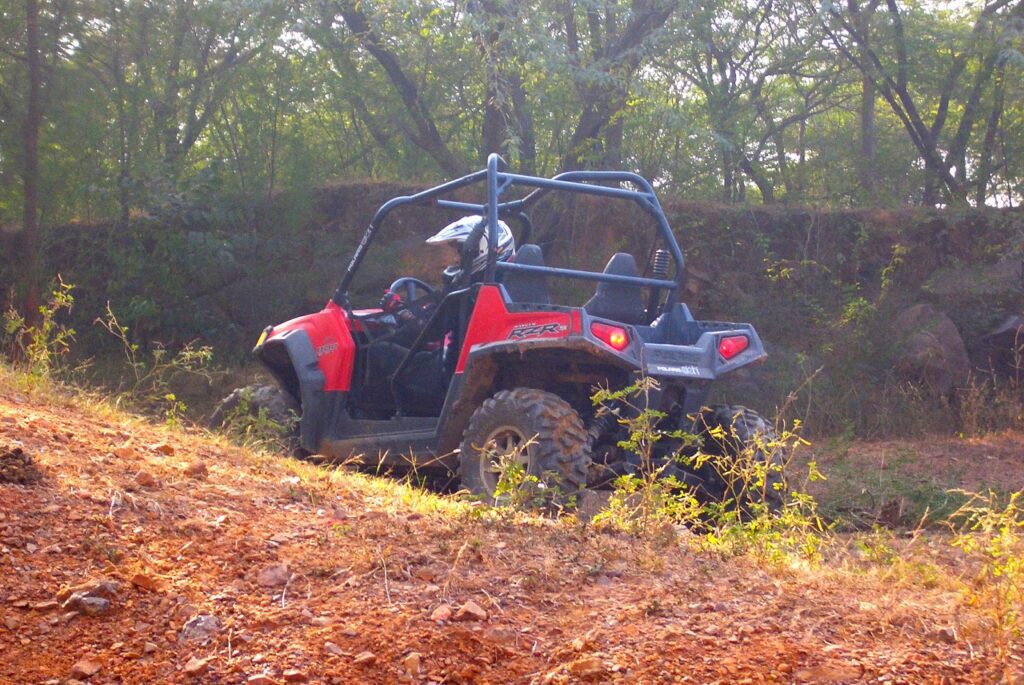 The rear of the Polaris RZR S800

The RZR S800 is a different story. With a 760cc high output engine it is more powerful, agile and offers true sport acceleration of 0 to 35 mph / 56.3 kph in just 3.8 secs. It weighs just 464 kg, which is pretty light, considering it is much bigger in size than the Sportsman and comfortably seats two. It has an obstacle-clearing 12.5″ ground clearance, an automatic transmission and on demand 4WD. Like the Sportsman, the 4WD worked amazingly, and with the flick of a switch, provided great grip even on the steepest of slopes. We did a steep 75 degrees downhill and a 65 degree incline, but never once felt out of control. What we liked about the RZR was the control one had over the vehicle and it was largely due to the low centre of gravity and wider stance. The steering was direct and precise, the brakes were responsive and with its Roll-Over Protective Structure, it felt much more in control and secure.

Both vehicles are immense fun to ride. While the RZR is more controllable and engaging, the Sportsman is definitely more entertaining and thrilling. But out of the two, my pick would be the RZR S800. 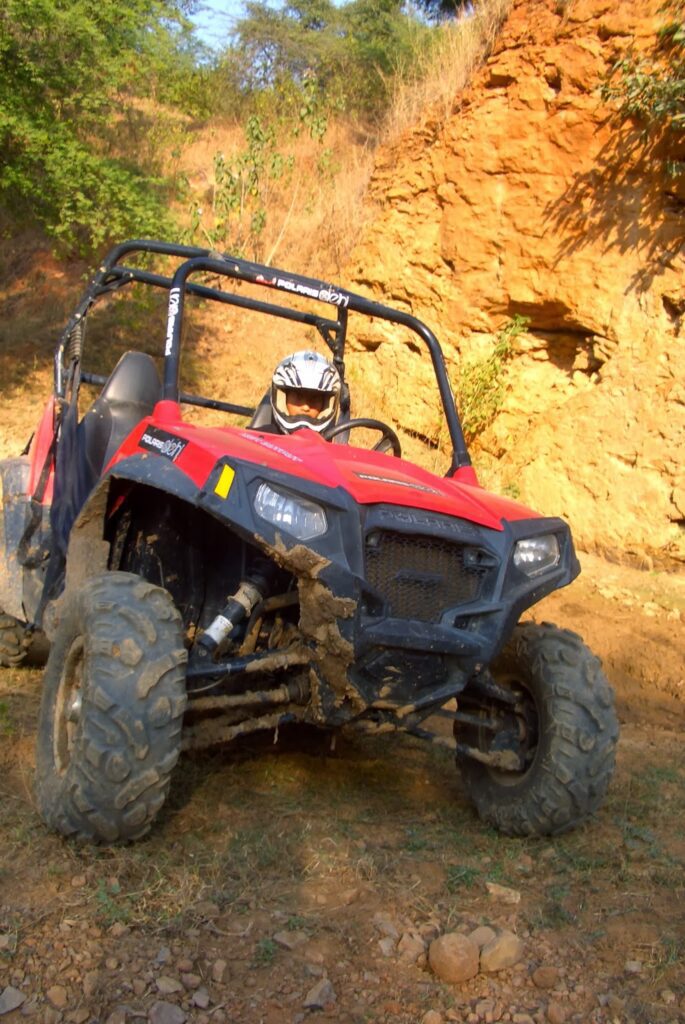