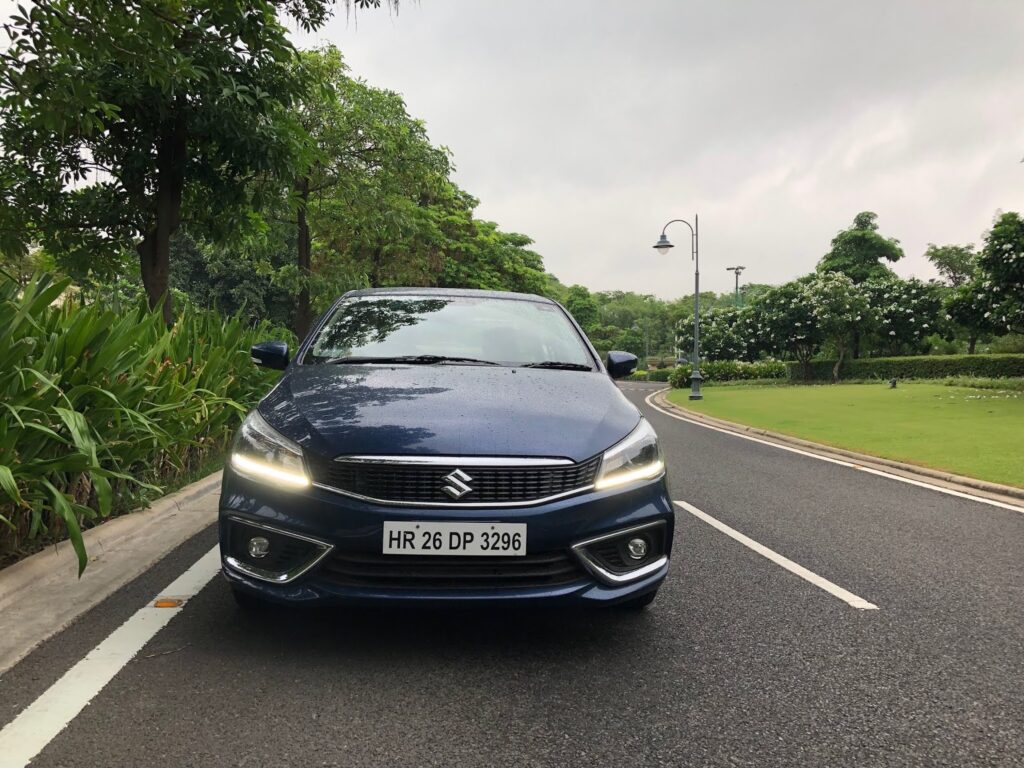 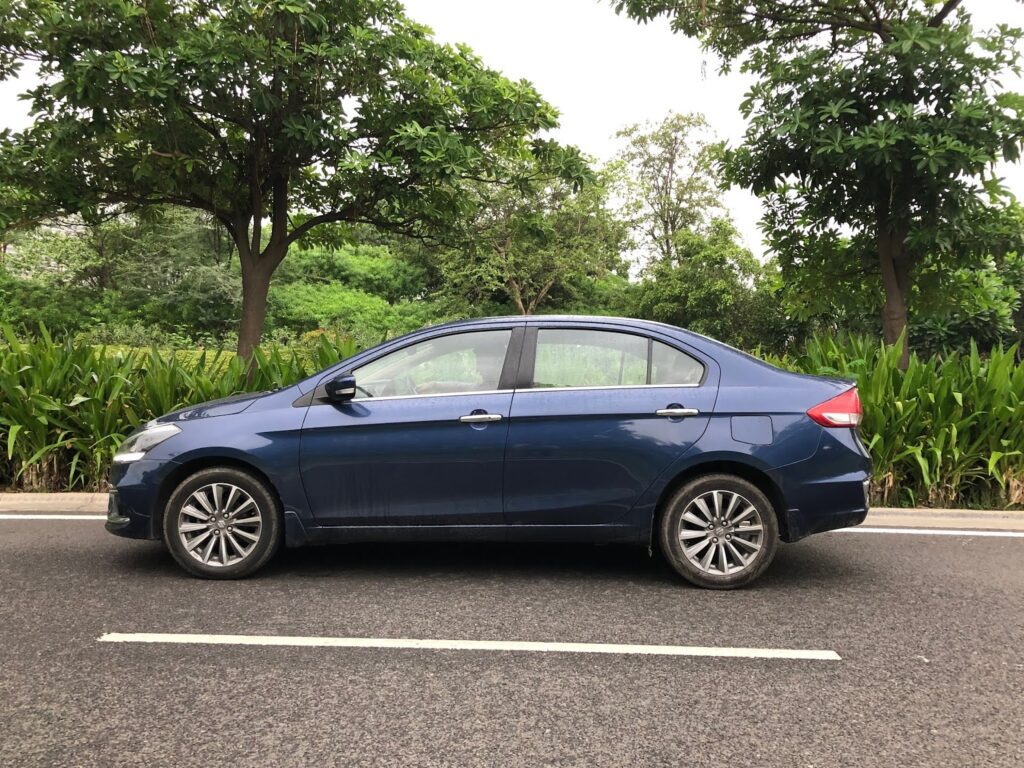 The Ciaz has been a rather significant  success story for Maruti Suzuki and its sales numbers are a testament to its position in the mid size sedan segment. It has also played a significant role in establishing the more premium Nexa retail experience for the car maker, attracting a new set of younger urban audience. For the first time, thanks to the Ciaz, Maruti has been able to go up against, and even beat the likes of the Hyundai Verna and Honda City. When launched 5 years ago, the Ciaz was a strong, but tad boring alternative to the established segment leaders. The recent facelift has given it a fresh look and feel, with some changes being made under the hood as well. Having driven the diesel variant of the new Ciaz earlier, we were thoroughly impressed by its ability to be a fantastic daily commuter. But does the petrol variant, with its new “smart-hybrid” system have what it takes to match up to its diesel brother? We spent a few weeks driving around the 1.5L petrol Ciaz in the Alpha trim, to find out just how much has changed.

The face-lifted Ciaz isn’t a drastic change from its predecessor, but it gets the job done. LED headlamps and DRLs combined with a sleeker front end gives the car added presence. There is a generous amount of chrome as well, something which appeals to the mass of Indian car buyers. Things haven’t changed much down the sides, although the back of the Ciaz gets a new LED tail lamp design with some more chrome thrown in. Maruti has always played it safe with its design language, and the face-lifted Ciaz is no exception. However, the subtle changes do make it a bit more desirable than before, and the fact that Ciaz remains the largest car in its segment, further adds to its appeal. 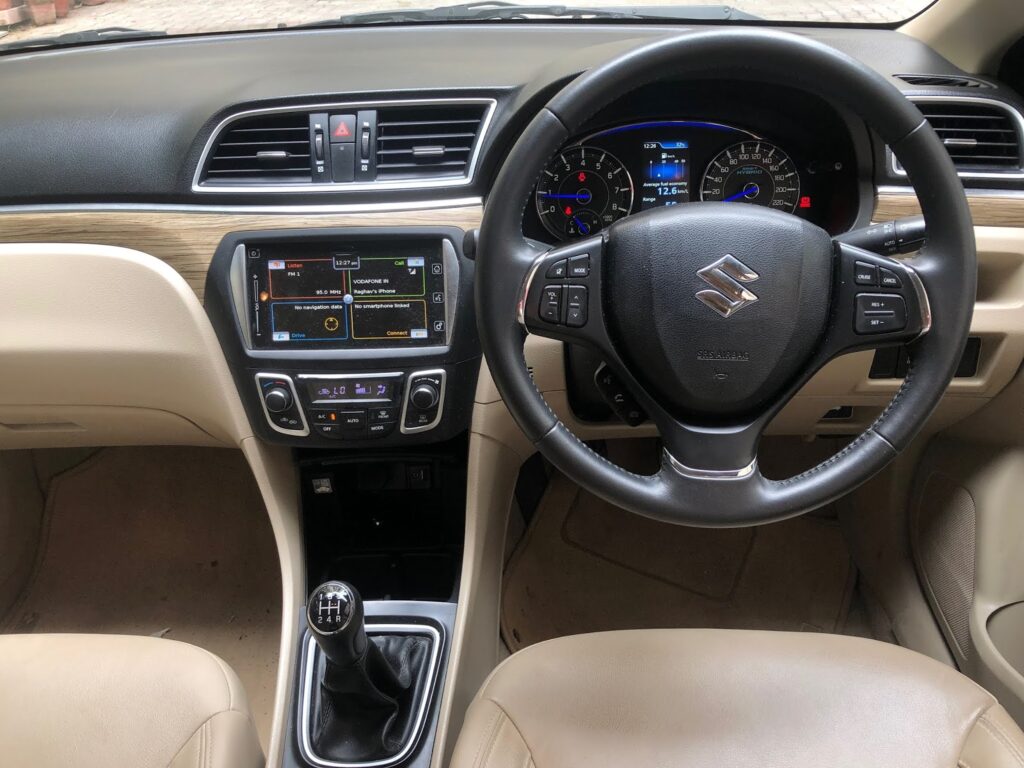 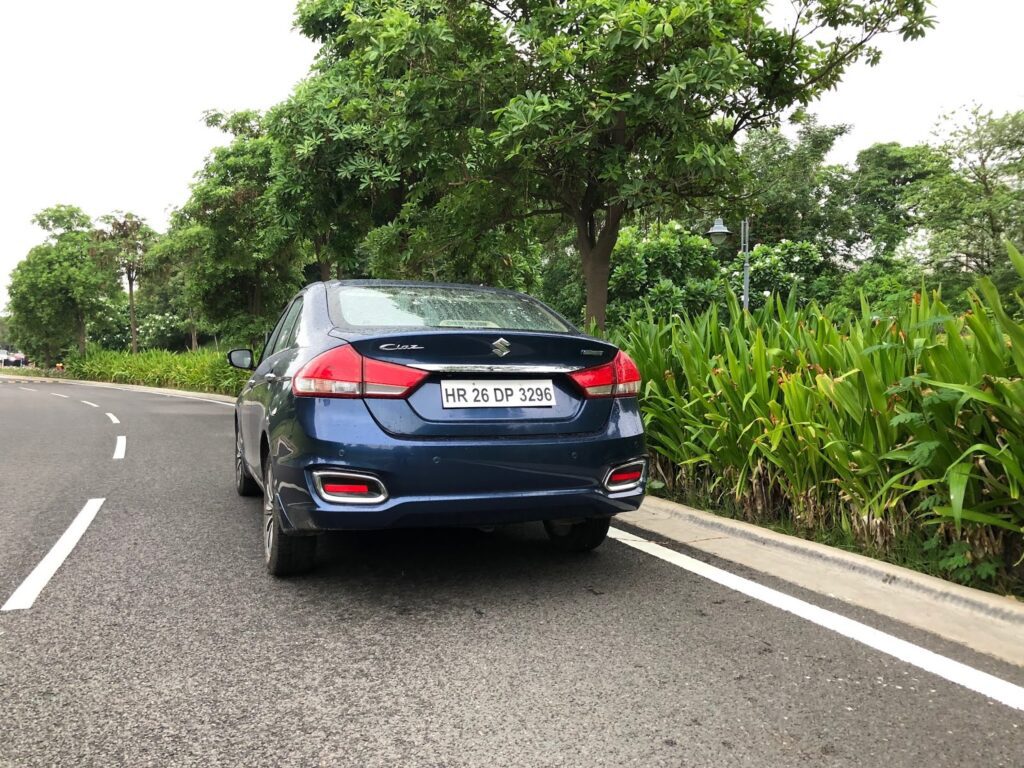 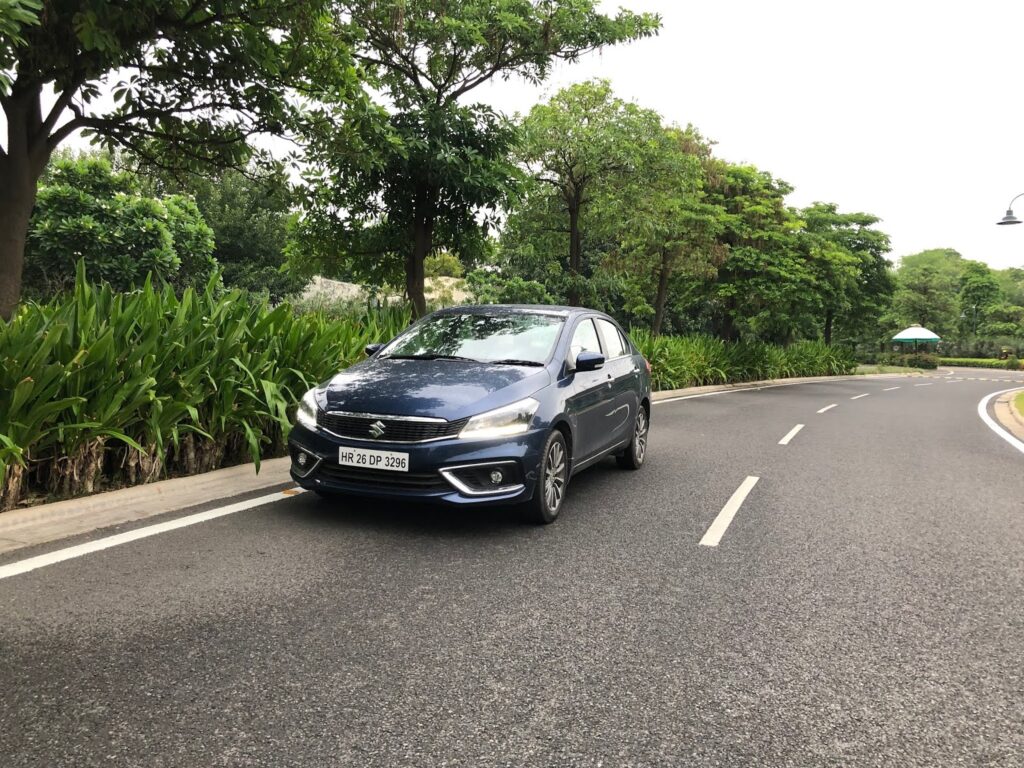 The interior of the Ciaz remains more or less the same. While it’s certainly not the most sophisticated in the segment, it is about function over form. The simple straight line design carves out a lot of additional cabin space that enhances passenger comfort, both in the front & rear. Subtle changes inside include the faux wood finish, and the inclusion of adjustable head rests for rear passengers. The Ciaz continues to be the most spacious car in its segment, with the rear legroom being astonishingly good. While build quality isn’t the best, the Ciaz makes up for it in terms of passenger comfort, space and cabin storage. It is also decently equipped, offering most of the creature comforts one would require. The infotainment display comes with Android Auto and Apple CarPlay, and the Ciaz has automatic climate control, cruise control, rear seat AC vents, and rear parking sensors with reversing camera. Overall, it gets the job done as far as passenger comfort is concerned, and the inoffensive interior design does not polarise opinions. So far so good.

The real changes to the Ciaz can be found under the hood, as the petrol variant gets a new 1.5L K15 petrol motor that makes 105 PS of power and 138 Nm of torque. While these figures are more than the previous generation petrol motor in the old Ciaz, don’t expect a significant performance upgrade, as the Ciaz still offers a rather vanilla drive experience. Our test car came equipped with the quick shifting 5-speed manual transmission, which is definitely a better choice than the sluggish automatic. The engine offers enough low end thrust but isn’t too responsive to hard revving. Those sudden overtakes need a quick downshift and the lack of reserve power during hard acceleration does take away a bit of joy. The driving experience is far from wild, and the Ciaz doesn’t quite respond to any sort of enthusiasm behind the wheel. It remains well behaved and civilised all the way, refusing to give up its good boy image even when no one is looking. The Ciaz is how you would expect it to be. Sans surprises. It doesn’t like to be pushed too hard. Some may find it lack lustre, but this is a car that encourages disciplined urban driving. There is a speed alert system as well, that lets out an audible warning to alert the driver in case of over speeding. The light steering doesn’t provide much feedback through the corners, but is a blessing while driving around town.

The overall drive experience is unhurried and relaxed. The power delivery from the petrol engine is smooth and gradual, and that makes it good to cruise along. The ride is easily the most comfortable in the segment and as far as passenger comfort goes, it excels. It makes for a great city commute, and a reasonably decent highway cruiser, although some extra power would have added a bit of zing and made it more fun to drive. While the diesel Ciaz has made use of Maruti’s SHVS hybrid system since the first generation, this is the first time that the petrol variant has been fitted with this technology. The SHVS system adds a lithium-ion battery to the Ciaz, which works in tandem with the auto start-stop function. The system also features break energy regeneration, which charges the batteries as you press the brakes. The hybrid system is also supposed to assist performance thanks to its torque assist feature, which aids acceleration by using the stored up battery power. The impact isn’t the most significant in the real sense, unless one is really looking hard to feel the difference.

The Ciaz also gets a sleek 4.2-inch TFT colour MID, which displays stats and graphics about the hybrid system. The main focus of the SHVS however, is fuel efficiency, and Maruti claims the Ciaz has an efficiency rating of 21.56 km/l. We however managed to clock 12.8 km/l during our time with the car, driving over 900 kms around the city.

All in all, the face-lifted Ciaz petrol is a sensible buy at its price, which starts at INR 8.19 lacs for the base petrol and goes up to INR 10.98 lacs for the top of the line variant. While it isn’t the most evocative or desirable sedan out there, it certainly is a very practical buy at that price point. With a comfortable and reasonably well equipped cabin and hassle-free driving experience, the Ciaz is extremely well suited as an urban mid-size sedan, with a price that undercuts the competition considerably.

If you are seeking a value sedan within the INR 10.0 lac budget that ticks all the boxes, the Ciaz petrol might just be the car to go for. It is driven by logic, and is sensible, smart and stylish. And there is nothing to beat the assurance of India’s largest car maker when it comes to ownership cost, maintenance and service.