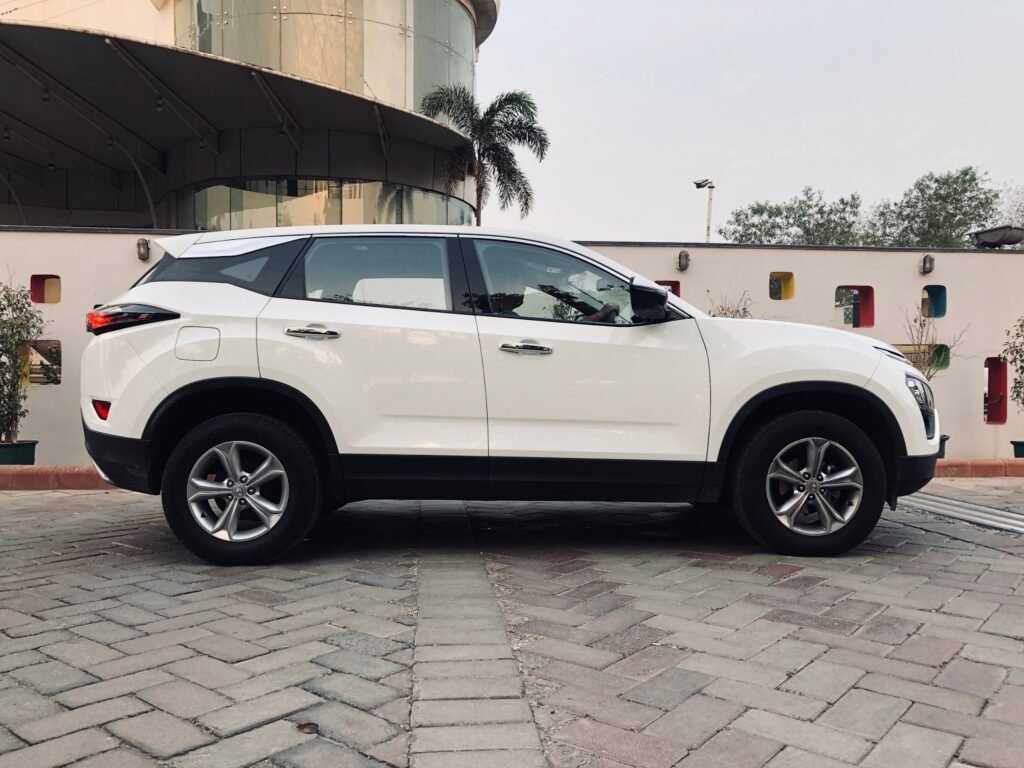 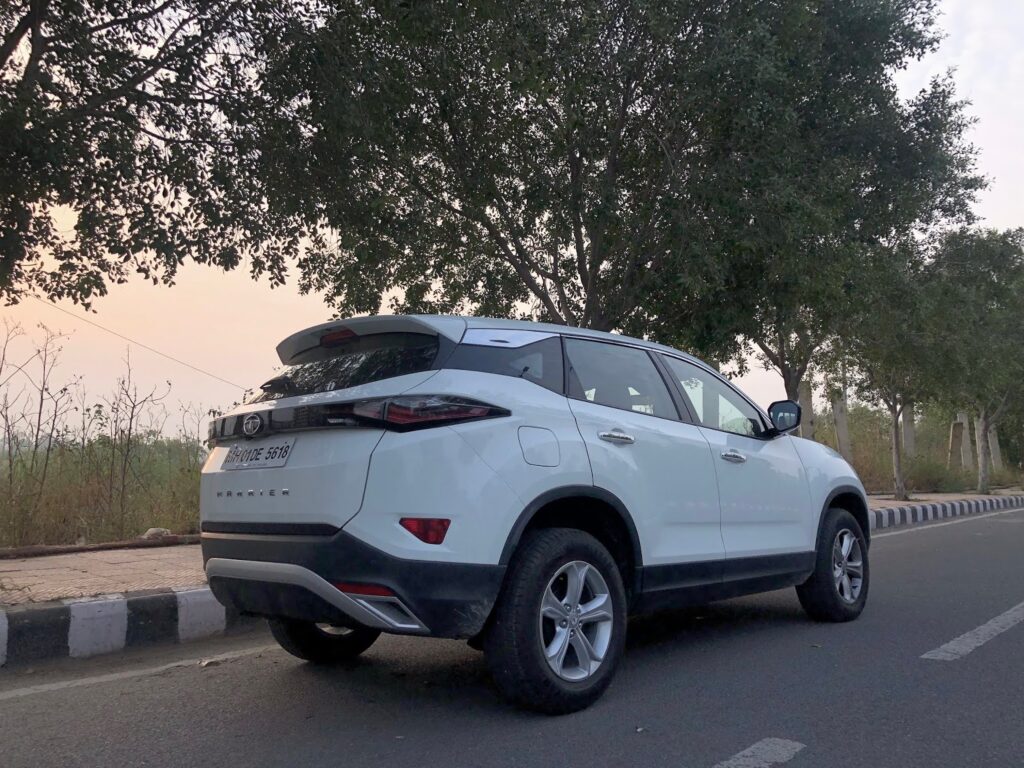 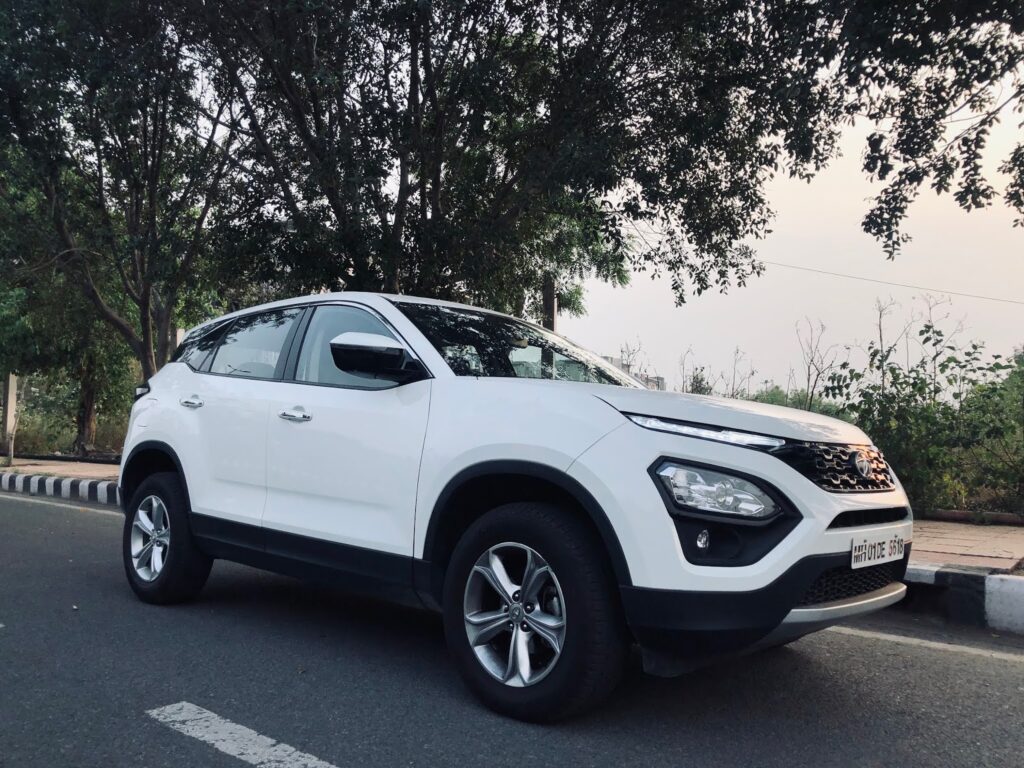 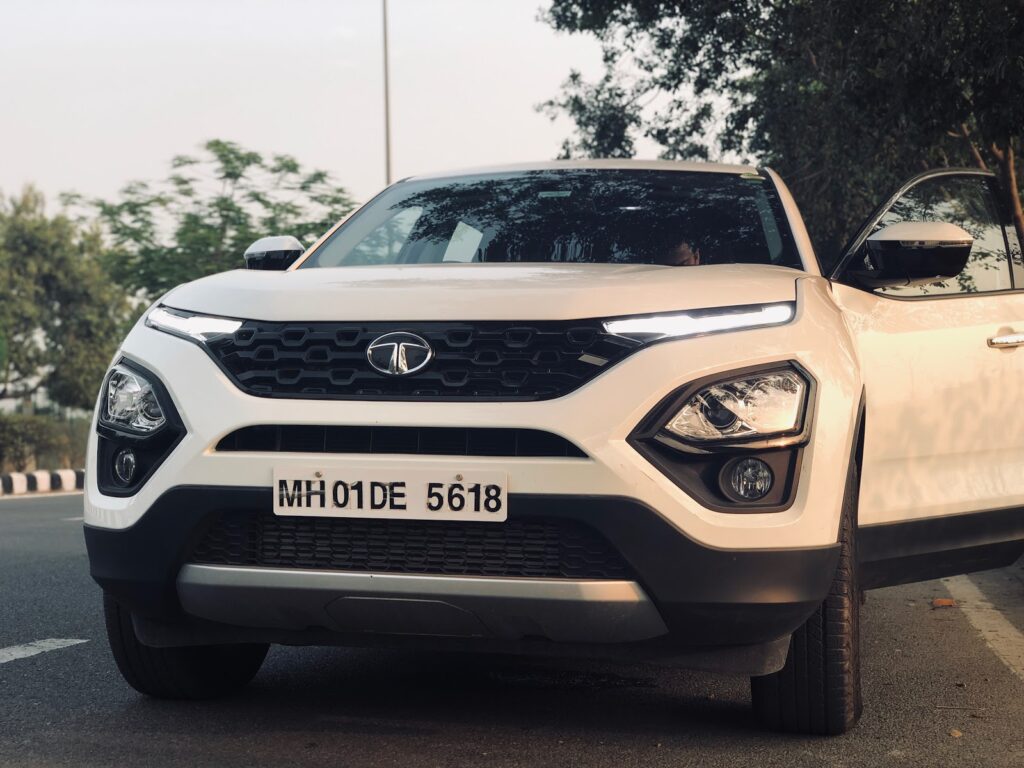 Tata Motors has long been a marquee brand in the Indian automotive industry, creating products such as the Safari and Sumo which resonated quite well with Indian customers for decades. While their rugged offerings have appealed to a generation of explorers and seekers, the lack of refinement and dearth of innovation has held them back from making inroads into the premium market. All of this seemingly changed in 2008, with the company’s acquisition of Jaguar Land Rover. The marriage heralded an opportunity for Tata Motors to redefine itself, and it took a few years for things to take shape in that direction. The silver lining was the H5X concept, revealed at the 2018 Auto Expo in India. Out of which Tata’s latest luxury offering the Harrier was born. It’s an SUV that ticks all the right boxes, with a fresh and innovative design that incorporates JLR’s strong underpinnings.

Earlier this year, the Harrier launched with much fanfare and got Indian auto enthusiasts excited like never before. And rightly so. After all, it was Tata Motor’s first foray into the premium market and another major attempt to redefine its image. Since launch, the Harrier has had a blockbuster opening in an otherwise gloomy market scenario and sold over 10,000 units in less than six months. It has managed to hold on its own merit and sway customers away from existing offerings in the segment. But how good is the Harrier beyond the design and Land Rover pedigree? We spent a fortnight with the range topping Tats Harrier XZ 2.0L diesel to find out what it does well, and what it could do better.

It was refreshing to review a Harrier in a colour other than Calisto Copper, and thankfully our test vehicle came in Orcus White. So full marks for that. It was quite a relief after the copper overdose since launch. Post launch, many wondered if the Harrier came in any other colour at all. But yes, there are four variants – XE, XM, XT and XZ, and five colour options – Orcus White, Ariel Silver, Telesto Grey Calisto Copper and Thermisto Gold. With dual-tone options in Calisto Copper and Orcus White in the top-spec XZ.

One look at the Harrier is enough to tell you that design is an area where it definitely succeeds. It is striking and has a tremendous road presence. Say what you may, but this one undoubtedly gets a lot of attention. The front fascia is dominated by the hexagonal grille slats and the super-slim LED day time running lights. The design takes a lot of cues from the H5X concept, although we are not the biggest fans of the headlamp design that made its way into the production vehicle. Also, the shiny black plastic grille makes a decent attempt at faking menace. Move along the sides and you’ll be greeted with a strong stance, a sharp character line running from the front door to the tail lamps, and chunky 5-spoke 17″ wheels. The Harrier has a commanding presence thanks to its bulging design, which is reminiscent of the Discovery Sport. The interconnected tail lamps are a nice touch as well, and the dual exhaust-like design elements on the rear bumper along with the subtle rear spoiler add to its sportiness. The Harrier grabs attention when viewed from the front or the back, and the overall design is risky to say the least. Tata Motor’s Impact 2.0 design language has been far from staid or safe so far, and it’s a risk that has paid off well. For the Harrier is one of the most eye catching SUV in the segment, and definitely the best looking car to come out of the Tata Motors stable yet. 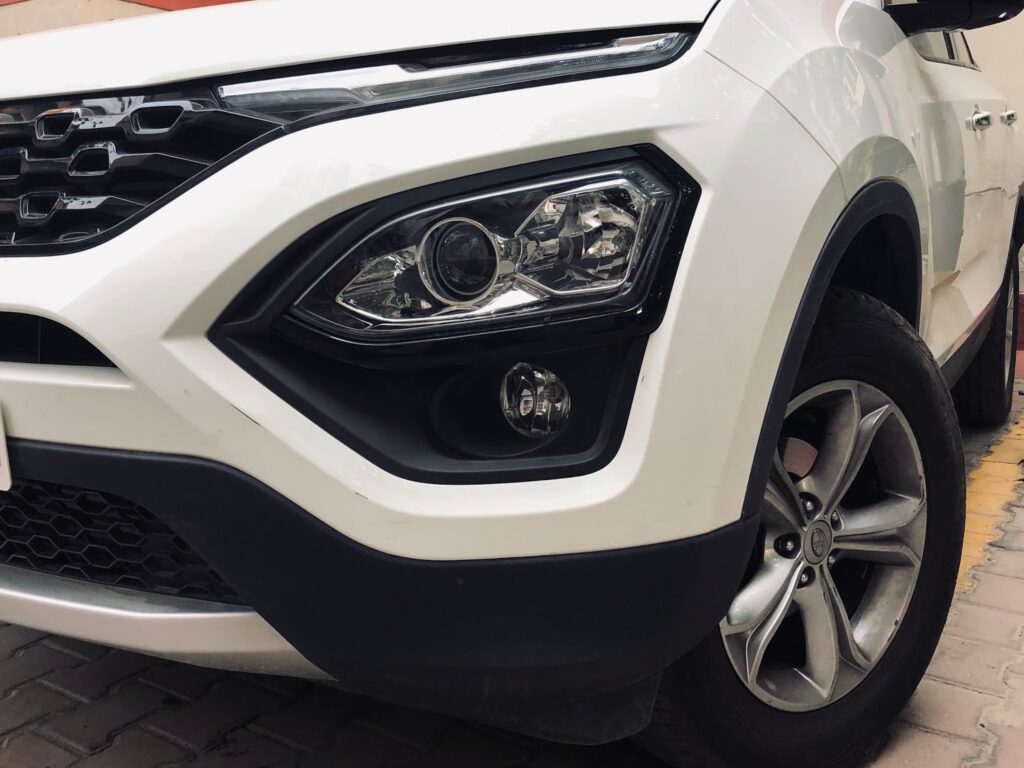 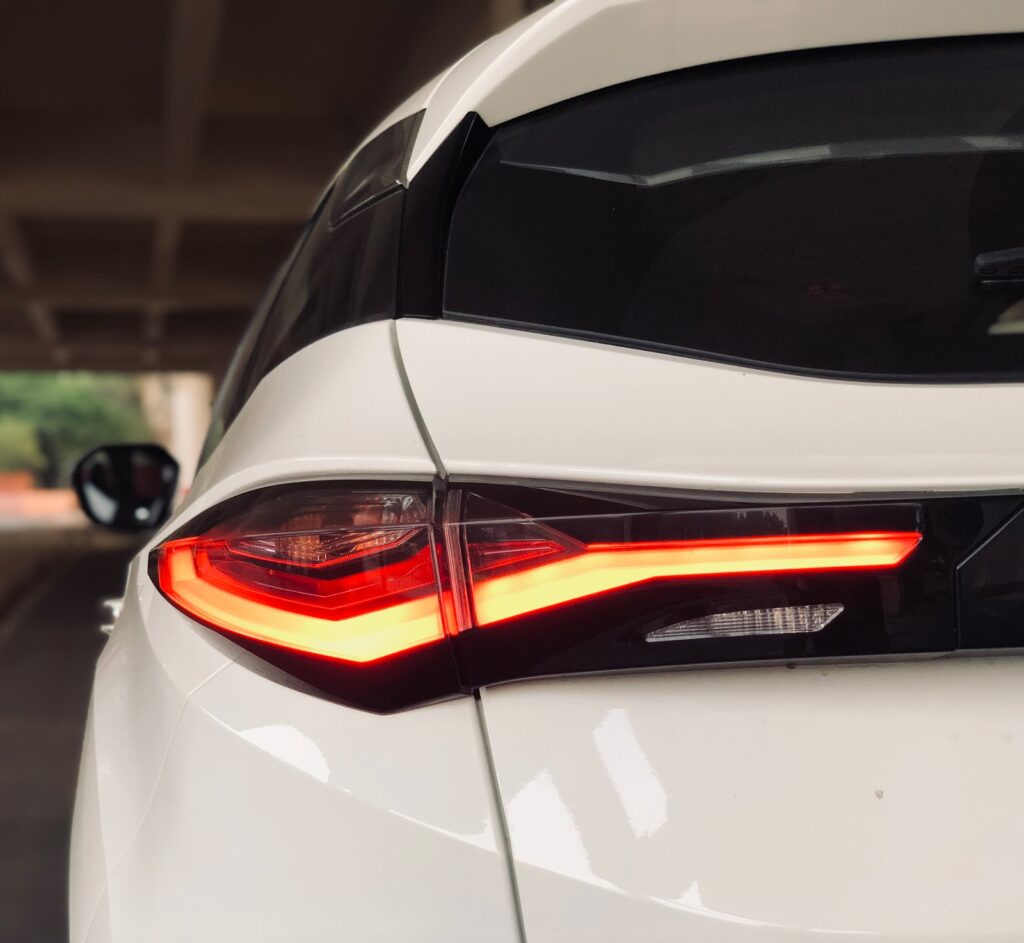 While the quirky design language does not make its way into the interior, the cabin is still a well designed space which borrows bits from the existing lineup. The simple design of the dashboard combines clean straight lines with brushed silver accents, and the brown and black theme of the cabin is a refreshing departure from the boring beige. The dash is dominated by the large 8.8″ infotainment display, which incorporates Apple CarPlay and Android Auto. While the system is easy to use and intuitive, we would have liked to see slimmer bezels on the side of the screen. Lower models have to make do with a smaller 7″ display, but retain the same features as the top of the line XZ variant. The Harrier offers an extensive feature list, including fully automatic climate control, automatic headlamps and wipers, and an 8-way adjustable driver’s seat. Other features include a 7″ digital driver’s display, and a bass-heavy JBL sound system in the top spec variant. The car also comes with reverse parking sensors and a parking camera, although the quality of the rear camera is rather abysmal. The lack of a sunroof in the top end variant is a significant omission from the feature list, and something that would have added to the premium feel of the Harrier. While the soft touch plastic on the top of the dashboard is a step in the right direction, the Harrier starts to show signs of shoddy build quality as you explore the cabin. In our test car, the handle to adjust the driver’s seat completely came off, and irregular panel gaps and sharp edges along the window sill were all let downs in an otherwise well appointed and stylish cabin. In terms of safety, the XZ variant of the Harrier gets six airbags, ESP, hill descent control, hill hold assist, roll over mitigation and traction control.

Space and comfort is where the Harrier scores big points, and the wide cabin can easily seat five people in comfort. Both the front and back seats were comfortable with ample bolstering, and rear seat legroom and headroom was more than enough as well. While the cabin is extremely spacious and comfortable, the driver’s seat seemed to be the least comfortable place to be. There are some annoying ergonomic issues, such as the narrow foot space for the dead pedal, and the driver’s left knee brushing against the centre console curvature. While the door pockets provided enough storage, the central cup holders were limited by the humungous and unnecessary handbrake arching over it. The placement of the USB port is another big issue, and why the Harrier chose to position such a regularly used feature so obscurely is unfathomable. The small mobile tray does not have enough space to hold a phone while charging. No one probably gave it much thought that these little things intuitively need to be in order, instead of becoming pain points for discussion.

While the driver does get a commanding view of the road from a reasonably high seating position, the thick A-pillar proves to be a blindspot and the oversized ORVMs are a further hindrance to visibility while driving. Rear visibility is also hampered due to the curved notch that holds the rear windscreen wiper. So one tends to remain a bit stressed while keeping an eye around. 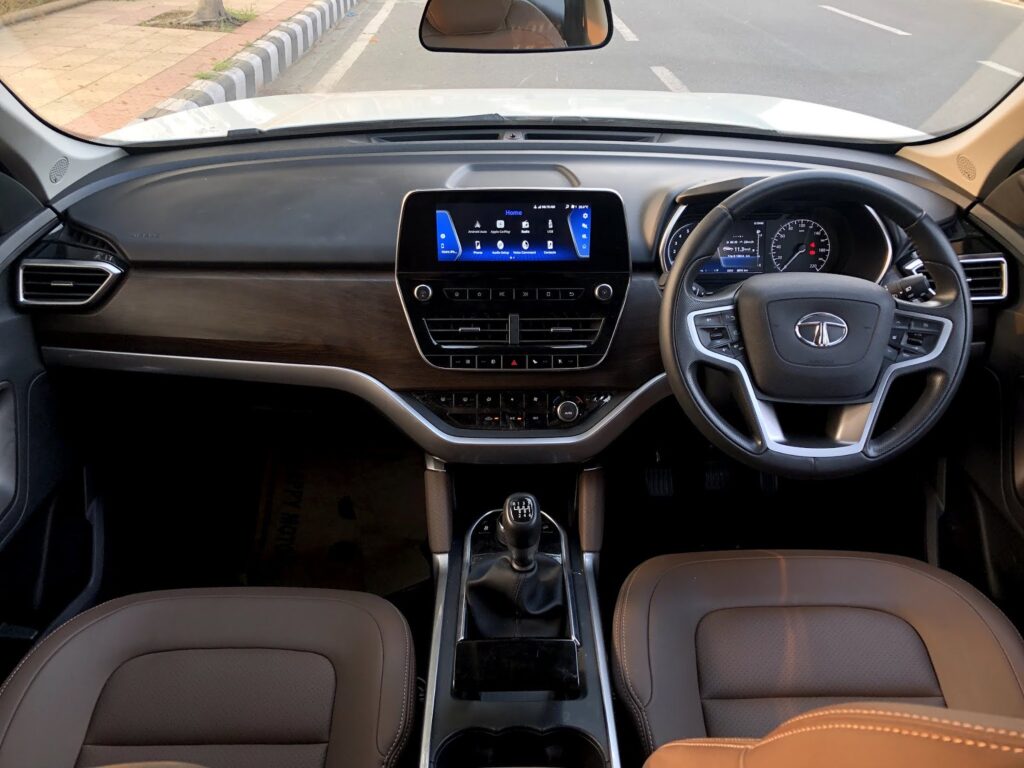 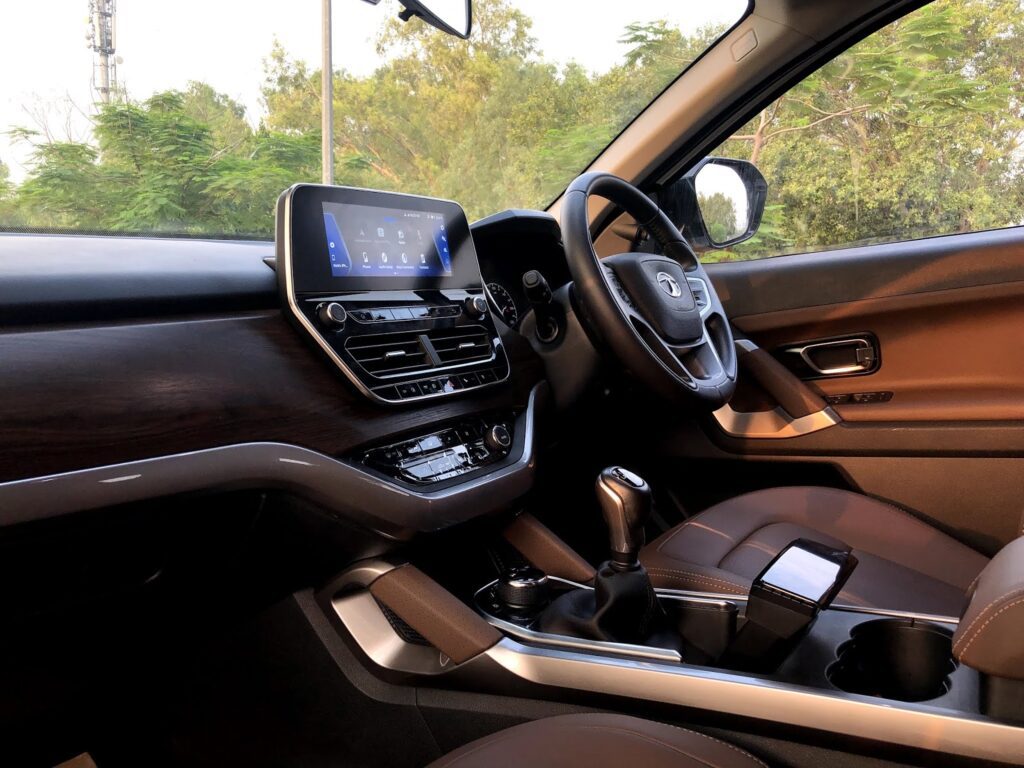 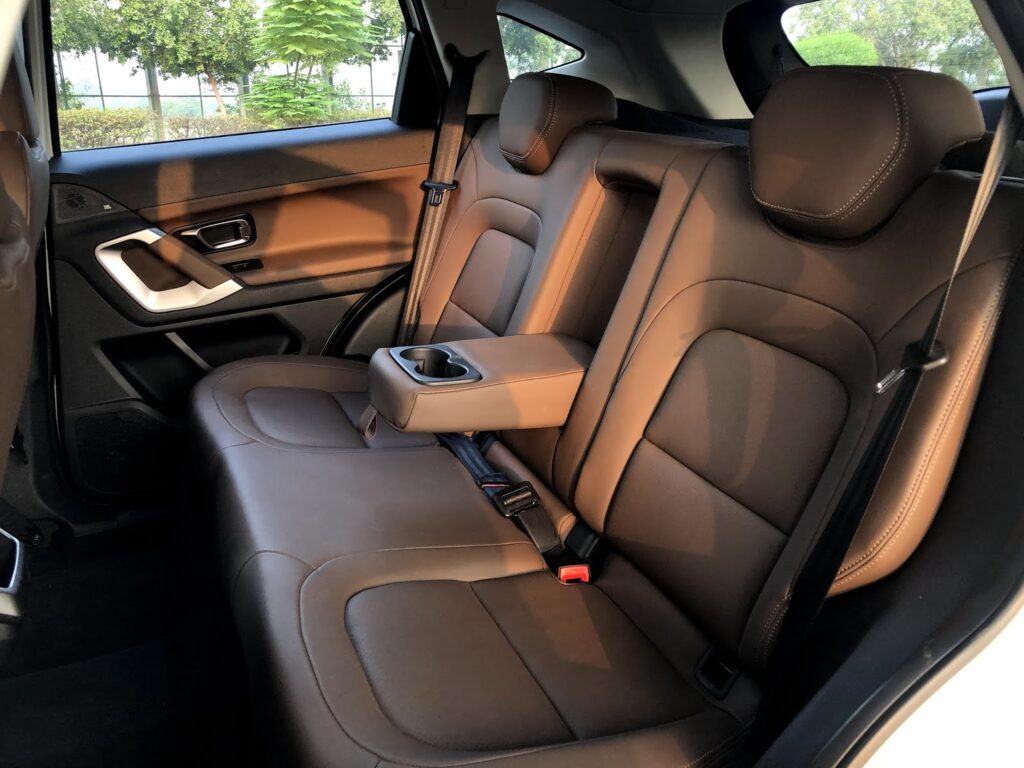 Big on space and comfort

Since the Harrier is based on Land Rover’s D8 Monocoque platform, we were looking forward to experience how it felt on the road over a longer driving range. Though it comes with the same Fiat engine that is used in the Jeep Compass, the power has been significantly limited. While the 2.0L turbocharged diesel motor produces 173 PS in the Jeep Compass, the Harrier has to make do with 140 PS of power and 350 Nm of torque. It is a bit too rough for our liking, with a lot of noise, vibration and harshness creeping into the cabin as well. While the Harrier doesn’t feel low on power, it does struggle in the low range and under hard acceleration. The 6-speed manual transmission is smooth in power delivery, but an automatic option would be in everyone’s wish list. As a city cruiser, the Harrier has more than enough grunt, and performed fairly well out on the highway as well. The SUV comes with three driving modes, Eco, City and Sport. While the Eco mode stifles the performance considerably, Sport mode does little to effectively enhance the performance. The City mode is where we left it most of the time, as the engagement level wasn’t too high and it was adequately balanced for everyday commute. While the steering has a decent amount of weight and feel during high speeds, the heavy steering is a burden in low speed city driving. Moreover, the frequent downshifts and the large amount of travel in the clutch pedal can make it a tiring drive. The Harrier also has the largest turning radius, and the overall experience can drain you out a bit behind the wheel.

While in theory the Land Rover platform should help in improving driving stability, the effects aren’t quite visible in the real sense. The Harrier has significant body roll under hard cornering, and the tall height doesn’t provide the most stable experience around bends. Even in a straight line, the Harrier seems to waft around at speeds above 100 km/h. While stability has been improved over Tata’s earlier offerings such as the Hexa, the Harrier still needs some work to make it feel like a truly premium offering. However, what the Land Rover platform does help with is ride quality. The Harrier does manage to tackle most rough surfaces with reasonable ease. It only comes in a 2WD option for now, and a 4WD option doesn’t seem to be on the horizon anytime soon. However, the Harrier does come with a Terrain Response system which uses the ESP to alter the amount of traction in the front wheels.

Fuel efficiency isn’t the strongest point for the Harrier either. While we clocked 14.1 km/l cruising through the expressway over a range of 100 kms, we clocked a significantly low 9.4 km/l while driving around the city. During the time that we had the vehicle, we averaged out at 12.1 km/l over a range of about 700 kms. 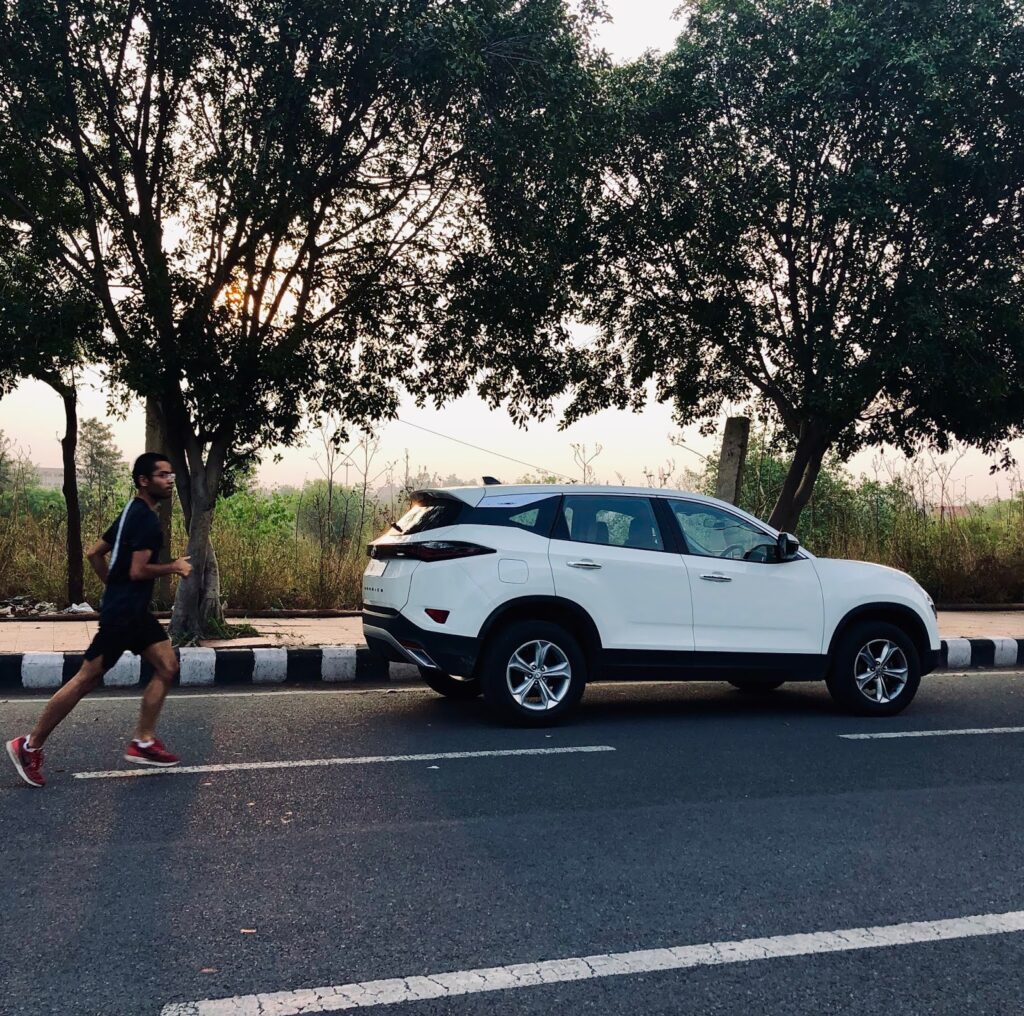 While the Harrier has had a good run so far, it is still work in progress

After spending a fortnight with the Harrier, we came out of the experience with mixed feelings. Undoubtedly, it has had a good run so far and is definitely a step in the right direction for Tata Motors. A sign of better things to come. The styling is a phenomenal departure from earlier products, and space and comfort inside the cabin is much better than any of its competitors. But in certain key areas, the Harrier still feels like work in progress. The engine and driving dynamics particularly, are areas that need more work. Something that we keep saying for most Tata vehicles. And the Harrier desperately needs an automatic variant.

However, Tata Motors has absolutely aced the pricing and pegged the Harrier at a sweet spot between INR 12.99 lacs and 16.75 lacs. No matter which variant you go for, the Harrier provides supreme comfort and a decent feature list, although its competition provides a greater level of refinement. So if Rough Luxury is your thing, the Harrier is a good option to consider. With the MG Hector and Kia Seltos on the way, it would be interesting to see how the Harrier continues to hold its turf.