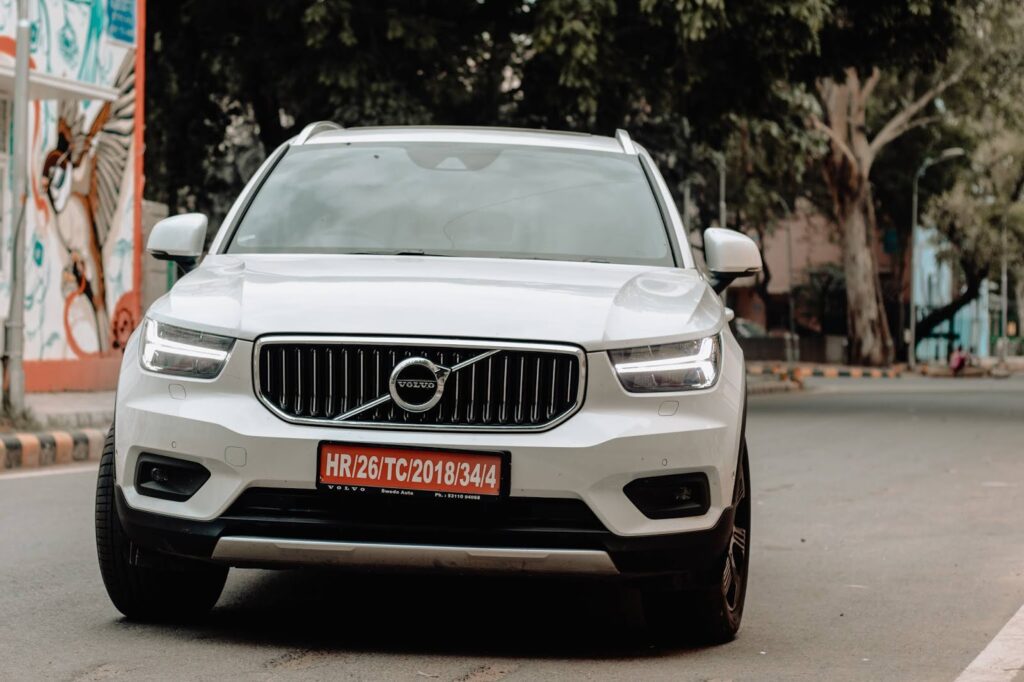 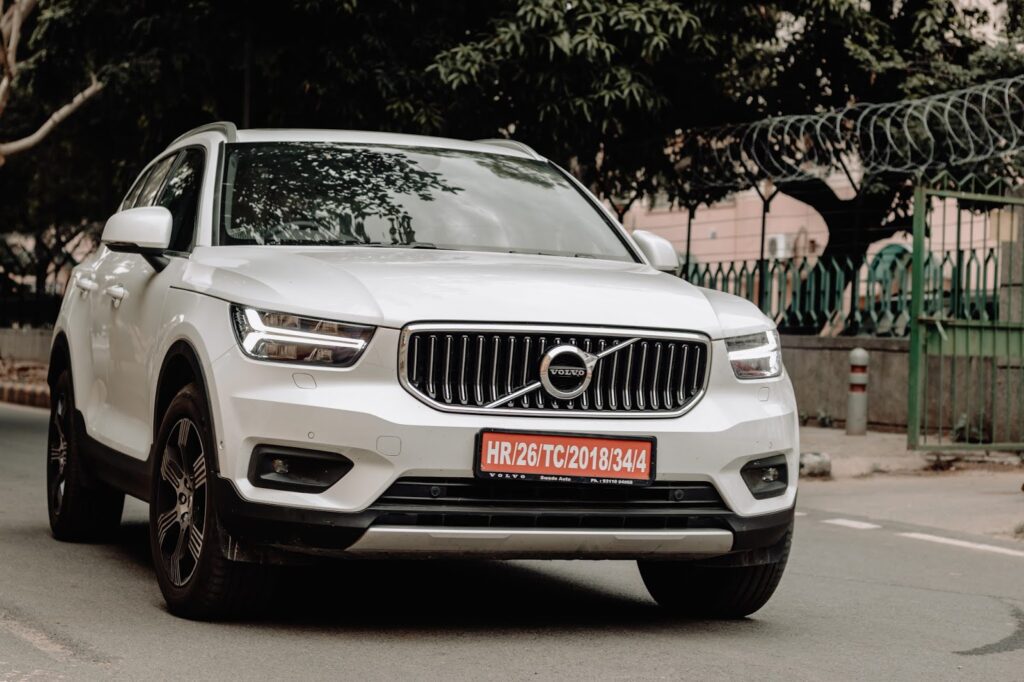 Rarely does one come across technology that transcends its purpose to become more than just a feat of engineering. Or a mere tool in your hands. And when one does, it is magical. The Volvo XC40 is one such experience – a marvellous tech-enabled disruption that brings  automobile engineering closer to a human level. Sculpted with care with a distinct youthful character, it is built around you to simplify everyday life on the move. Volvo’s first foray into the entry level SUV market is an amalgamation of all that the company is good at, wrapped up in a distinctively youthful package that is aimed at the next generation of car buyers. We spent a week with the XC40 Inscription trim to find out just how appealing it is, and we came out of the experience thoroughly impressed.

In terms of design the XC40 is a picture of urban cool and panache. It has the distinguished Volvo pedigree, looks like a part of the family, but its tight stance and angular lines are a departure from the rest of the bunch. Distinctive features like the inward front grille and the “Thor’s Hammer” day time running lights make their way into the design, and the large 18″ alloy wheels with Pirelli P Zero tyres, and its 211mm ground clearance gives it a tall and commanding stance. The XC40 looks particularly menacing when viewed from the side, and the sharp lines make their way to the back of the car as well. The boot lid spoiler is a nice touch, and overall, Volvo has done a stellar job with the design of this car. The XC40 looks like an out and out SUV, which gives it a strong on-road presence, even amidst larger and pricier SUVs. The small and compact footprint is actually a blessing in Delhi traffic, and we found the car to be the perfect size for a comfortable everyday urban commute. 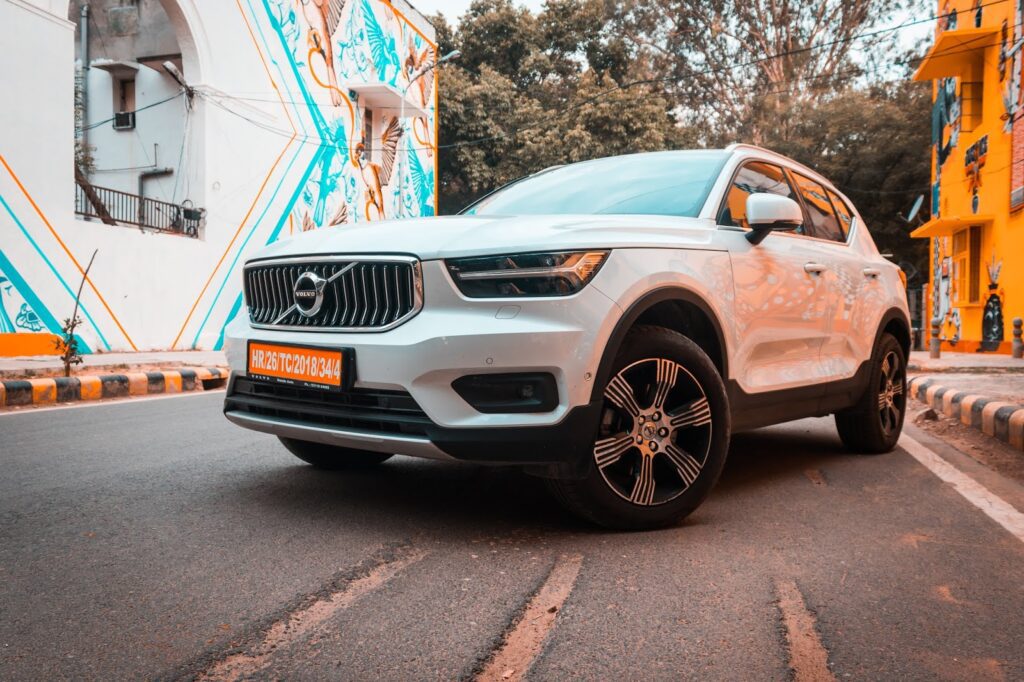 The Volvo XC40 is a picture of urban cool and panache

But don’t let the compact size fool you. As the XC40 is a haven once you step inside the cabin. You are greeted with a plush alcantara and leather interior, with wood inlays thrown in for good measure. The cabin design is as usual, overtly Scandinavian, and XC40’s interior feels like it’s built around you. The materials used are top notch as we’ve come to expect from Volvo, and the electrically adjustable front seats offer good bolstering and lumbar support. The rear seats however, while being extremely spacious, felt a tad too upright. And the under thigh support is compromised a bit to carve out some extra legroom. Headroom isn’t the greatest. At 5’11” you would often tend to bump your head during ingress & egress if not careful. However, considering its compact size, it has enough room inside. With a large boot and several intuitive & clever storage spaces. In its ability to understand passenger needs while on the move and utilise cabin space efficiently, is where the XC40 wins big. The front door pockets are large enough to fit slim laptop bags, the front arm rest houses a trash compartment, and the driver’s seat has a small storage space under it as well. The XC40’s interior is dotted with such unique storage options, and makes all the clutter disappear magically.

The Inscription model comes loaded with a long list of features from Volvo’s more expensive XC60 and XC90, and it is refreshing to see that Volvo has not skimped out on the goodies for its entry level offering. One of the standout features is the massive 9″ touchscreen infotainment system, which has been borrowed from its more expensive siblings. Equipped with Android Auto and Apple CarPlay, this is one of our favourite infotainment systems in the industry, and it shines in the XC40 as well. The eye popping Orrefors crystal gear shift knob by the legendary Swedish glassmaker makes a stunning statement as well. Other features include a wireless charging pad in the front, a two-zone automatic climate control, an expansive panoramic sunroof, and an automatic rear tailgate which props up when you hover your foot under the back of the car. There’s also a 13-speaker Harman Kardon sound system, and while it pales in comparison to the Bowers & Wilkins system in the XC90, it manages to get the acoustics sorted sans frills. In terms of safety, the XC40 comes with all of Volvo’s latest technology, including Pilot assist, Lane Assist, Hill Descent Control, Park Assist, and radar guided Automatic Cruise Control. It senses the speed of the vehicle ahead and cruises accordingly. 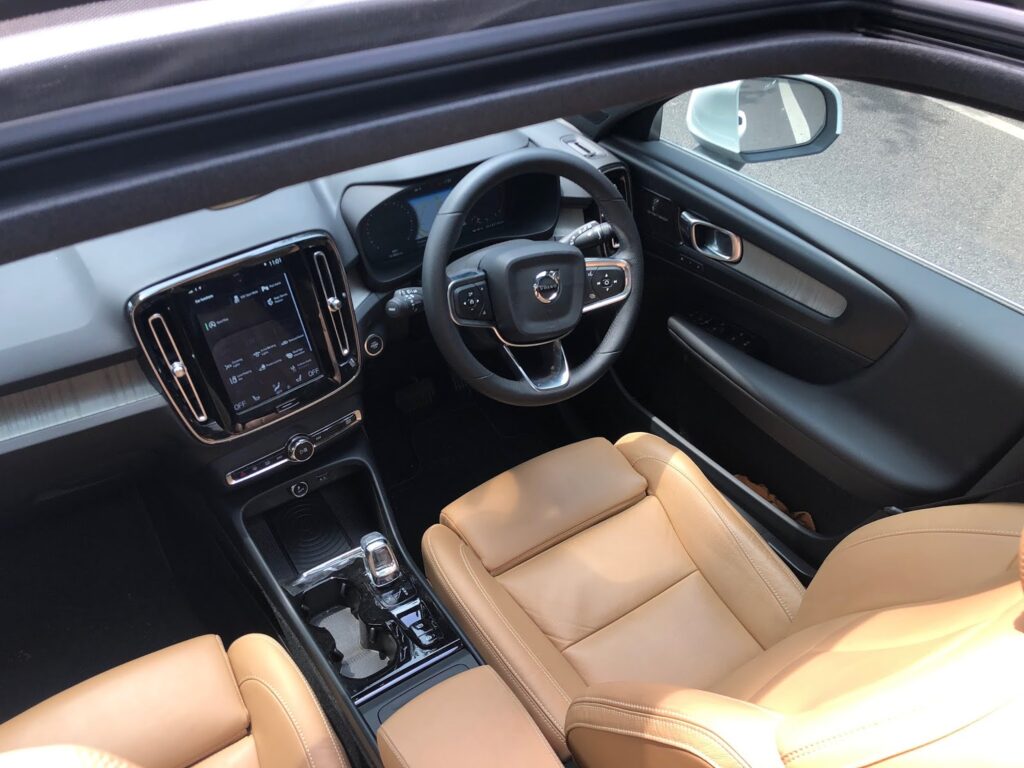 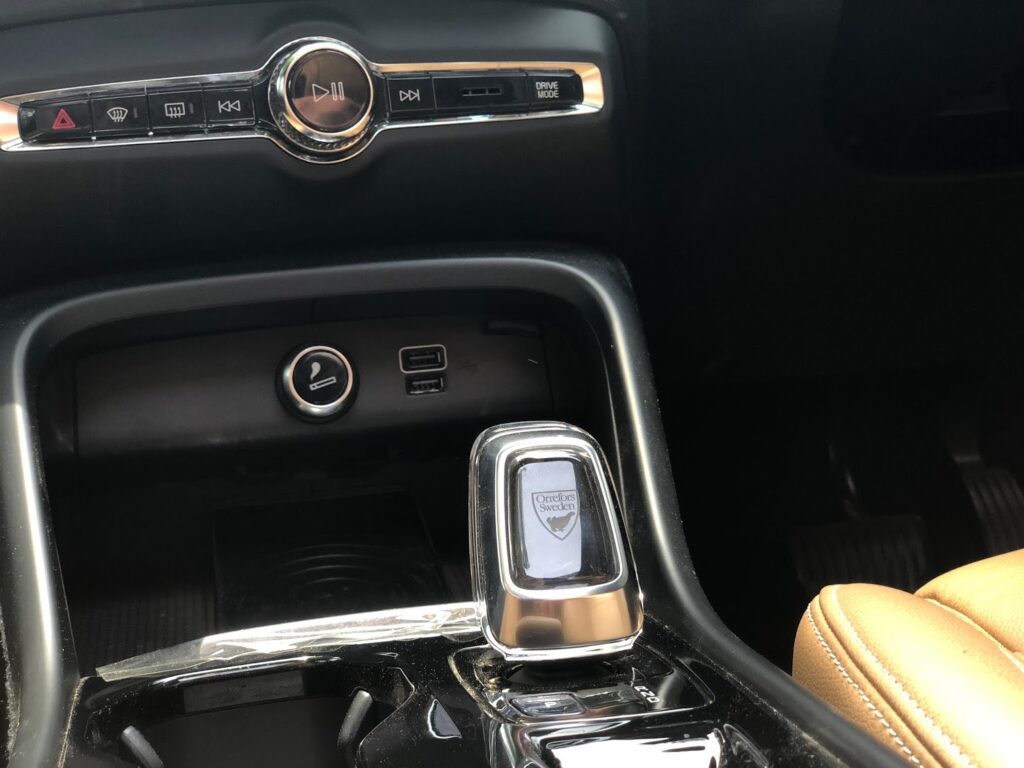 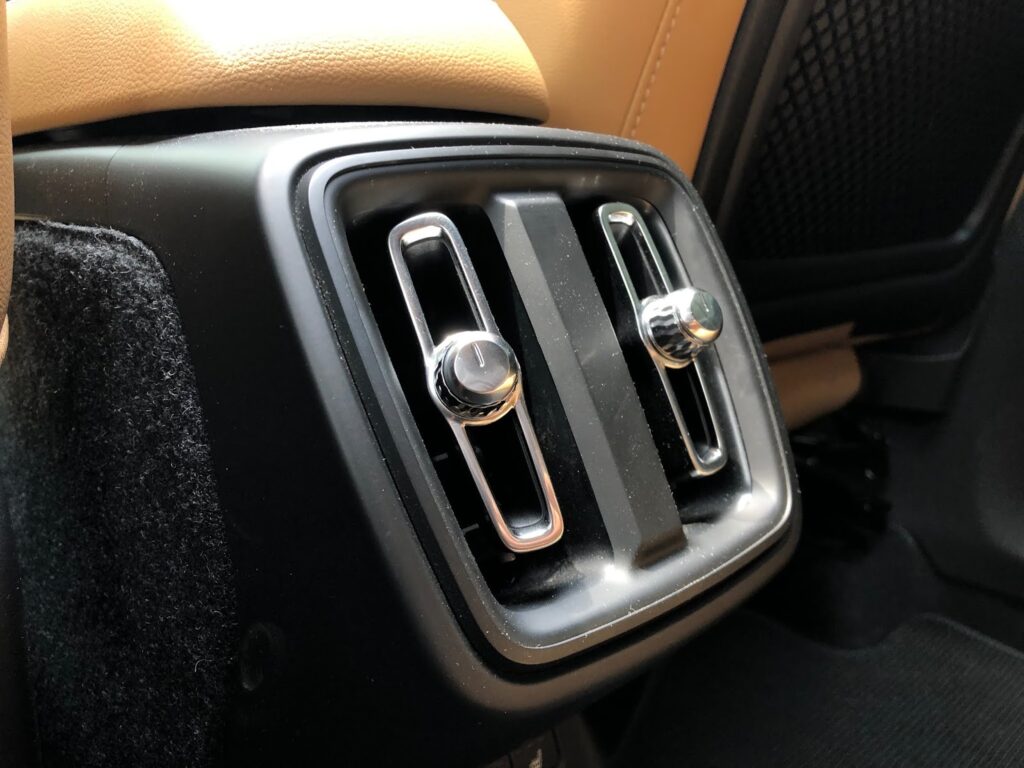 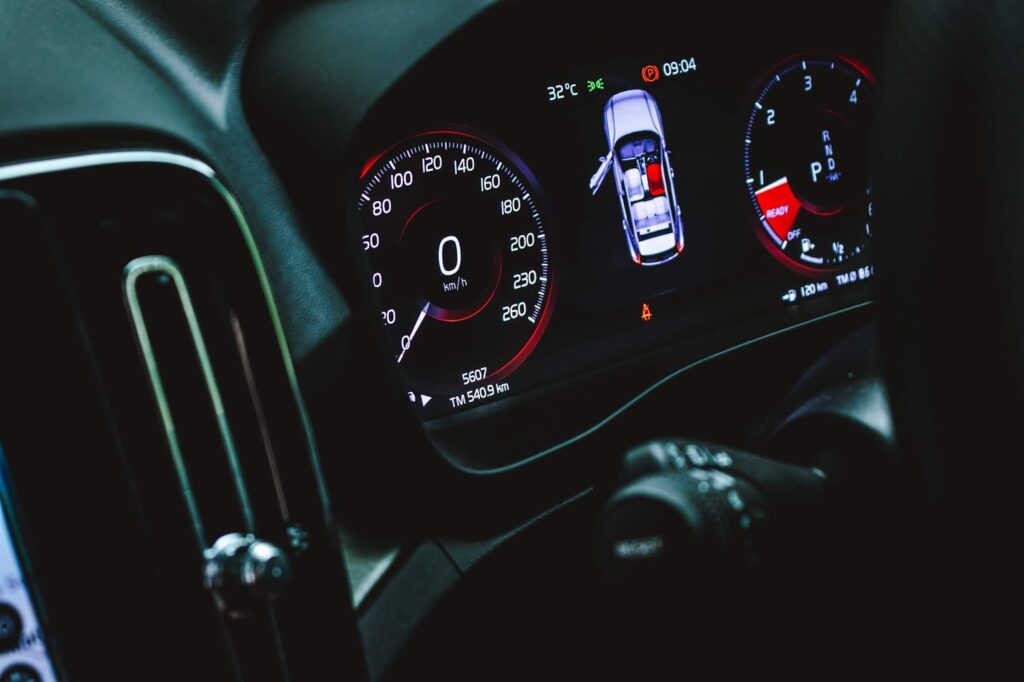 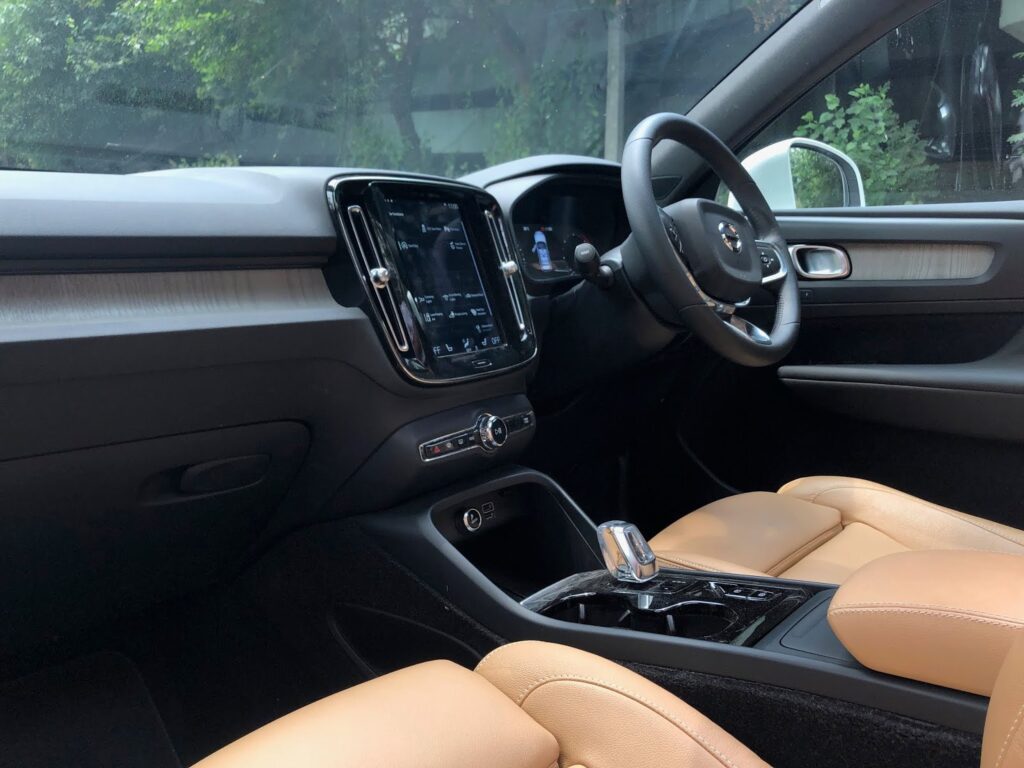 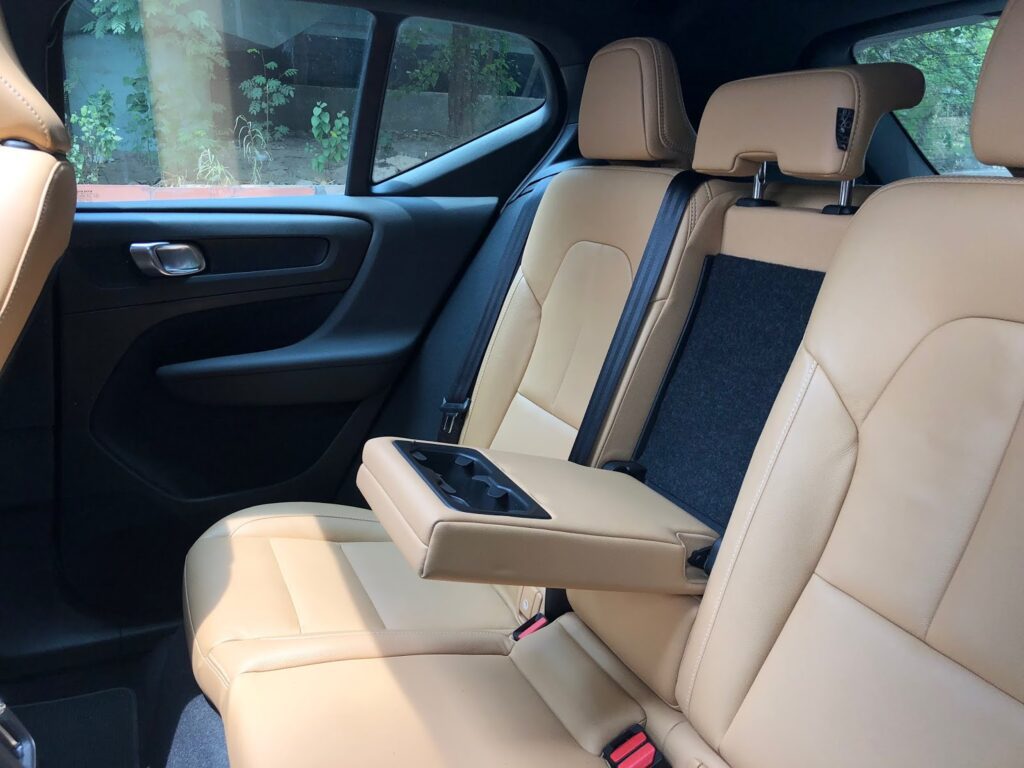 Under the hood, the XC40 comes with only one engine option – a 2.0L diesel motor producing 190BHP and 400Nm of torque. The engine is punchy and has plenty of power in the low range, and while its not too sporty in its setup, it does offer ample grunt in the city and out on the highway as well. Reaching double digit speeds takes no effort at all, although there is a slight delay in acceleration when you really put your foot down. As an urban offering, it does the job splendidly. The 8-speed automatic transmission is a smooth-shifting unit and can be set to manual at the flick of the wrist. It is instantaneous and responds very well to throttle input. A big miss however is the lack of paddle shifters. The Inscription variant surely deserved an extra dose of sportiness. Overall the Volvo XC40 is a fun car to drive with a light & direct steering that can literally be operated with a finger. Its front biased 4WD system gives it plenty of grip and stability in the corners. It comes with four drive modes – Comfort, Dynamic, Eco & Off Road. If we had to nitpick and find chinks in the armour, we would say the Dynamic mode isn’t quite ‘dynamic’ enough. Considering that the compact SUV is aimed at Gen Next, a slightly more nuanced Sport mode would be welcome. While it is certainly not an all out performance machine, the XC40 provides an overall positive driving experience, one that will leave you with a huge grin on your face. The able performance does come at a price though, and the XC40 has a slightly stiffer ride than we would have liked.

All in all, the Volvo XC40 is a refreshing disruption from the monotony that some luxury manufacturers have fallen into. And Volvo’s attention to the little things really shine through. It is solidly built – sculpted, chiselled and carved. Not just metal put together. The XC40 doesn’t dump features on you either. It waits for the moment you think you need something, and gently presents a solution. Almost human like in its behaviour.

The Volvo XC40 knows its audience well. It is for the next generation of young and affluent car buyers – luxury connoisseurs who are conscious and connected, and seek out brands with a conscience. It has all the understated Scandinavian sophistication and yet is a head turner on the road. On two different occasions we had well-heeled shoppers in tony Khan Market in Delhi stop by and ask about the car, sit inside and admire it. An experience we have never encountered before with automobiles in this segment. 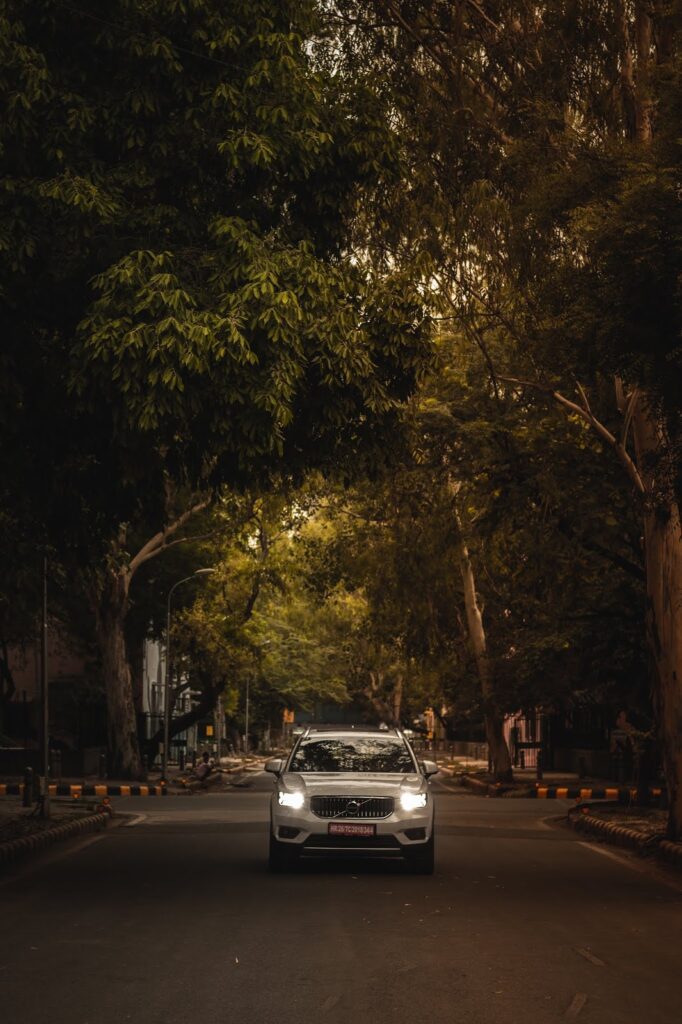 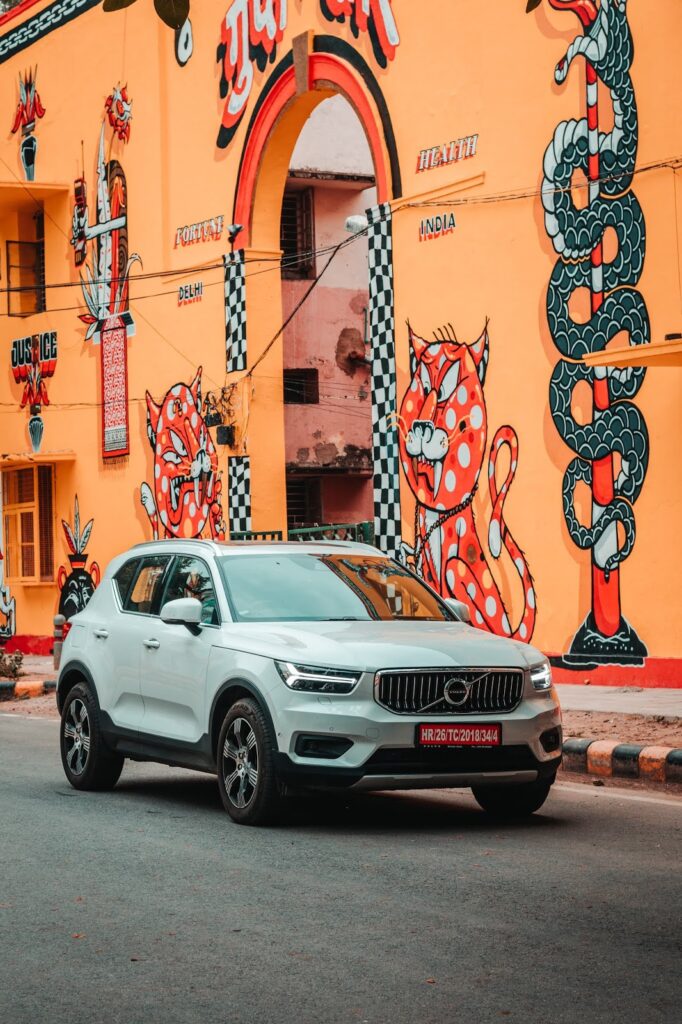 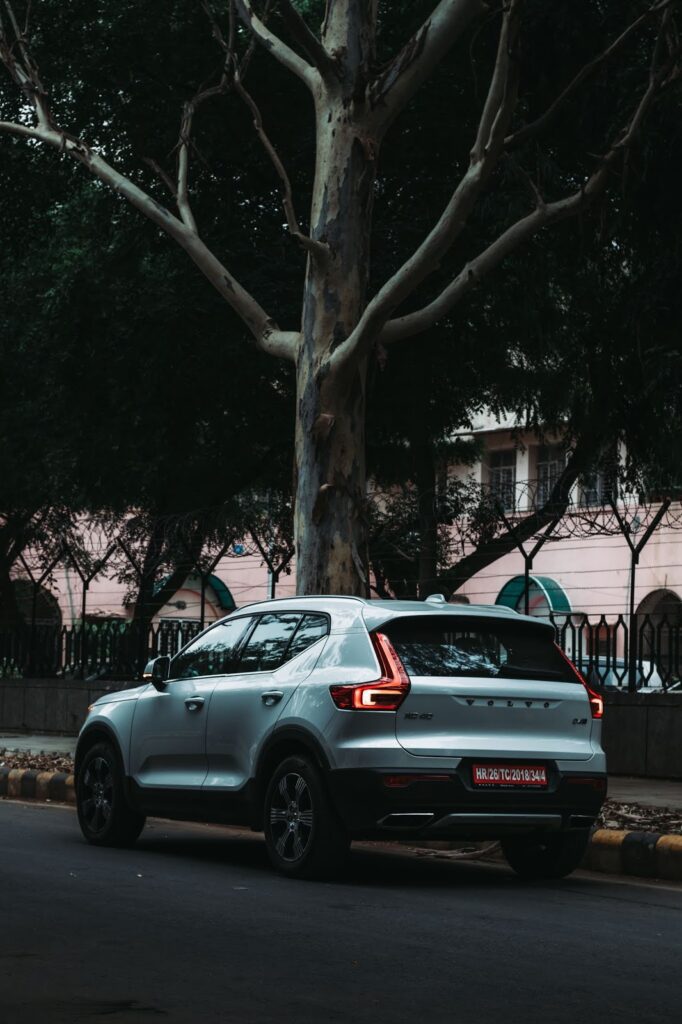 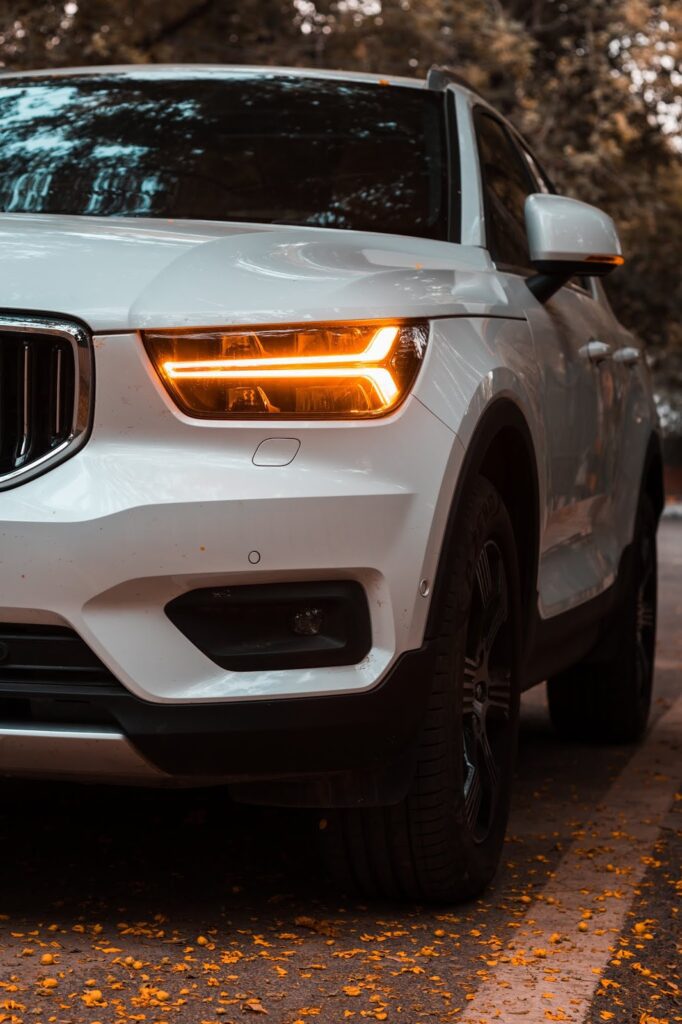 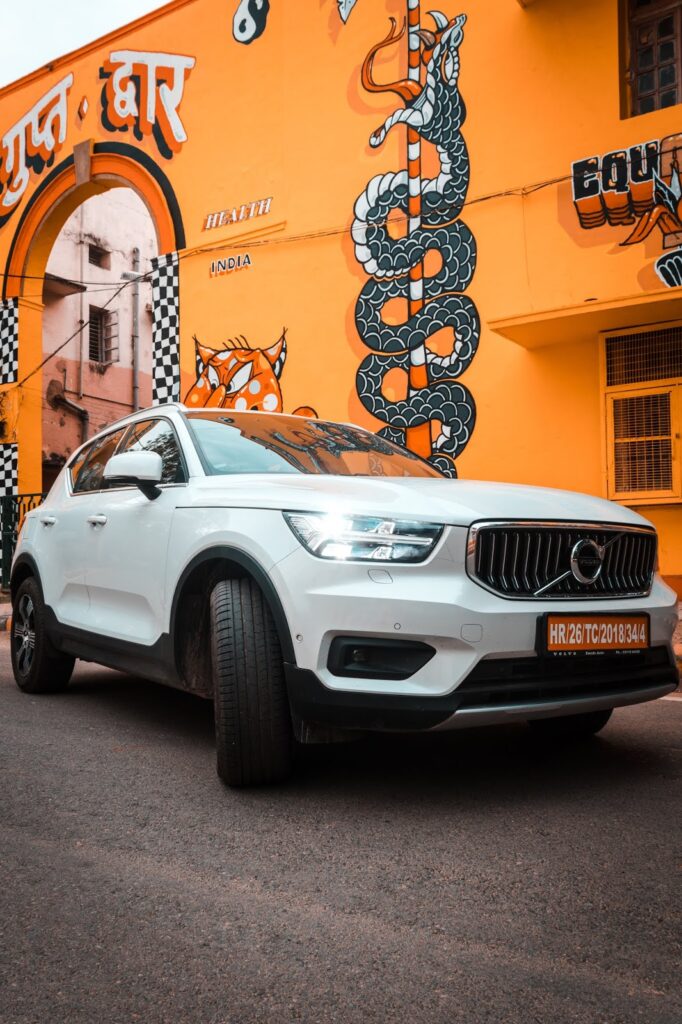 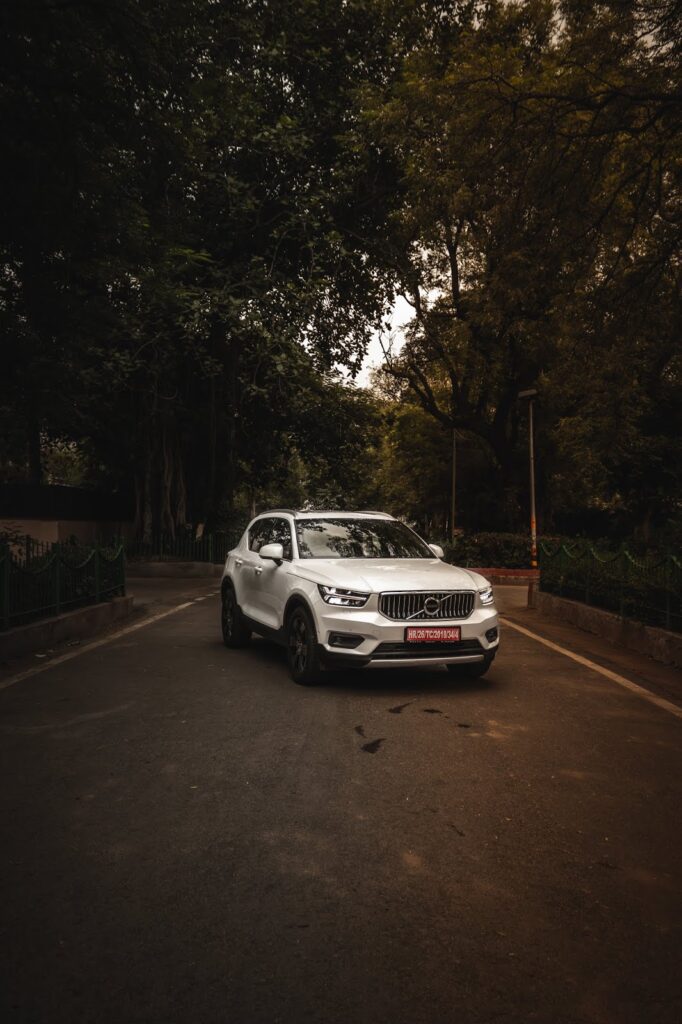 Designed and made for you(th)

The XC 40 come across as a fantastically well thought out package, and while it is certainly expensive at INR 39.90 – 43.90 lacs, it surpasses the level of sophistication that competitors in the segment offer. More than that, it has immense character. Stepping into the XC40, you get a feeling that it was made for you. Things slip in place, there is no clutter or wires hanging as the phone charges wirelessly, and the music starts magically from where you left, every time you step in and press the engine start/ stop button. In a moment it becomes your personal world on the move. And that’s a feeling few cars offer.

It is easy to fall in love with the Volvo XC40. Just take our word for it.