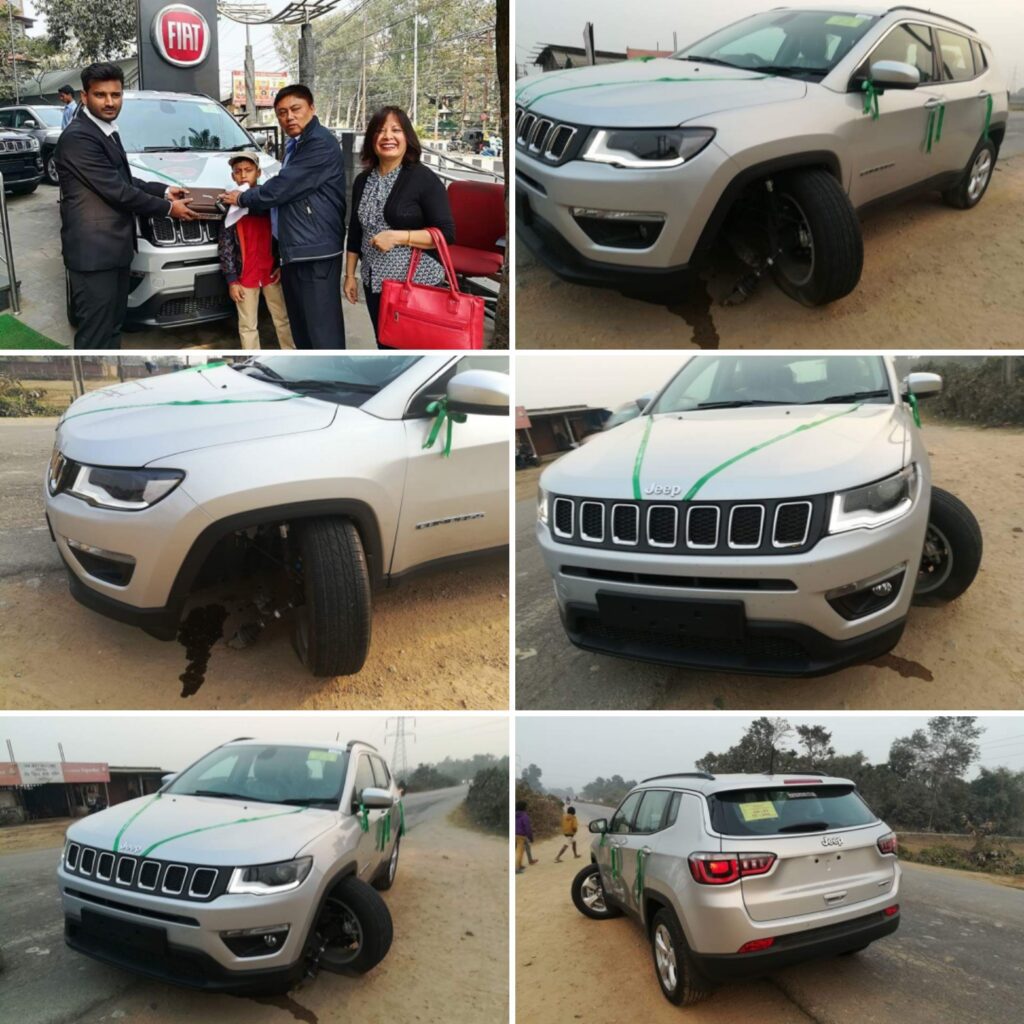 A brand new Jeep Compass lost it’s front wheel in a bizarre and somewhat dangerous incident, raising concerns yet again about quality issues at the vehicle’s manufacturing plant in Ranjangaon. In the last quarter of 2017 Jeep had to recall around 8000 vehicles in North America and another 1200 in India, due to a fault in the front passenger air bag. The issue was related to undetected loose fasteners.

This particular incident took place on 30 January 2018 at around 3:00 pm, a little ahead of Nagaon in Assam. Mr. Jayanta Phukan, a senior official of Oil India Limited in Duliajan was on his way back with his family, after taking delivery of his brand new Jeep Compass from Mahesh Motors, Guwahati. The variant was the Longitude Option and he had just paid INR. 20.31 lacs to get the vehicle on road. The car barely covered a distance of 172 kms from the showroom over 3 hours, when the arm & ball joint assembly detached from the hub (steering knuckle) and the front left wheel came apart.

Mr. Phukan was behind the wheel accompanied by his wife, 8 year old son, a friend and their driver. Luckily, a major mishap was averted since he had slowed down with the intention of pulling over for a quick break along the highway. The car was at a speed of around 30 km/h when the incident happened. 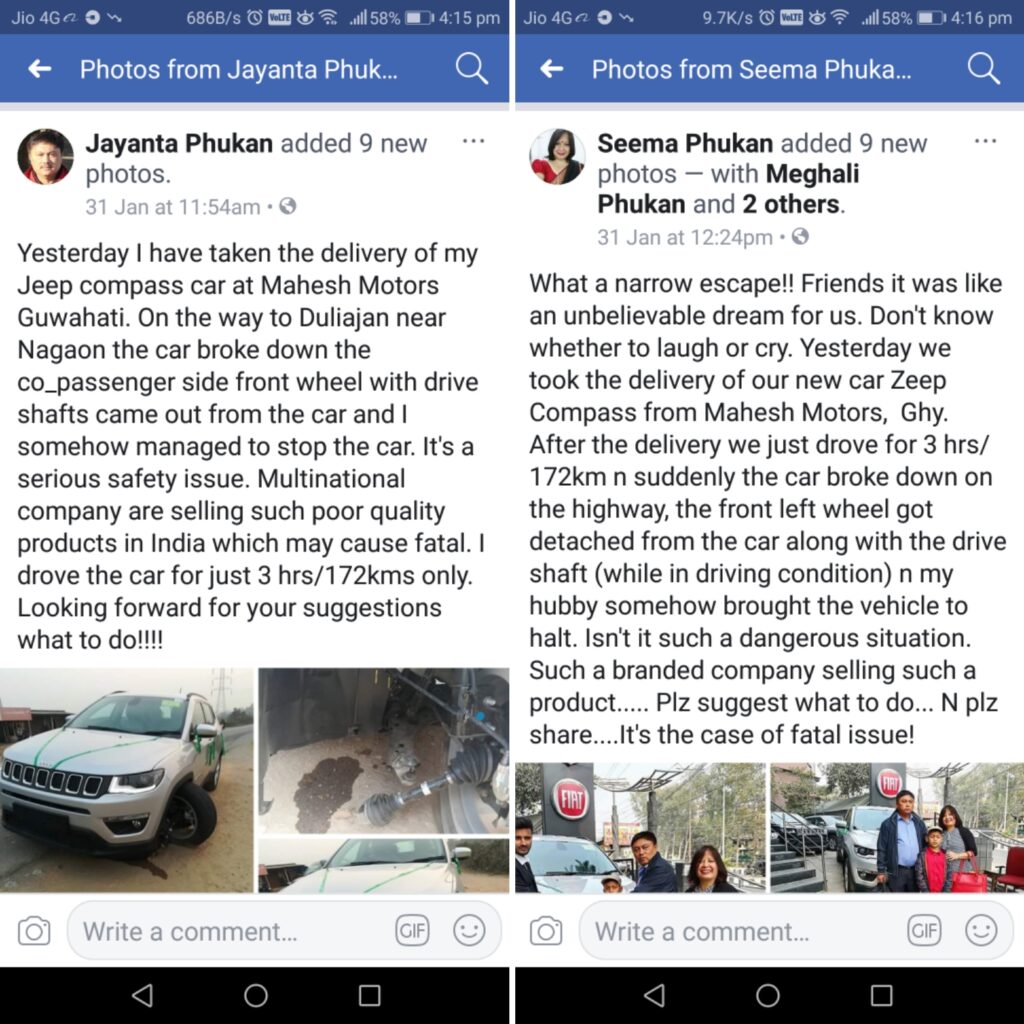 The couple shared their experience on social media and uploaded a series of images. There is no sign of external impact or body damage, and neither can the tire condition be faulted. It seems to be a case of human negligence during QC and inspection (both at the plant and dealership) and can perhaps be attributed to undetected loose fasteners yet again. In this case, it seems the fasteners securing the ball joint to the hub gave way when the wheel turned and brakes were applied.

We spoke to Mr. Phukan at length, and though shaken by the incident, he seemed satisfied with the final resolution that FCA has offered in the case. He refused to consider a repair option which was extended by the company, and FCA has now offered to replace the car and reimburse all expenses arising out of this unfortunate incident. Things could have gone horribly wrong had the vehicle been at a high speed or in hilly terrain. 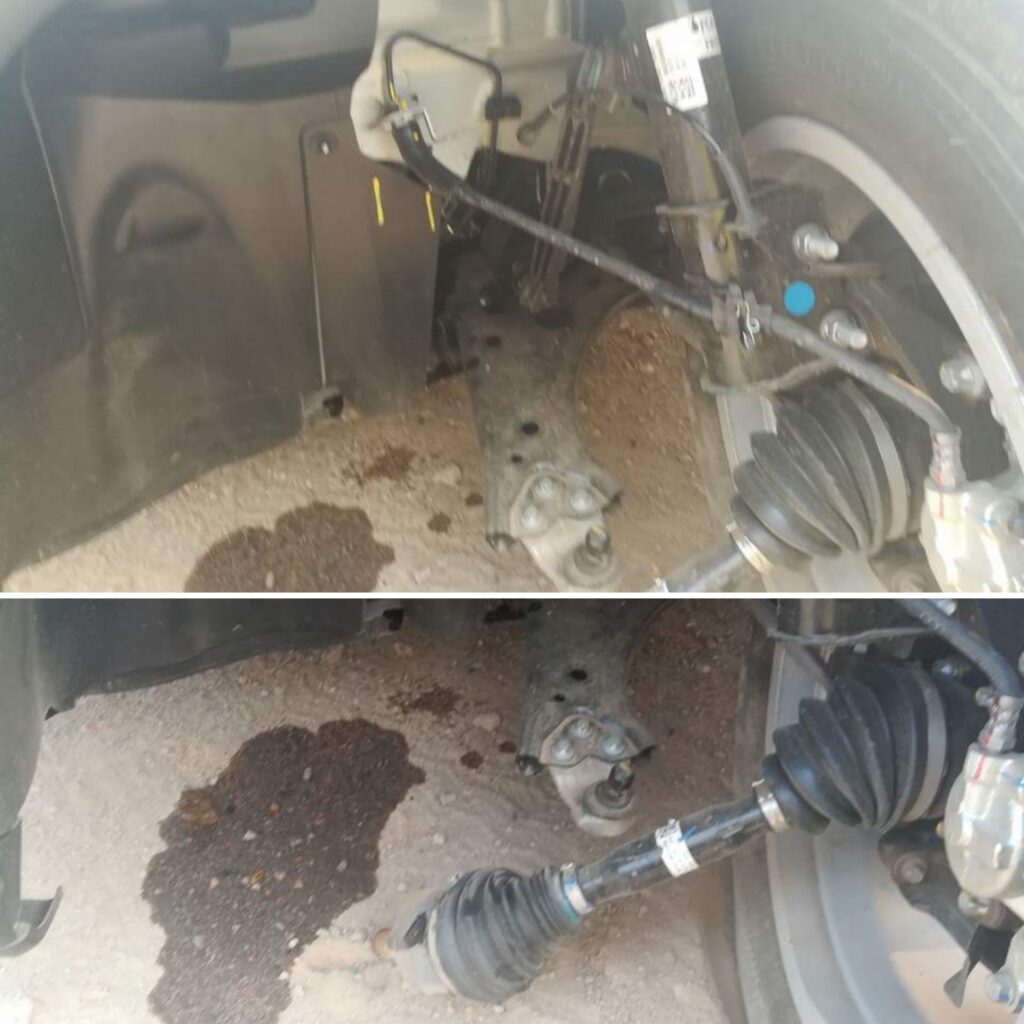 According to Mr. Phukan, Jeep Helpline provided complete assistance after the incident in towing away the vehicle and arranging for their onward journey. FCA has however, not clearly stated what may have caused the accident, but sent a statement which reads as below:

“The FCA customer service team attended to Mr. Phukan as soon as we were informed about the incident and we resolved the issue within 24 hours. We are investigating this incident thoroughly and are not aware of any other instances. Nonetheless, we are immediately reviewing and reinforcing our quality assurance activities to further ensure the quality of our vehicles in the marketplace.”

It has been less than six months since Jeep Compass was launched, and acclaimed as the ‘Car of the Year’ and ‘SUV of the Year’. While the frenzy around the car remains, issues seem to be creeping up already. That it should encounter quality issues hours after leaving the showroom is a matter of concern. Compromises can be utterly unforgiving and the company needs to keep a sharp focus on quality and safety from hereon. Recurring incidents such as these could mar the carefully crafted imagery and hype surrounding an otherwise capable vehicle.