When it comes to passenger cars, Maruti Suzuki has been at the forefront of almost every segment in the country. Cornering about 45% market share consistently, their offerings have always dwarfed the competition in terms of sales, even though their products haven’t necessarily been the most advanced.

In recent years however, they have been on the path to create more progressive products both in terms of design & performance. The Baleno, Brezza and Ignis have been super successful in their respective space, and their premium NEXA retail program has added a dash of sophistication to the brand. 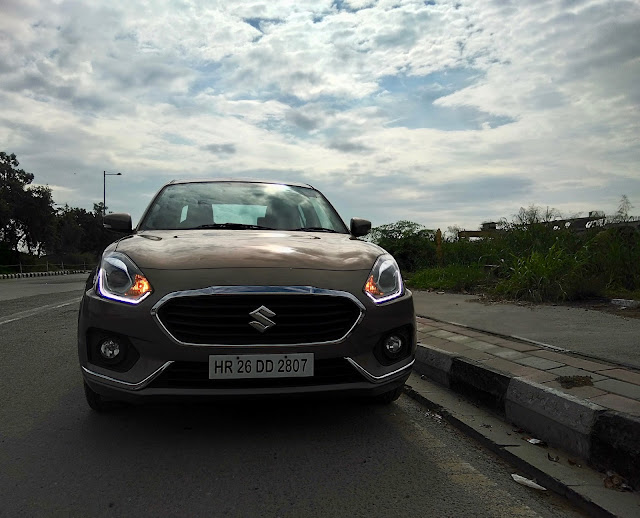 Amongst the older lot of cars from their stable, the Swift Dzire has consistently stood out as India’s best selling sedan for the last few years. It has dominated the sub-4 metre sedan space like no one else, though the product itself didn’t quite inspire. It was pretty much a Swift with a boot; an average mass market product that was pegged as a value for money proposition.

The Dzire has been through a makeover earlier, but it definitely needed a shot in the arm in the current scenario, considering that much of its numbers were now coming from the taxi segment. A clear indication that the previous generation was indeed in the last leg of its life cycle. The sub-4 metre segment itself is slowly losing out to the compact SUV segment, with young India now demanding new styling, performance and features in the INR 5-10 lac segment. It is not enough to just be an average looking fuel efficient car with a boot anymore.

With the launch of the third generation Dzire, not only has ‘Swift’ been dropped from the branding to give it a clear identity of its own, but a lot of new features have been added along with oodles of style. Making it literally, an object of desire. The new look has a street presence that is miles ahead of its previous avatar and as we spent a week with the fully loaded 1.2L Petrol ZXi+ AMT, we discovered some more qualities that would probably make this one the go-to sedan for many families as well as young adults in the year ahead. 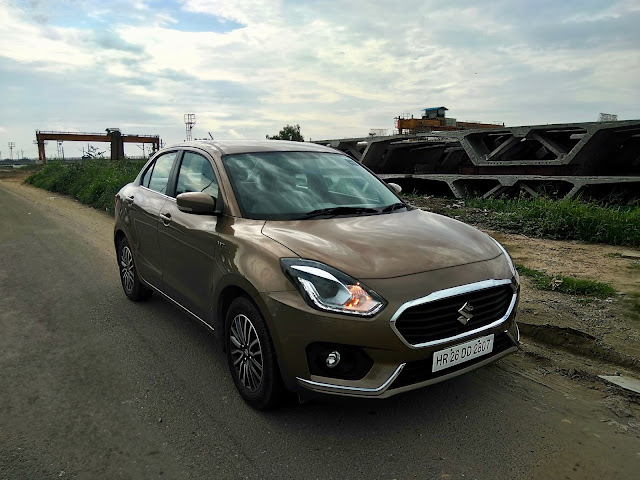 The new Dzire has been built from scratch as a sedan, and one look at the car confirms it. Despite being sub-4 metre, the Dzire looks well balanced in its design. The short overhang at the back and long nose with a muscular bonnet makes it look quite handsome. The wider dimensions of the car make for an impressive presence and the lower ride height adds to the visual flair. The wide hexagonal chrome encased grille with bold horizontal slats, teamed with the LED headlamps & DRLs give the car a very upmarket look when viewed from the front. While its side profile isn’t the most striking, it does look well balanced and proportionate with the 15″ alloys, though we would have preferred the shoulder line to be a bit more pronounced for a muscular appeal. The rear features LED tail lamps and a wide horizontal chrome strip running across, but doesn’t quite match up to the bold character of the front. This car has been in development for almost four years and now looks like a proper sedan, rather than a hatchback with a crummy boot. In its segment, it is certainly one of the better looking cars amongst the current lot. 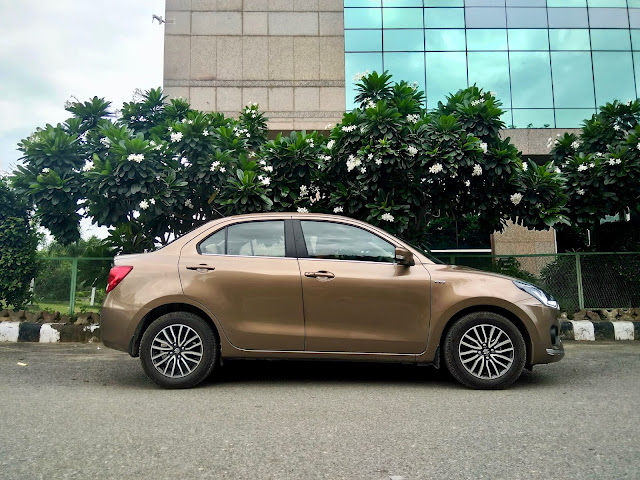 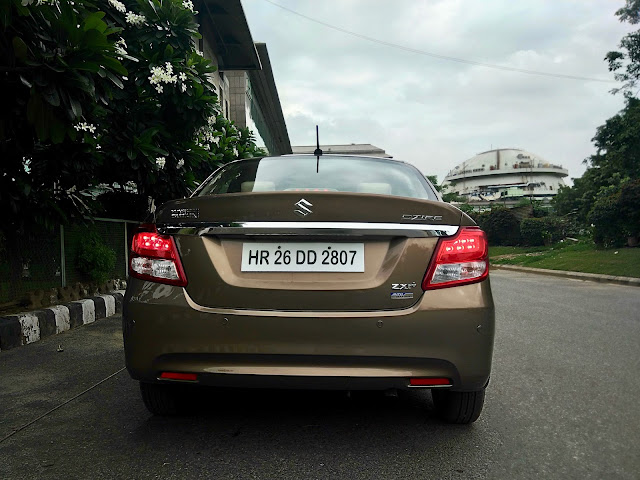 Step inside the new Dzire and you are welcomed by a cabin design similar to Maruti Suzuki’s other new offerings. The interior looks sharp and well finished with dual tone accents and faux wood inserts on the dashboard, steering wheel and door handles. While the quality of material, fit & finish is reasonably good considering the segment, the plastic bits seem a bit compromised. The buttons, switches as well as the touch infotainment screen doesn’t have the tactile feel that you would expect, and that is when you realise that you are still in mass market territory. The flat bottom steering wheel is a bit over the top and way too big for our liking. It doesn’t have the same grip and feel of the Volkswagen Ameo wheel, for instance. Having said that, the overall design is aesthetically pleasing and one does appreciate the effort that has gone in to make for a semi-premium cabin. 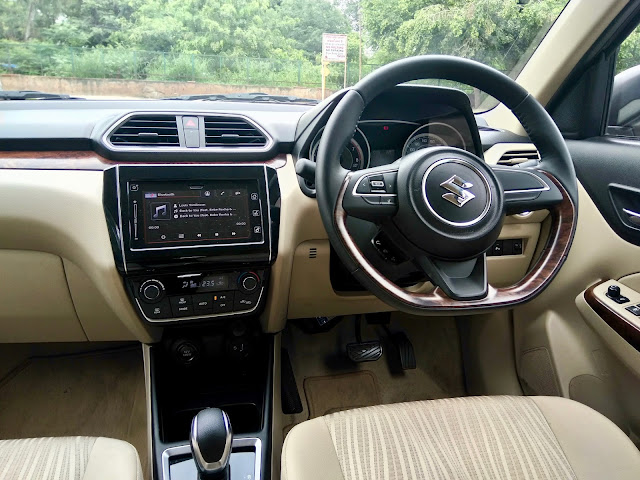 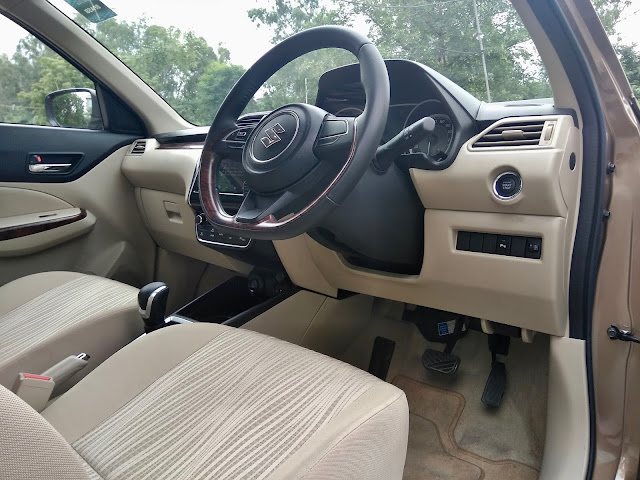 The new Dzire scores big points when it comes to cabin comfort and space. It is 40mm wider than before, and the wheelbase has been extended by 20mm, making a huge difference in cabin space. The front offers good support for both the driver and passenger, with wide seats for full bodied adults to sink in with ease. But it is the rear where the car really shows its strengths. It has more space than any other car in the segment, with a wide central armrest and two cup holders. You can comfortably sit cross legged even when the front seat is occupied and pushed back. Headroom is adequate and won’t be a cause for any discomfort even for taller passengers. The overall cabin is airy & roomy, and for a moment you may just forget that you are inside a sub-4 metre compact sedan. The 378 litre boot isn’t the biggest in the category, but is more than sufficient for those weekend family road trips. 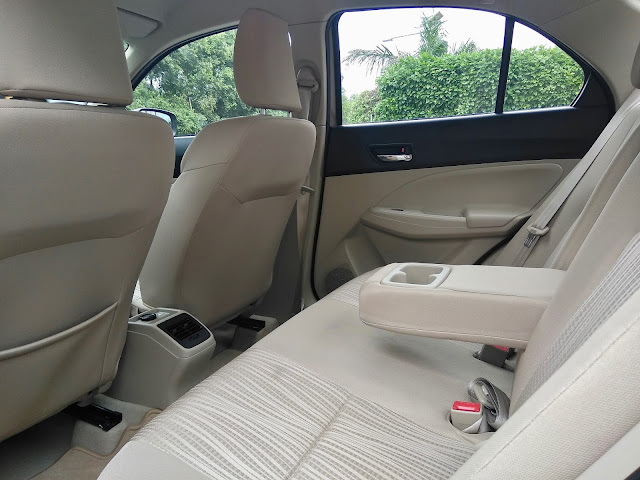 Our test car was the ZXi+ variant, which comes packed with some impressive features. There is keyless entry and an engine start/stop button, which we feel should now be adopted by all cars as a standard feature. There are automatic ORVMs, automatic climate control with rear vents and auto headlamps as well. The capacitive infotainment touchscreen is the same as what you find in most of Maruti Suzuki’s new cars, and comes equipped with Apple CarPlay and Android Auto. Bluetooth connectivity is seamless and there is aux & USB connectivity, with charging points both at the front & rear. The sound system impresses and the touchscreen automatically switches to camera mode when the reverse parking sensors are activated. Safety features come in the form of dual airbags and ABS as standard on all variants.

The new Dzire comes with two engine options. The 1.3L DDiS 4-cylinder diesel engine produces 73 BHP power and 190 Nm of torque making it a frugal engine choice with high fuel efficiency. However, for those interested in a smoother powertrain, the petrol option would be more appealing. The 1.2L petrol motor produces a peak power of 82 BHP and 113 Nm torque. Our test car was the petrol mated with the 5-speed AMT transmission, an option which has slowly been introduced in all the new products by Maruti Suzuki. 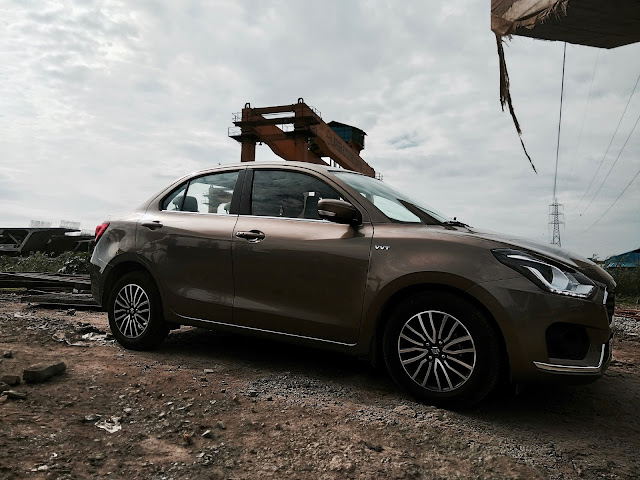 The petrol avatar is an enjoyable drive in the city, though a bit of extra power would have given it a lot more spunk. But this is an urban family car and not exactly driven by performance specs. Yet it does not disappoint. The engine has a nice throaty rev, the steering is direct and well weighted, and the car’s handling is surprisingly good. It is a lot lighter than its predecessor, and with the squatter dimensions feels a lot more low slung and planted. There is minimal body roll and the ride quality is surprisingly good, thanks to a brilliant suspension. Even hard bumps are cushioned well and absorbed without a bother, making this perhaps the best ride quality in the segment.

While the AMT transmission does take away the stress of stop & go city traffic, it is a bit jerky. In automatic mode the gearbox upshifts way too quickly for our liking between 2000-3000 rpm, without really exploiting the full power of the petrol engine. While it is not so evident during stop & go city traffic, you get to feel it while going full throttle on an open stretch or while overtaking. The lag in exploiting split second gaps or manoeuvres is evident, as the car suddenly throws you forward and then back, while it figures the right gear shift. The slow response time and those few precious seconds lost can get frustrating at times. But the problem is contained by switching to the manual mode. That’s when you are more in control, revving up to 3000-4000 rpm before shifts, flooring the throttle and experiencing the joy of engaging with its true potential. While it is not exactly a driver’s car, it handled whatever we put it through with surprising ease. The power delivery was smooth and even in manual mode the AMT downshifts automatically when needed, which is helpful. 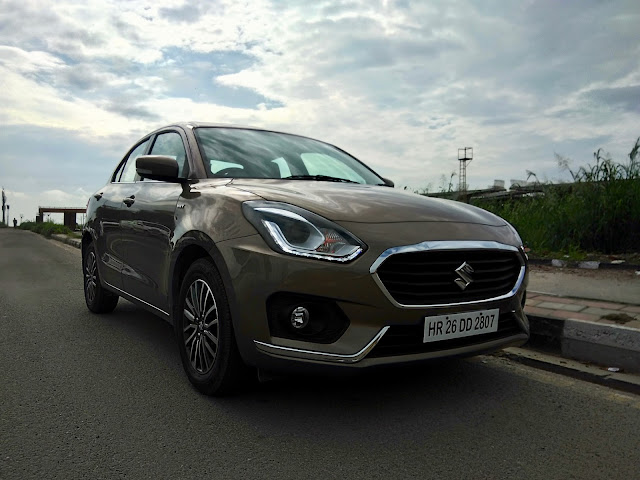 While on paper the efficiency figures are mind boggling, we clocked an average of 12.8 km/l after driving over 500 kms. The company however claims that the petrol engine gives a mileage of 22 km/l and the diesel is the most efficient in the country with figures of 28.40 km/l, which is an improvement over the previous generation.

In conclusion, the new Dzire brings in purpose and maturity to the highly competitive and unique sub-4 metre sedan segment, which is seeing quite some action in 2017. With premium styling and trims in a value package, it is likely to retain its numero uno position for a while. As an overall package it beats most of its competitors, and with prices starting at INR 5.40 lacs for the base petrol variant and INR 6.40 lacs for the base diesel version, it is quite well placed on that front.

Our test Dzire, the top of the line petrol ZXi+ with AMT comes equipped with all the bells and whistles one could ask for, at a price of INR 8.41 lacs. The range topping diesel with the AMT is for INR 9.39 lacs. At these prices, the new Dzire may seem a bit indulgent to some, but as a complete package it should once again prove to be a winner for Maruti Suzuki. It is a step in the right direction for India’s oldest car manufacturer, who is clearly looking to seduce new buyers as well as those looking for an upgrade, in style. And with the new Dzire it certainly would manage to do so.