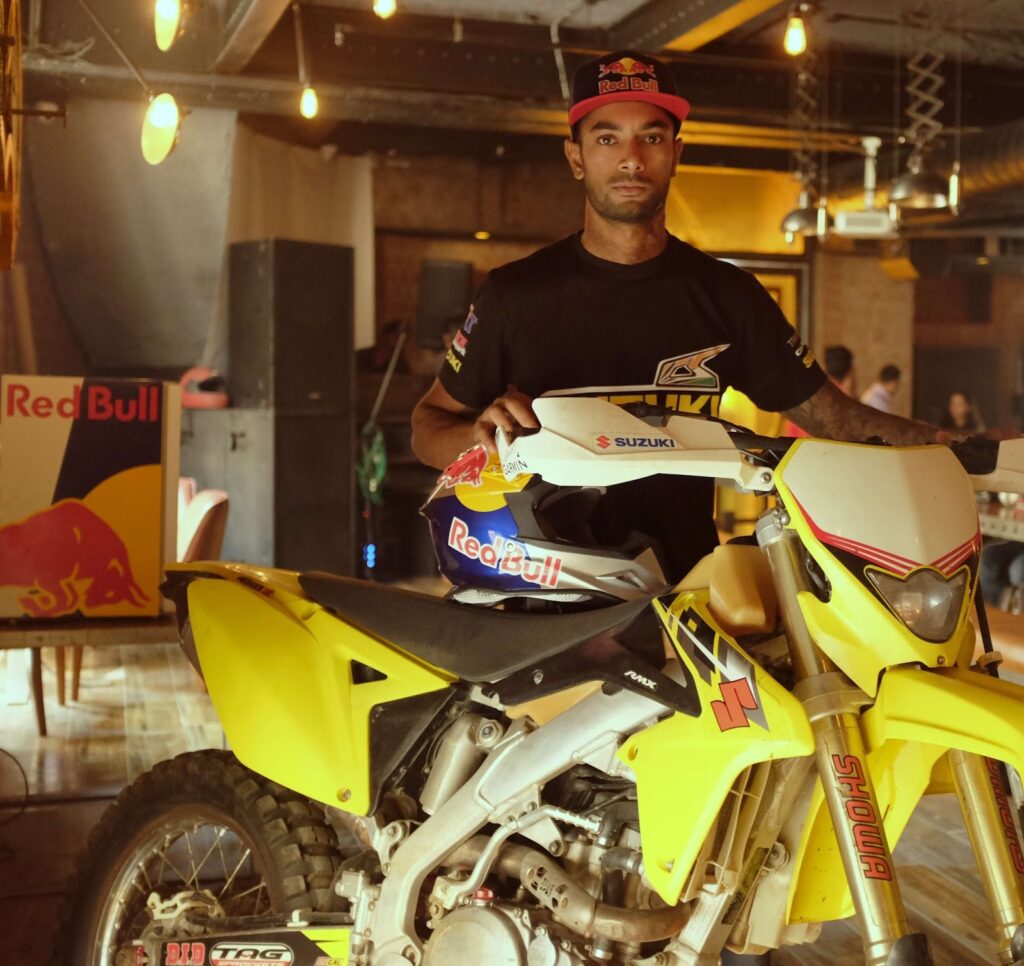 He is India’s most accomplished supercross & rally-raid champion. The finest off-road rider we ever had. Consistent and relentless in his pursuit for seemingly impossible challenges. Resolute and dauntless in his fight against all odds. Always passionate about #ChasingRainbows.

His skill and determination have helped him breeze past numerous challenges (including a near fatal experience in 2013) and moulded him into the finest rider that India has ever produced. He is quite literally one in a billion plus.

Meet CS Santosh. India’s first and only rider to participate and complete what is perhaps the most treacherous endurance race on the planet – The Dakar Rally. At age 30, he stands tall at 6’0″, is fighting fit, and ready to take on a second Dakar under his belt in Argentina-Bolivia, early next month.

Raghav Sarma spoke exclusively with CS Santosh, on the sidelines of the official announcement of his participation for Dakar 2016. Here is a peek into the mind of a man who is completely at peace flirting with fire, dancing with danger and living life on the edge.

Raghav Sarma: First of all, congratulation on everything you have achieved till now. You have a lot of young people in this country looking up to you. How does it feel to be the first Indian to compete in the Dakar Rally – the first in a country of over a billion point two?

CS Santosh: When I went to Dakar it was only for me. I didn’t think of the nation and all that. But as soon as I went there, the fact that I am the only one hit me. By default I became a representative of the country. And that’s when it struck me. I didn’t expect it, but now to take that forward with me is a great feeling.

Raghav Sarma: I can imagine that. A huge part of your job is also about putting your personal safety on the line. What motivates you to get up everyday and risk your life to be good at your job?

CS Santosh: I wouldn’t say I risk my life everyday to be good at my job. It’s just that life itself has many risks and is very fragile. You are only here for a certain amount of time and the only thing certain is death. I’m just a guy who wants to go out and ride a motorcycle. So I don’t really look at it as being that risky.

Raghav Sarma: Over the years what are some of the hardships that you have faced and how many bones have you actually broken till now?

Raghav Sarma: How does your family take to your risky profession? Were they supportive right from the start, or were there apprehensions about what you do?

CS Santosh: I don’t come from a family which has any motor sport background. I went to school like everybody else. And then I was going to college like everybody else. But things changed when I got a motorcycle. In the beginning they were like, “what is this guy doing?” They don’t understand the kick, when I’m 17 or 18 years old, and I go out to race. It is never a good image. But things have changed over the years and now they respect what I do, and are very supportive.

Raghav Sarma: Rallying is obviously an integral part of your life, but what do you like to do in your leisure time when you are off the track?

Raghav Sarma: As a Red Bull athlete, what do you see yourself doing in the next year? Apart from the Dakar, of course.

CS Santosh: You know, I have looked up all my heroes and they have all been Red Bull athletes. And now I am a Red Bull athlete. So I’m looking to make it bigger and better, and I need to constantly assess myself. I see all the Red Bull athletes whether it is Robbie Maddison or Travis Pastrana or anybody else, they are always redefining boundaries. So I hope I can do the same when I work with them.

Raghav Sarma: Who do you look up to as a mentor or as an inspiration?

Raghav Sarma: And finally what advice do you have for the thousands of aspiring rally riders who wish to make it big in the international scene?

CS Santosh: Like I said before, life is short. So just go out there and leave your mark in this world. You should go where your passion leads you. Because when you do what you’re passionate about, you also contribute to society.

Raghav Sarma: Thank you and wish you the very best for all your future endeavours. It was great to meet you and all the best for Dakar 2016.

‘In conversation with Raghav Sarma’ is a series of interviews with auto industry leaders, analysts and experts published exclusively on Licence to Drive. Reproduction, copying, sharing or distributing the contents in whole or parts without permission is prohibited.