India is the spiritual home of the small car. Be it congested urban cities or small towns, the only way to survive on Indian roads is to get into a compact car. While a compact hatchback remains the go-to vehicle for most Indians who desire to upgrade to four wheels, a ‘car with a boot’ remains an aspiration for many. The Indian government also gives excise duty relief to vehicles that are sub-four metres, and this peculiar situation has resulted in manufacturers coming out with small and unique three box cars tailored for the market. Cars like Honda Amaze, Hyundai Xcent and Maruti Suzuki’s Swift Dzire have managed to capture this segment with considerable success, and the Swift Dzire continues to be one of India’s best selling cars. The sub-four metre sedan is now an attractive proposition for all manufacturers and every car maker worth his salt has a product in the segment.

Ford is no exception. It recently launched the Figo Aspire, a rather handsome compact sedan targeted at this aspiring class. With a bold & dynamic exterior, premium interiors and intelligent storage spaces, the Figo Aspire combines style with comfort and significantly ups the game in the mass premium segment. 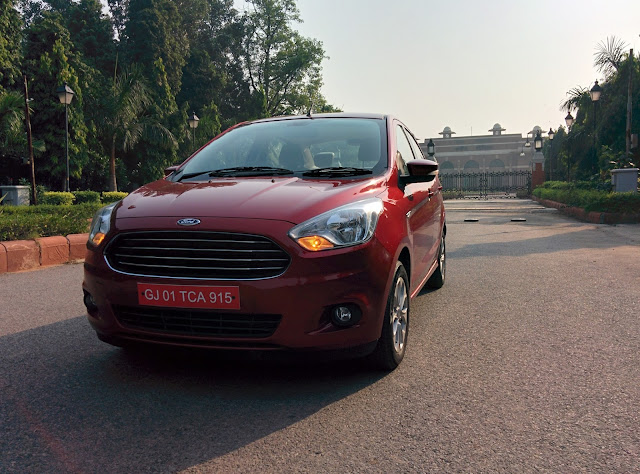 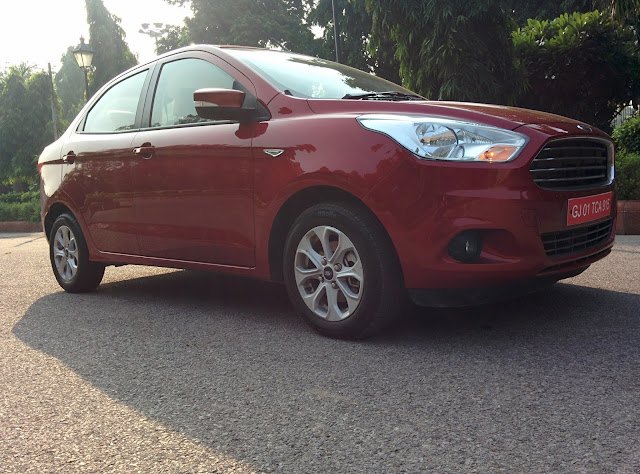 We drove the car for a week to find out how it fares, and the Figo Aspire did stand out for a few solid reasons. One has to keep in mind that this segment is more about functional benefits than anything that makes you go ‘wow’. And on that front, we were not disappointed. 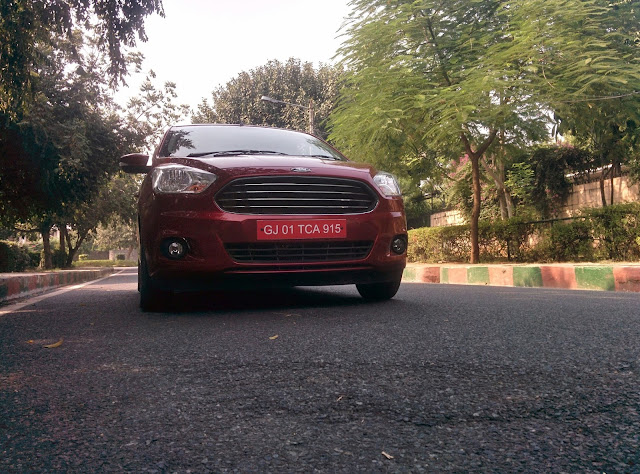 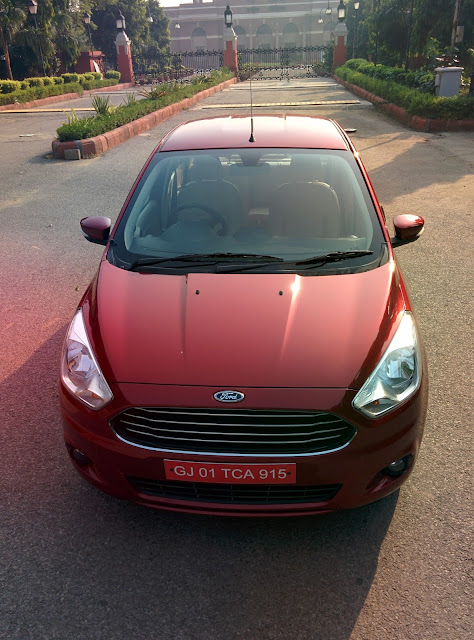 Design is one area where the Figo Aspire makes the cut. It incorporates Ford’s trademark styling in a small package, and the result is a rather good looking compact sedan. The front is particularly bold, with the large Aston Martin-like grille and wrap around headlamps. In fact, the Aspire looks like a much larger car than it actually is, when viewed from the front. The side profile features a sharp accent line running from the hood to the tail lamps. The 14″ alloy wheels look rather small, and the sub four-metre design makes the rear look stubby. But things aren’t too bad. The rear flaunts a bit of bling with a bold horizontal chrome band running across the boot which merges with the rear lamps.

Admittedly, it is difficult to design a sedan in this size, and the Figo Aspire comes as a breath of fresh air in an otherwise staid segment. It has a youthful appeal with a high style quotient and would certainly rank as one of the better looking vehicles in its segment. 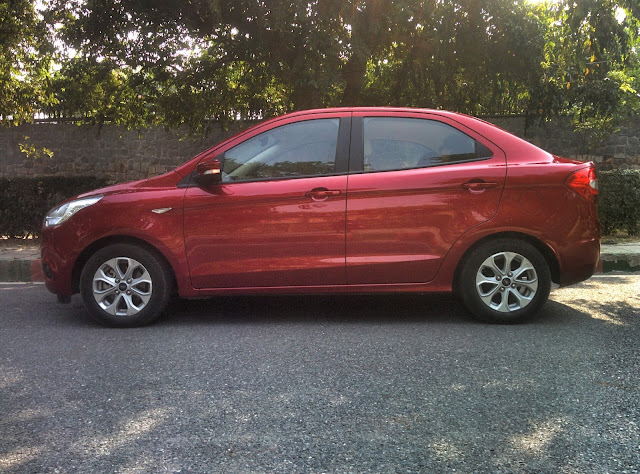 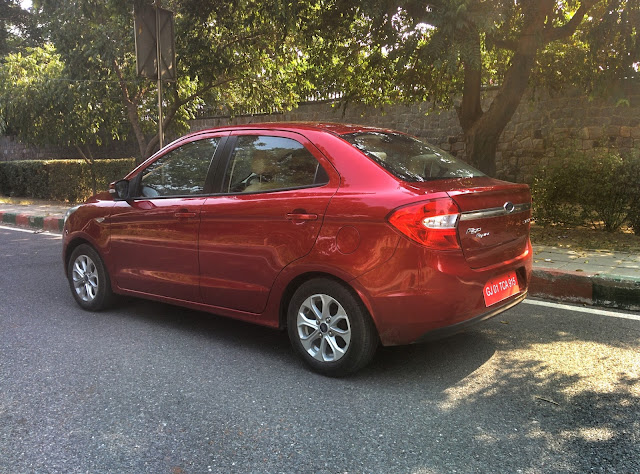 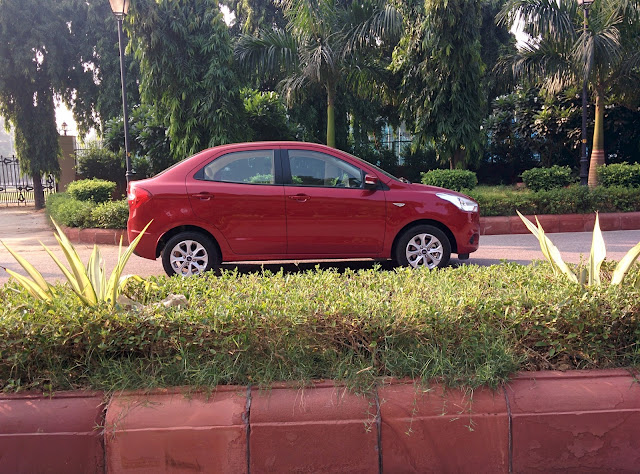 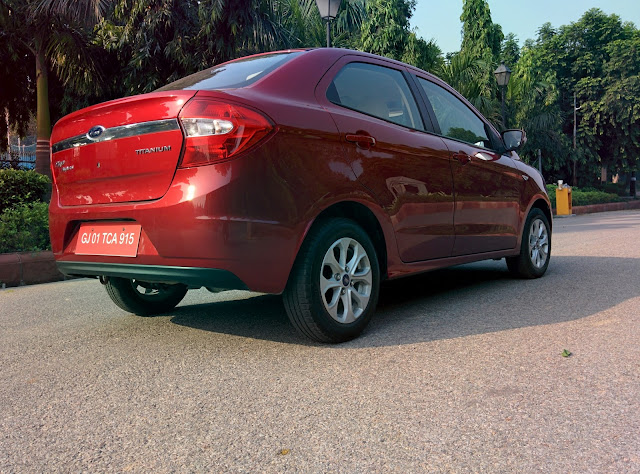 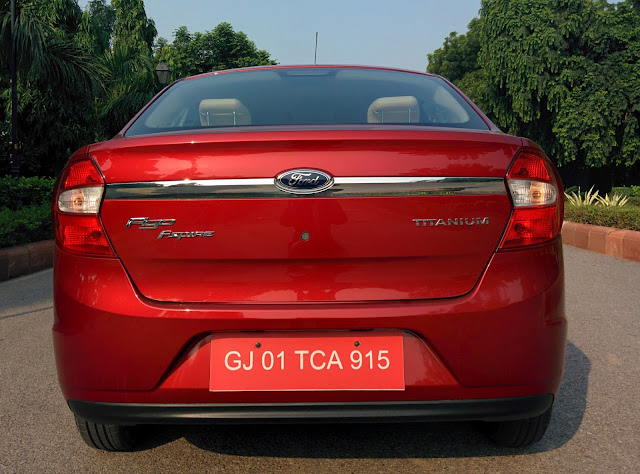 The interiors come in a pleasant beige & black combination that gives a sense of enhanced space and a sporty appeal. The dashboard features the same design as the EcoSport and although it qualifies as good design with a seamless free flowing contoured layout, the material used is expectedly not of very high standards, considering the segment. At the centre of the console is a small 4.2″ infotainment screen that takes you back to feature phone days, with a number of buttons and a display quality that can be challenging to use while driving. However, for someone having a brush with his or her first in-car infotainment experience, it is passable.

Space is ample up front, and leg room at the back is very decent for a car this size. The cabin is well insulated and comes with quite a few usable storage spaces in the front. The rear surprisingly, doesn’t have any. No cup holders in the rear central arm rest, no rear door slots for bottles or knick-knacks, nothing. The boot at 359 ltrs. is also on the smaller side, but then how much can you stuff into a sub-four meter sedan really? The boot also lacks a mechanism to open it, and one has to grab it from the bottom to lift it up. A bit odd and not convenient at all. Ideally the Ford badge on the boot should have doubled as a push button to open it. 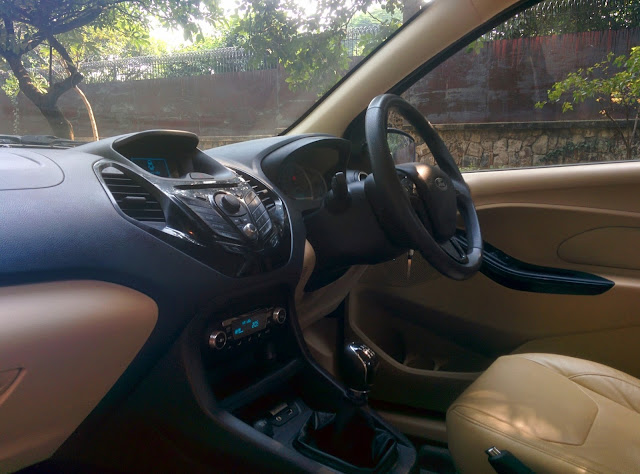 In terms of creature comforts, the Figo Aspire has a very effective climate control which cools rapidly, bluetooth connectivity with hands free calling and steering mounted audio controls. Ford has also incorporated a smartphone dock into the dashboard, and it comes with Ford’s MyKey technology, which centralizes control over settings like speed limit and infotainment volume limit. Also available is Ford’s SYNC application, which pairs your smartphone or tablet with the infotainment system. However, the Figo Aspire misses out on some trivial but handy features like passenger vanity mirror, cup holders in the rear arm rest, grab handles for passengers and central roof lights inside the cabin. These are basics which should not have been done away with. Features like keyless entry, start/stop button and reverse parking sensors are also sorely missed. 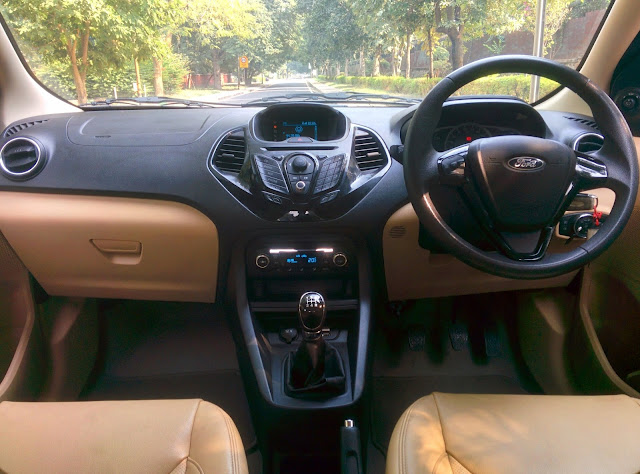 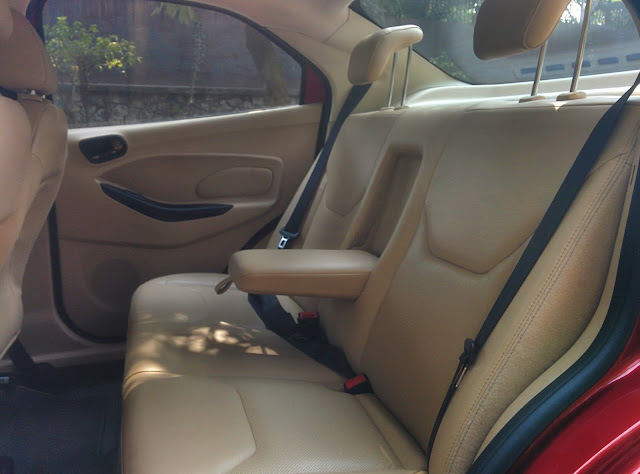 However, the big advantage that the Figo Aspire has is in its safety features. It outclasses the competition with standard driver and passenger airbags across the range and the top of the line variant gets an incredible segment-first six airbags. Also on offer are unique safety features like hill start control, which is again, a segment first.

Our test Figo Aspire was the Titanium variant, which is powered by Ford’s 1.2L petrol engine. In its petrol avatar, it produces 88PS of power and 112Nm of peak torque. There is an optional 1.5L petrol and a highly efficient 1.5L diesel as well. However, the smaller 1.2L petrol certainly holds its own among the bigger engines. It offers linear power delivery, is quick off the start line and responsive in lower gears. The engine is paired with a 5-speed manual transmission, which provides quick and precise shifts. Ford cars have always been strong contenders in the driving dynamics department, and the Figo Aspire is no exception. The suspension is on the firm side, and that makes for a sharp and taut driving experience but does not compromise on the ride quality of co passengers. The ground clearance of 174mm gives a commanding position behind the wheel, and the compact size combined with a turning radius of 4.9m adds to the fun and engaging drive experience. The absence of a dead pedal is annoying though, and the foot tends to constantly looks for it.

The fuel efficiency, or rather the lack of it, left us disappointed. We returned an average of 10.7 km/l over 3 days as against the 18.16 km/l figure quoted by Ford. Perhaps a long term review of the vehicle would throw up better and more accurate results, but we seriously doubt it would be anywhere close to the claimed figures. 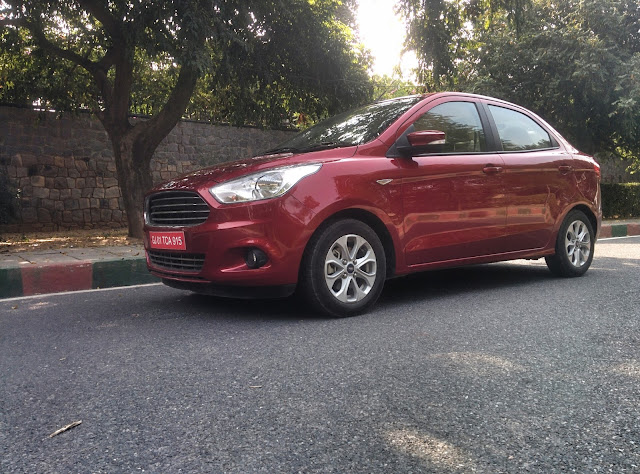 Overall, the Figo Aspire is a compelling package that offers great value for money. It is tailored for the Indian market with a wide range of engine and trim options, so you are always likely to find a variant of your choice. Prices start at a very aggressive INR 4.90 lacs and go up to INR 8.25 lacs for the top of the line diesel variant. With this one, Ford has clearly been able to strike a fine balance between performance, style, comfort and safety, and priced it attractively. This is also one of the rare compact sedans which shines in the driving dynamics department. That itself would find a lot of favour amongst the young and the restless generation, who like to get behind the wheel themselves.

The Figo Aspire is a great all rounder that is well priced, and puts Ford back in the game as an aggressive challenger in the mass segment with its other strong products like Figo and Ecosport in the portfolio.

Test drive this one if you are in the market for a compact sedan. You won’t be disappointed. In fact you would be pleasantly surprised. Because this is in many ways what other cars in the segment would aspire to be. 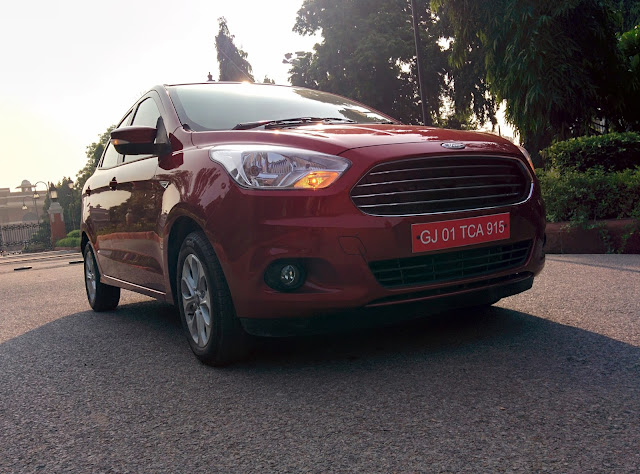 A few weeks after driving the petrol variant, we drove the Figo Aspire Diesel in the Titanium trim. While on the exterior it is no different from the 1.2L Petrol (Titanium), the real deal lies under the hood. This one is powered by a 1.5L TDCi engine, which incidentally also powers the EcoSport and Fiesta. But the small size of the Figo Aspire works to its advantage, and considerably improves the driving experience. The engine is surprisingly refined, less noisy than many of its competitors in the category, and makes the car an absolute pleasure to drive about. It kind of finds the sweet spot in terms of performance, beating expectations that one would usually have from the sub-four metre compact sedan segment.

The peppy 1.5L TDCi engine is mated with a 5-speed manual gearbox and delivers a maximum power output of 100 PS and 215 Nm of peak torque. There is a bit of hesitation before you feel the power surge when you push the pedal, but once beyond 1750 rpm it sprints like a champion. The engine is tuned to offer decent power even at lower revs and that makes it a particularly great option for both city driving or as a highway cruiser. We navigated through the congested streets of old Delhi effortlessly and then drove some bit around the Yamuna Expressway. It didn’t disappoint on either turf. 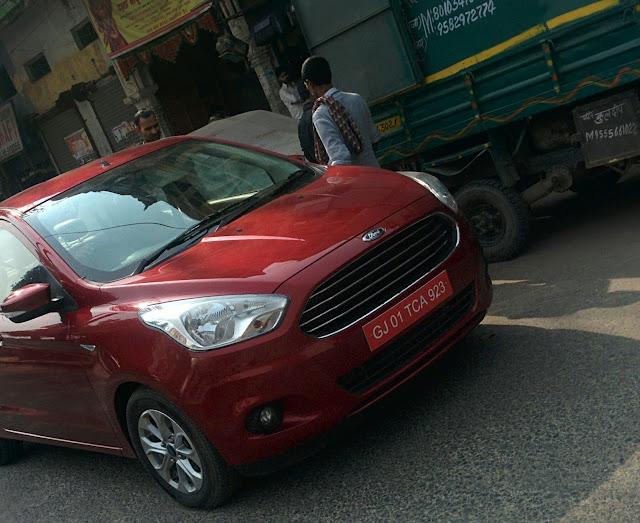 The ride quality and handling is impressive, and we returned a fuel efficiency of 14.5 km/l during our test drive over 4 days. It was quite an improvement over the petrol version, but again, nowhere close to the company claim of 25.83 km/l under ideal conditions. 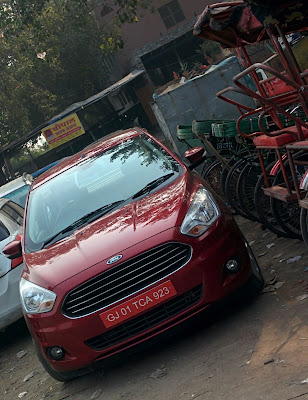 On the inside, the 1.5L TDCi Titanium (Diesel) Figo Aspire comes with dual tone fabric upholstered seats, ample space for four passengers and good cabin insulation that cut out engine noise. There are grab handles for all passengers with integrated coat hooks, vanity mirrors in the front and dual airbags for driver and front passenger. The infotainment screen is missing, and it makes way for a smart phone dock which has an Aux-In and USB port tucked inside. Place your smart phone horizontally and it becomes your infotainment/ navigation screen that displays maps, plays music & makes calls. This variant however, doesn’t have SYNC with voice control.

A complete value package that combines style, comfort, safety and takes the performance quotient a notch higher; the 1.5L TDCi Titanium (Diesel) Figo Aspire comes at an ex-showroom price (Delhi) of INR 7.70 lacs. For all that it packs in, it is priced very aggressively when compared to competitors, and that itself is a compelling enough reason to give it a second glance.