The Ciaz was launched by Maruti Suzuki about a year ago, and the stylish sedan checked quite a few boxes with its good looks, spacious cabin and premium features. The car replaced the SX4 and gave the manufacturer a fresh lease of life in the aspirational mid market C-segment, which was dominated by the likes of the Honda City and Hyundai Verna for a while. While the Ciaz has been a success from the word go and raced ahead of the Verna and the VW Vento in the segment, it has not quite managed to outnumber the City’s sales yet. But things may just change. 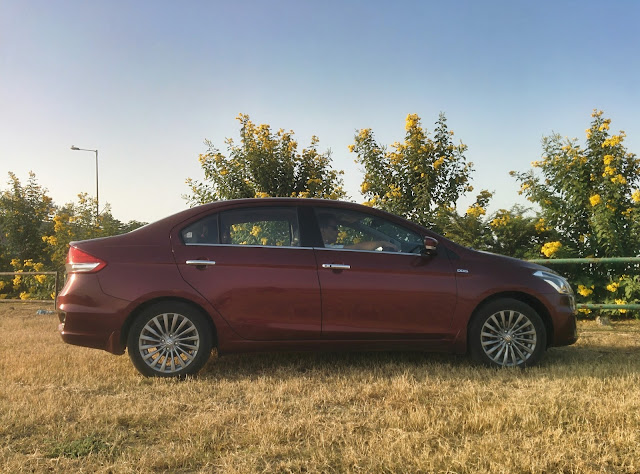 Recently, the company launched the Ciaz SHVS – a smart hybrid version of the Ciaz, and we had the vehicle with us for a week to drive about and check out the specs. The variant doesn’t look any different from the regular Ciaz except for the SHVS badging at the rear. SHVS stands for ‘Smart Hybrid Vehicle from Suzuki’ and is a kind of semi hybrid technology that equips the 1.3L DDiS diesel engine with an Integrated Starter Generator (ISG). The ISG recovers energy from deceleration, stores it in a high capacity battery and feeds the kinetic energy lost while braking back to the vehicle when required. It is a first-of-its-kind technology to be introduced in the segment and has been priced quite attractively (cheaper than the regular Ciaz) so as to encourage the average consumer to consider full hybrid/ electric vehicles in the future. The SHVS technology gets activated at the press of a Start/Stop button on the driver’s side, which automatically shuts off the engine and AC when the car comes to a halt, and restarts it when you engage the clutch. This substantially improves fuel efficiency, and for the quintessential “Kitna Deti Hai?” customer, the fact that this is the most efficient diesel in the country with a claimed mileage of over 28 km/l should be a deal clincher. 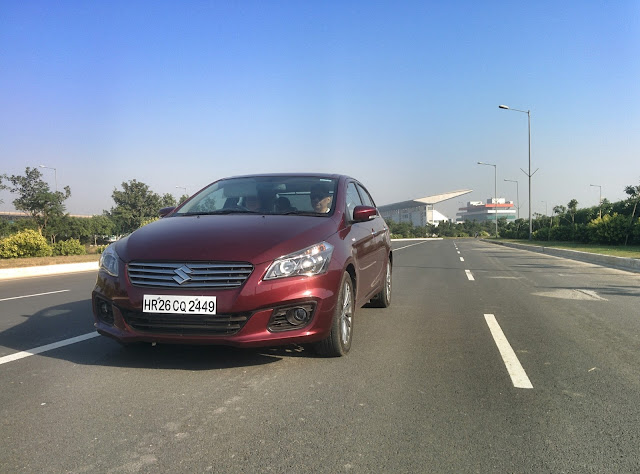 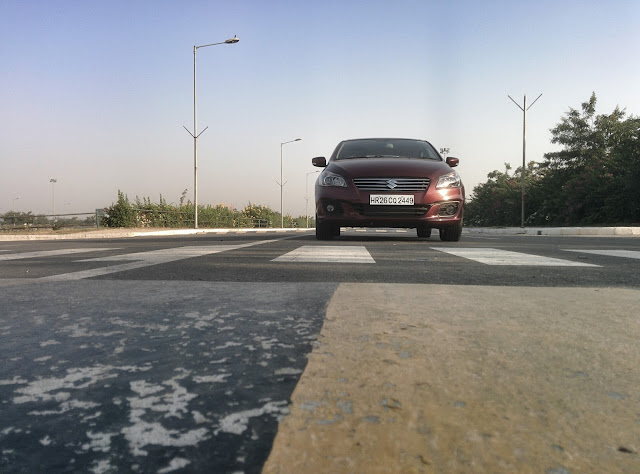 The Ciaz SHVS is as stylish as an Indo-Japanese mid size sedan can get. Nothing out of the box in terms of design & aesthetics, but nothing to complain about as well. Our test drive was the top of the line ZDi+ variant and came in a premium ‘Pearl Sangria Red’ paint finish that looked good on the proportions. Without any over-the-top elements, the Ciaz looks elegantly designed and supremely well built on the outside. It has a daunting chrome grille in the front and strong character lines along the sides that give it a well balanced look. The sweeping projector headlamps, the 16″ alloys, chrome door handles, sharp cut boot with the horizontal chrome line and the bold upright stance lend immense character and gives it an attitude of its own. 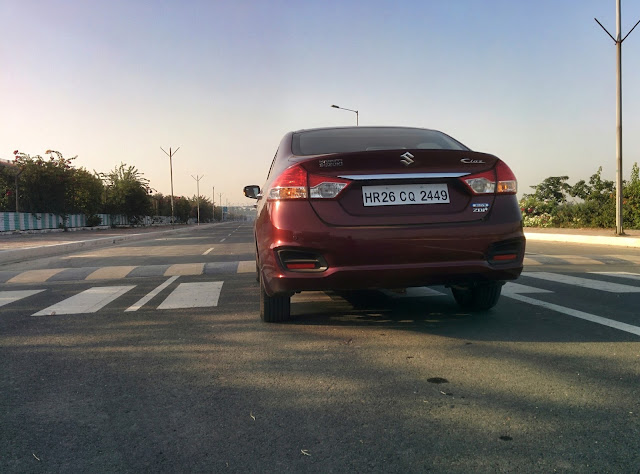 Step inside and the Ciaz SHVS has a decidedly premium feel. The cabin is uncluttered and done in beige and black, with chrome and wood inserts on the dash adding a touch of class. Closer scrutiny however reveals some compromises on the the quality of plastic, specially around the door trims. It feels evidently hollow when you knock around the dash and the doors, which also effects the quality of sound output from the 6 speaker sound system. That apart, what the Ciaz SHVS offers is lightyears ahead of the rest of Maruti Suzuki’s portfolio and the improvements continue further with the new S-Cross and Baleno that have been introduced more recently. 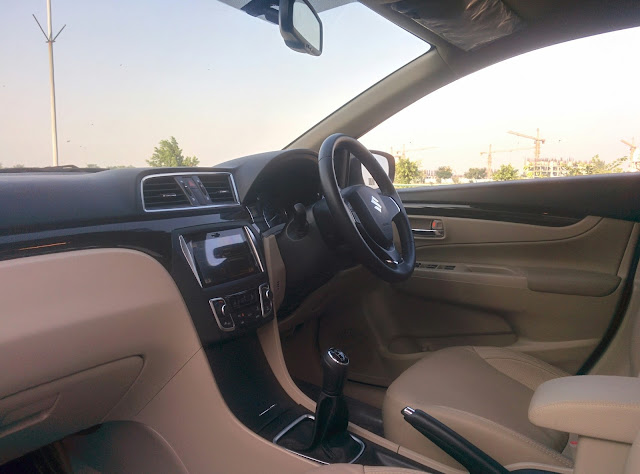 The touchscreen-centred design of the dash is streamlined and simple with all multimedia features controlled via the 7″ touchscreen. It integrates audio, allows music streaming via bluetooth, activates voice commands, makes calls, reads out messages and gives access to navigation data. It isn’t the smoothest to use and the interface looks a bit dated, but it does get the job done. The console also doubles up as a screen for the reverse parking camera. A host of other attractive features include keyless entry and start, a very effective automatic climate control, rear AC vents, electric ORVMs with auto fold, a retractable rear blind and park assist. That’s quite a load of equipment that makes this an attractive proposition for a lot of fence sitters considering an upgrade to the C-segment. 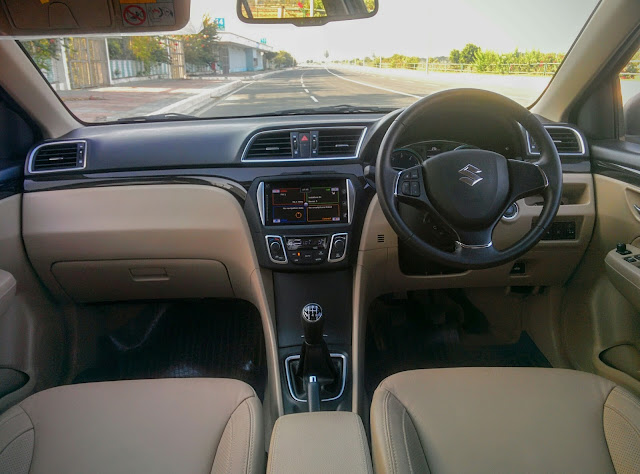 The instrument panel behind the steering wheel has a classic set of dials that throw up all the relevant information you would need. It illuminates to a refreshing cool blue and has a digital gear shift indicator additionally, that helps you eke out the last bit of efficiency from the vehicle. Quite a nifty touch. An SHVS indicator also glows intermittently to let you know when the system is at work. The steering mounted controls are standard and allow you to make calls, control volume and voice commands. What got us wondering though, was the absence of cruise control and a speed limiter. 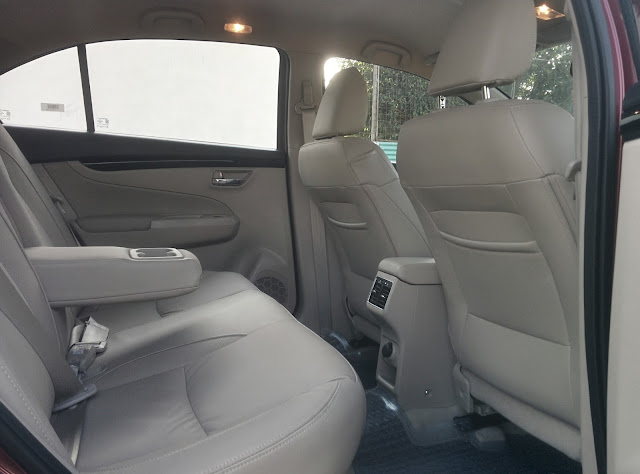 The Ciaz is 4,490 mm long, 1,730 mm wide and 1,485 mm in height, making it the biggest C-segment sedan. It has a ground clearance of 170 mm and a wheelbase of 2650 mm. The dimensions make for an extremely roomy cabin with massive elbow room and legroom both at the front and the back. Even with the front seat pushed right back, there is more than adequate leg room for the rear seat passengers and the near flat transmission tunnel ensures that three passengers are at ease. The Ciaz SHVS can undoubtedly rival several other pricier sedans on the space front.

Seat cushioning is not at its best though. The front seats are lean & firm, with stiff backrests and lack adequate support. Long journeys could therefore be a bit tedious. The high and upright seating position does give a commanding view and a sense of control, but if you are tall and well built you may find the seat height adjustments a bit inadequate. The dead panel is there, but yet not there. It is deep down on the floor, and why it exists in the manner it does, is questionable. Raising its height would make it infinitely more comfortable for the driver to rest his left foot at a convenient angle.

There are plenty of storage options around the cabin – twin cupholders in the front and rear, a deep console box in the front with 12V charging, USB and AUX sockets, a utility box under the central armrest in the front, deep door slots that can hold 1.0L bottles with ease, an overhead sunglass holder, and more. The 510 ltr boot is easy to access and feels quite adequate for a car this size. 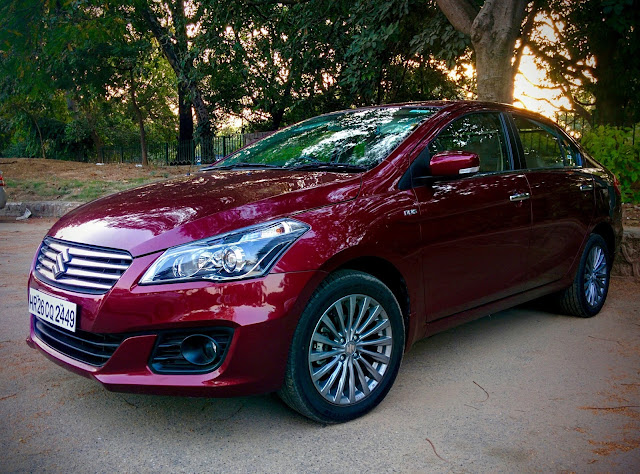 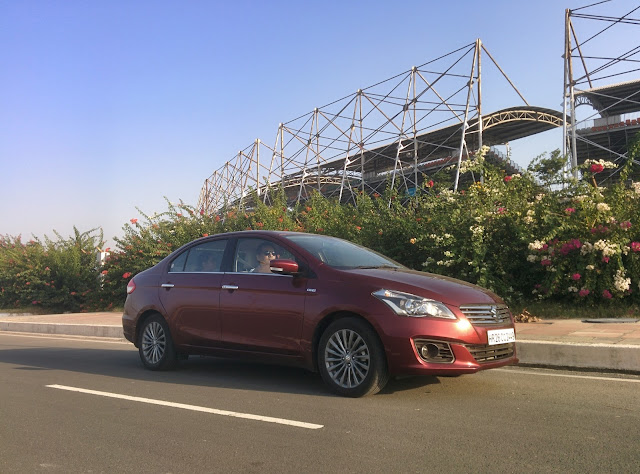 Our test vehicle came with the 1.3L DDiS 200 diesel engine. The smart hybrid option is only available in diesel. Buyers do have a petrol alternative and can opt for the K 14B VVT Petrol if they want a less noisy car and a smoother drive. This one is a noisy diesel, but thankfully cabin insulation is good. It is only at high speeds that you feel slightly bothered by both engine and road noise. The diesel is mated to the 5-speed manual transmission and develops 90 PS of power, and the ECU has been tuned to enhance throttle response and overall feel of the engine. 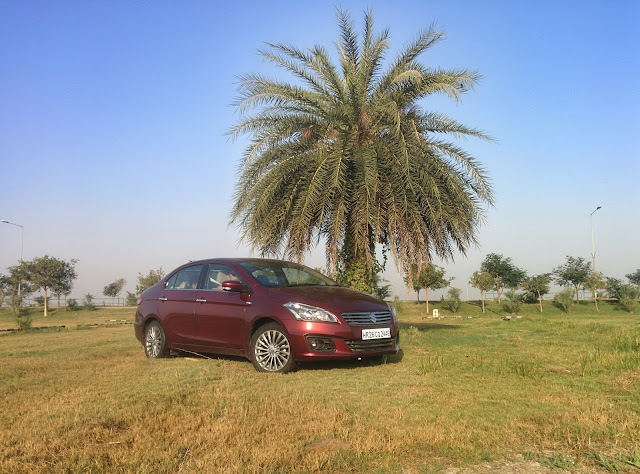 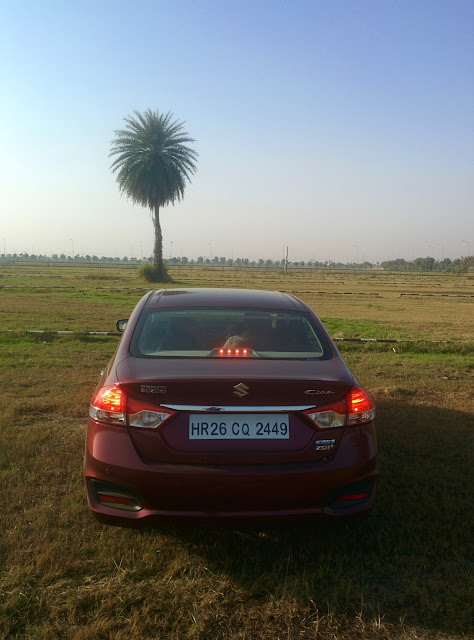 While the Ciaz SHVS is certainly not a driver’s car, it will meet your urban city driving expectations if you are not too demanding behind the wheels. Neither the engine nor the steering are very responsive in terms of driving dynamics. It lacks punch at lower revs and the turbo takes its time to kick in, so don’t expect sharp overtaking to be effortless. The suspension is soft and the ride quality is impressive, but body roll is evident around bends. And while driving at high speeds (beyond 120 km/h) steering vibration will keep you moving and shaking, with the ride quality transforming to light and bouncy, rather than feeling planted.

The good news though is on the safety front. Driver side airbag comes as standard across all variants and from the second trim onwards, it gets dual airbags, anti-lock braking system (ABS), and electronic brake-force distribution (EBD) system.

The Ciaz has always been exceptional in terms of fuel efficiency, but the hybrid system takes matter further, making it even more frugal. The regular diesel Ciaz had a claimed efficiency of 26.21 km/l. With the SHVS technology, the figure goes up to a whopping 28.09 km/l. During our test, we got an impressive average of 18 km/l, which is sure to improve with time, under normal drive conditions. 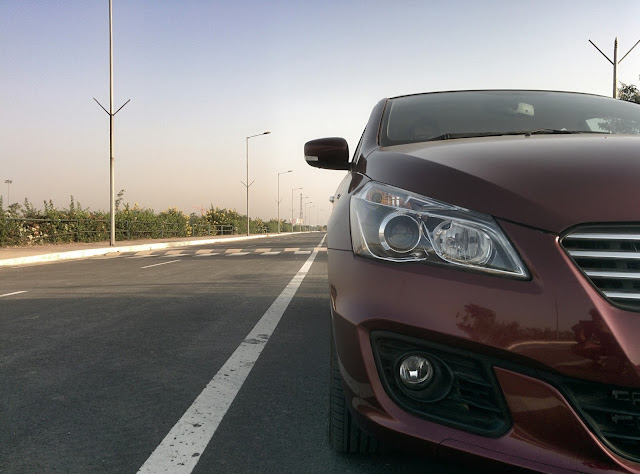 With the smart hybrid upgrade, Maruti Suzuki has stepped up the game in the segment, and the move should keep consumer interest in the brand alive and prolong its life cycle. The benefit from the FAME scheme announced by the Government of India (that incentivizes the production and faster adoption of hybrid and EV vehicles in the country) has also been passed on partially to the customer, making the SHVS version cheaper than its non-hybrid version. The entry level VDi variant starts at INR 8,23,000, while the VDi (O) is priced at INR 8,37,500, the VDi+ is for INR 8,81,500, the ZDi is for INR 9,52,500 and the range topping ZDi+ is priced at INR 10,17,500.

The Ciaz SHVS is undoubtedly an exceptional package and excellent value for money. Its build quality, equipment list and aggressive pricing should have Honda worried and make the fight at the top of the C-segment a lot more intense in the months to come. And if you are considering a mid range premium sedan, you cannot afford not to take a deep look at the Ciaz SHVS. Chances are you would be hooked by the style, pizzaz & all that jazz.