Circa 2006. Chevrolet launched a sporty version of its much loved Optra in India. It was called the Optra SRV (Sports Recreational Vehicle) and was a rather handsome hatch. In fact, many still feel it was the best looking premium hatch to hit the Indian roads. The SRV was a reasonably good product for its time too. A front wheel drive with a 1.6 ltr petrol engine, it had a 5 speed manual gear box and spacious dimensions of 4295 mm (L) x 1772 mm (W) x 1445 mm (H). The ground clearance was 185 mm and it had a wheelbase of 2600 mm.

The Optra SRV delivered a maximum power of 101bhp@5800rpm and 140Nm@4500rpm of torque. The 0-100 sprint took 12.9 seconds and fuel efficiency stood at 11.5 km/l. It was priced at about INR 6.8 lacs+ and aimed at young buyers. What the car tried to do was attempt to create a niche segment, where it failed miserably. It was considered too expensive for a hatch, and at that price point India clearly preferred a three box car. For an emerging consuming class those days, the boot was an important attachment that made a ‘big car’ statement on the road.

Cut to August 2015. Maruti Suzuki launches the S-Cross. Huge anticipation precedes the launch, as it marks the company’s first foray into the crossover segment – a category that has been the flavor of the market for the last couple of years. It also marks Maruti’s third attempt to nudge into the premium segment (and perhaps the last), after the rather disastrous Grand Vitara and Kizashi.

There is a lot riding on the S-Cross, which is a vehicle built on a completely new platform. Not just the product, but an entire retail experience has been built around it in the form of NEXA – a premium set of showrooms that will exclusively retail the vehicle.

The S-Cross is a front wheel drive with two powertrain options – the 1.3 ltr DDiS 200 and the 1.6 ltr DDiS 320 diesel engine. Research indicated that diesel is a preferred option in the crossover segment, therefore the company decided to junk the petrol option completely. Which means a fair set of customers would give this a miss.

Now does that sound all too familiar? Well, quite. If you compare it with the Optra SRV.

The S-Cross is priced between INR 8.34 – 13.74 lacs. While the price bracket puts it in direct competition with the Ford EcoSport, Renault Duster, Nissan Terrano, Mahindra Scorpio, XUV 500 and the Hyundai Creta, as a product the S-Cross is anything but an SUV crossover. It is more sedan than SUV and therefore a head on comparison with the rest is unfair. It is more of a cross between a sedan and an estate; something that the Etios Cross, Cross Polo and the Hyundai i20 Active would perhaps want to be, when they grow up.

The comparison with the erstwhile Optra SRV however, is hard to ignore. The pictures above prove the uncanny resemblance between the two. And this is a fact that every review in town seems to have missed. Both vehicles share the same dimensions, wheelbase, and body style. If the S-Cross had a petrol variant, it would be the decade old Optra SRV. 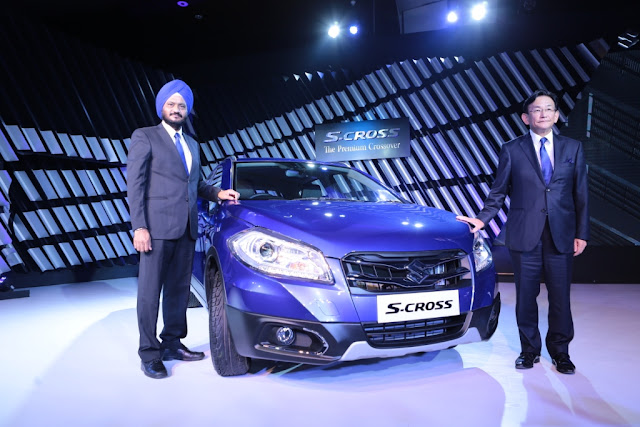 So what’s new with the S-Cross? In terms of styling, it lacks any kind of dramatic flair. Although it is built on a completely new platform, the design is pretty much staple Maruti. The SX4-like front balances out well with the rear, it looks proportionate, but there is hardly an evocative design element that makes the vehicle stand out. The skid plates, roof rails and enhanced wheel arches do offer some rugged appeal, but they don’t really ensure a second glance. There are plenty of faux cladded vehicles on the roads these days. 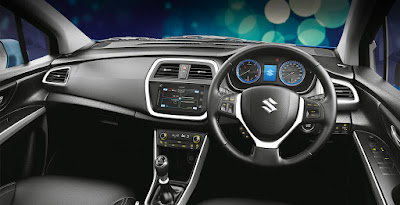 The interior is where the S-Cross scores. It feels premium in all black, with quality trims and soft touch plastic on the dashboard. Overall material used are of considerably better quality as compared to past Maruti offerings. The cabin is uncluttered and the dark leather seats look good. The dashboard elements follow a rather conservative design layout, without any free flowing fluidic flair. Cabin space is reasonable for five passengers and there are several useful storage options inside. The infotainment system UI is flat and one dimensional, and looks a bit dated. Much like the first generation smart phones. It does offer navigation and bluetooth compatibility though, all of which can be controlled through the steering mounted controls.

The S-Cross comes with standard dual airbags even at the entry level and that is applaud worthy. It has all wheel disc brakes with ABS, and the rear parking camera features in a few of the top variants. 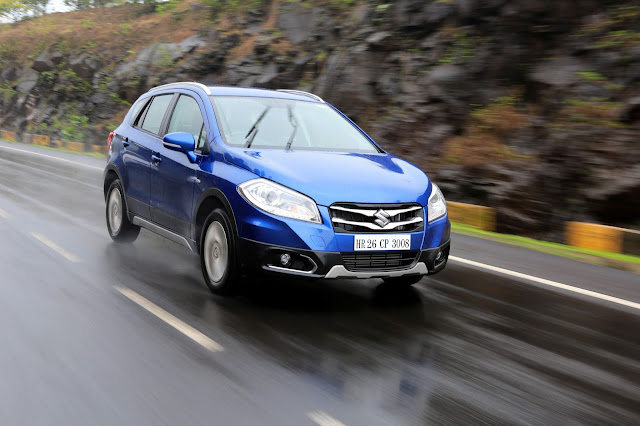 So how does one sum up the S-Cross? For those who remember the Chevy Optra SRV, this isn’t a huge leap in product development in 10 years. While the S-Cross delivers well on most fronts, it lacks the X-factor. It misses the sweet spot. The orchestra is there, but the symphony is missing.

Maruti is looking to be attractive to a new audience with the NEXA+S-Cross combination. Despite the ‘premium crossover’ tag, sophisticated attitude and marketing pizzaz, it may find that an uphill task. The car (particularly the lower version) is more likely to find favor amongst the conservative buyer looking to upgrade from a hatch or a compact sedan to something new. Most likely, this would be an existing Maruti customer, or the next generation from a family that owns one.

The pricing strategy is also not exactly likely to get customers flocking at NEXA showrooms. Maruti needs to take a hard look at both positioning and pricing, which does seem a bit muddled up. They may have unwittingly launched India’s most expensive hatchback and are looking for an audience where there may be none. Targeting the young, jet setting achiever who appreciates the good things in life sounds good on paper, but the question is, “Is he/ she listening?”. This set of customer has many options to explore and may continue to look elsewhere, in the absence of a strong compelling hook. And the ‘big car’ statement on the road is still important for the Indian buyer today – be it with an additional boot or a SUV like size. And the S-Cross has neither.

Having said that, the S-Cross will find an audience in the short run, but not where Maruti imagined. In the long run it may need to tweak both product and price to remain relevant. It is also unlikely that one vehicle out of a large portfolio will help build a premium equity for Maruti too soon. They now need to quickly add more premium vehicles into the NEXA channel and prepare for a long battle of perceptions ahead.