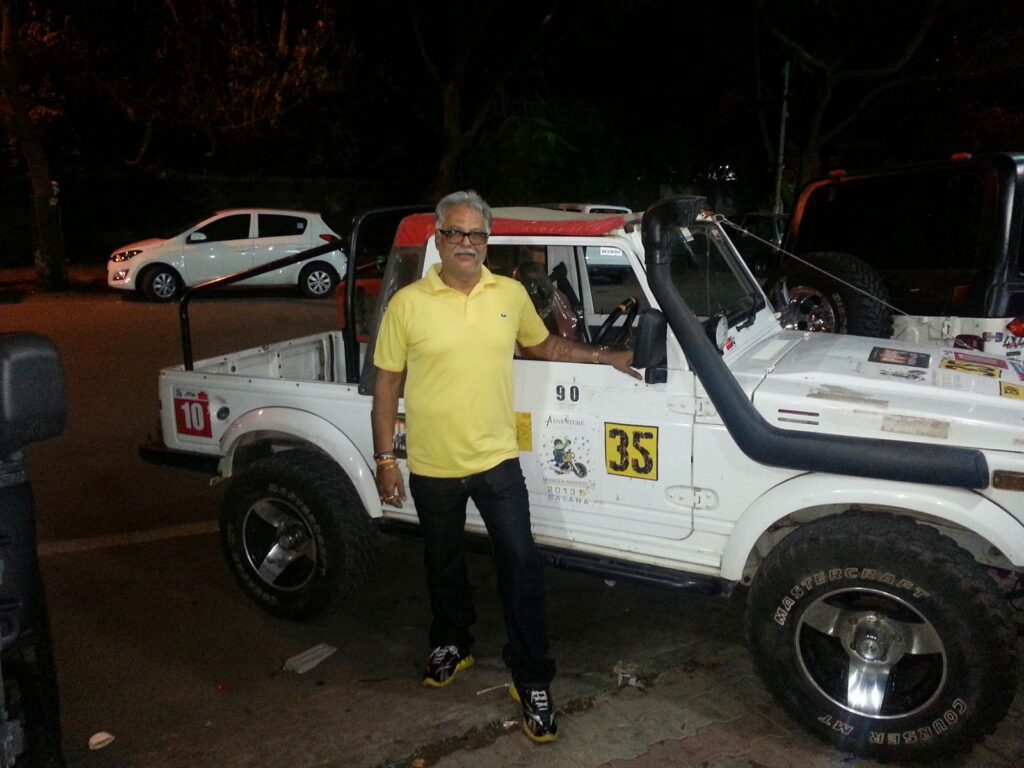 The first edition of the Rainforest Challenge (RFC) India will be held in Goa from August 8-14. With participants signing up from all over India and the world, Pune has its own competing heroes. Representing Pune at the event this year are 58 year old Ramessh Belaaram Ahuja and 32 year old Daulatram Chaudhary.

RFC is counted among the top 10 toughest motor races in the world. Adapted from the mother event that was launched in Malaysia in 1997, RFC India 2014 will see off-road enthusiasts and 4×4 vehicle owners negotiate a 250km stretch from North to South Goa, battling the forces of nature and the blinding rain. As they manoeuvre through the slush in their modified 4×4 vehicles and try to make the best time in 30 Special Stages (SS) lined throughout the course; their mental and physical capabilities will be pushed to the limits.

A wine shop owner in GanjPeth, Pune; Ramessh Ahuja’s alliance with off-roading is very recent. Owing to the lack of a national level platform for off-road motorsport events in India, Ramessh would take his Maruti Suzuki Gypsy 4×4 and go on long drives. A couple of years ago he became a member of the Pune Pathfinders 4×4 P2 Team who have helped and supported him turn his interest into a passion. Since then Ramessh has participated in nine events– the Gokak Challenge, Karnataka and other locally organised ones all over Maharashtra. His club members told him about RFC International, which got him hooked. When the event came to India, he couldn’t let an opportunity to participate slip. His age hasn’t deterred him from participating in this extreme off-road event.

RFC is a test of one’s mental and physical abilities and isn’t a challenge for the weak-hearted. With the course being designed by experts from RFC International and most of his competitors being younger and stronger, Ramessh has been training very hard, spending most of his free time working on vehicle modifications and bulking up physically for the challenge. “As I started to explore the world of off-roading two years ago, I got drawn deeper into it. My tryst with off-road motor sports started quite late in life which makes me more determined to explore all that it has to offer. At RFC India, I will be up against stronger opponents, but I want to participate in an event of this stature. My aim is not to win the trophy. My total focus is only on completing the 30 Special Stages successfully,” he said.

Daulatram Chaudhary on the other hand is competing to win. A trader by profession, he had developed a keen interest in motorsport events as a child. He had participated in the 2012 and 2013 editions of the Mahindra Great Escape. This proud owner of a Toyota Land Cruiser FJ 40 has religiously followed all the off-road action on the RFC International scene for the past 5 years. When asked about how preparations were underway for the event, he said, “I have been working on my car since February; modifying it to suit the RFC India specifications.” He added that he spends up to 3 hours daily on modification work for his car. He said that RFC India is a platform for him to understand how international events take place and what preparations go into participating in one. “I am confident that I will win RFC India and will go to Malaysia for the mother event,” he said.

Spread over six days, RFC India 2014 will be divided into four stages – the Prologue, the Predator, the Terminator and the Twilight Zone. The Prologue stage is proposed to be held close to town where competitors can interact with viewers. In the Predator and Terminator stages, competitors will have to fend for themselves while traversing the rugged terrain.The event will culminate with the Twilight Zone which will be an overnight drive through uncharted territory. The winning entry at RFC India will get a direct entry into the mother event that will be held in Malaysia late this year. Ashish Gupta, the Founder and Director of Cougar Motorsport Pvt. Ltd., which has brought this international off-road event to India said, “We have participants of all ages participating in the launch edition of RFC India. It is very inspiring to see people from all age groups come out and participate in an international event of this stature.”

The entry fee for Competitors and Touring Vehicles for the Rainforest Challenge (RFC) India is INR 75,000 and INR 10,000 respectively. Foreign entries will be charged at USD 2,500 and USD 333 respectively. Participation forms, event schedule, rules and regulations and all other details of the event are available at www.rfcindia.in.