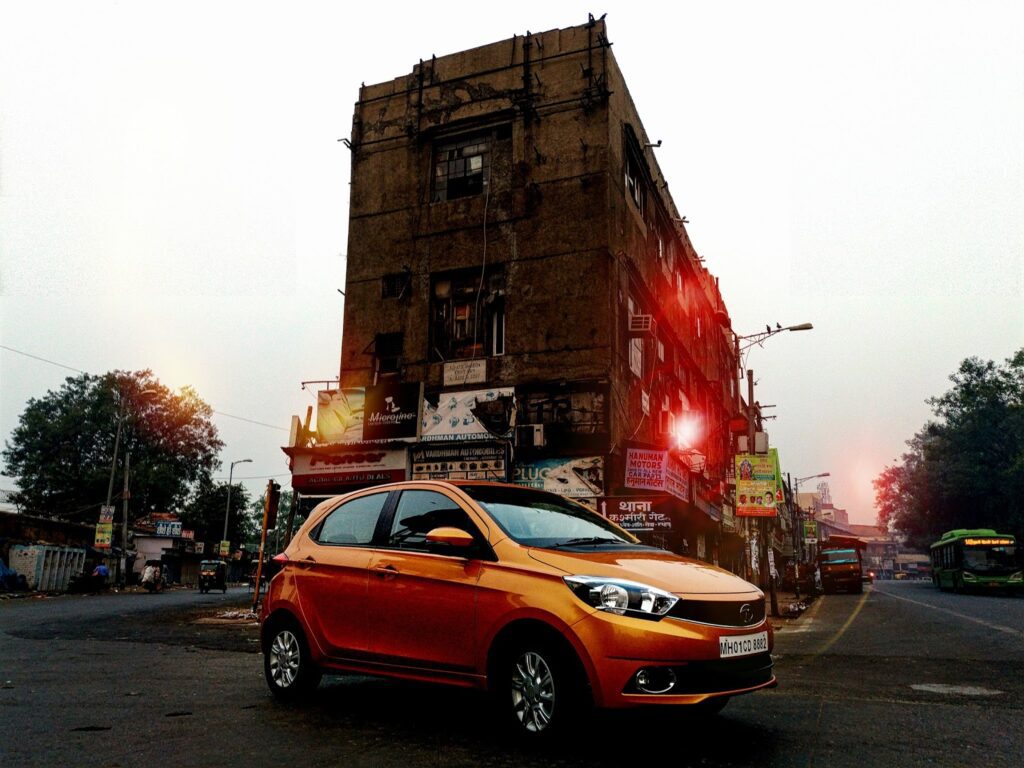 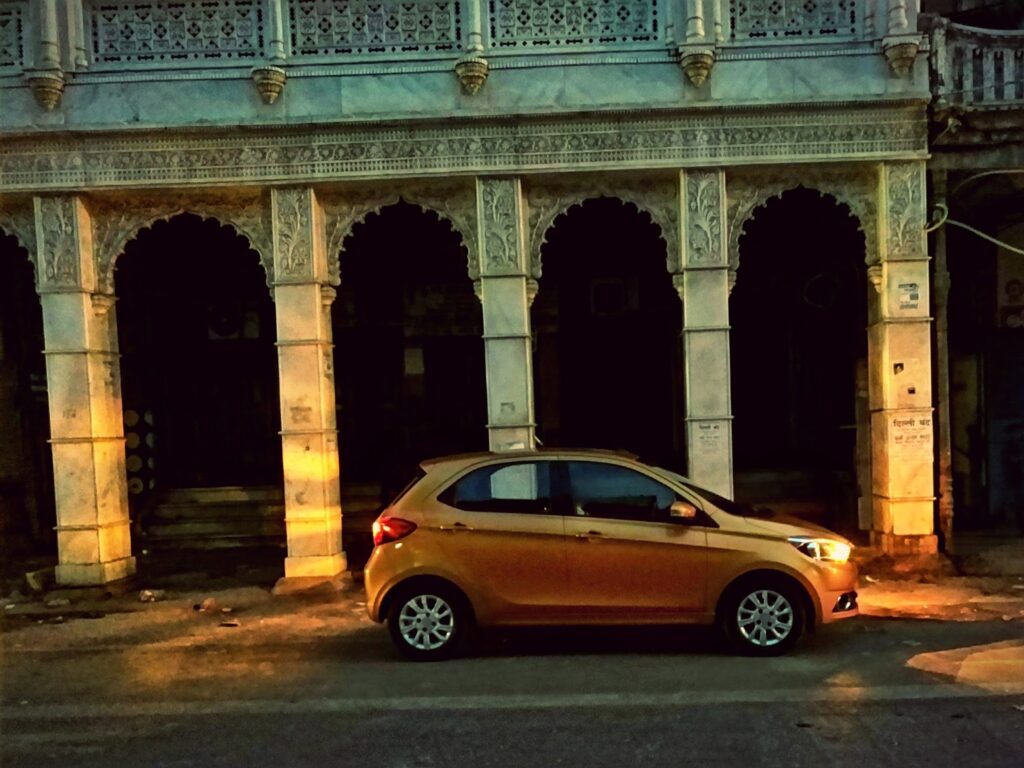 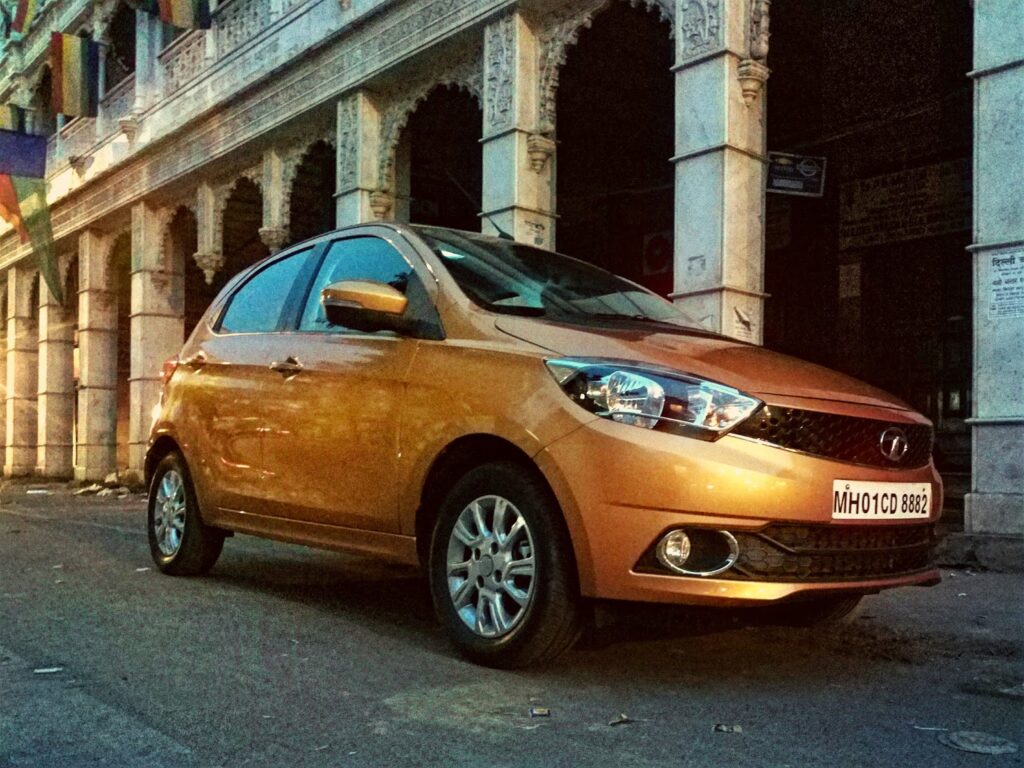 Tata Tiago XZ 1.2 Petrol in the streets of Old Delhi 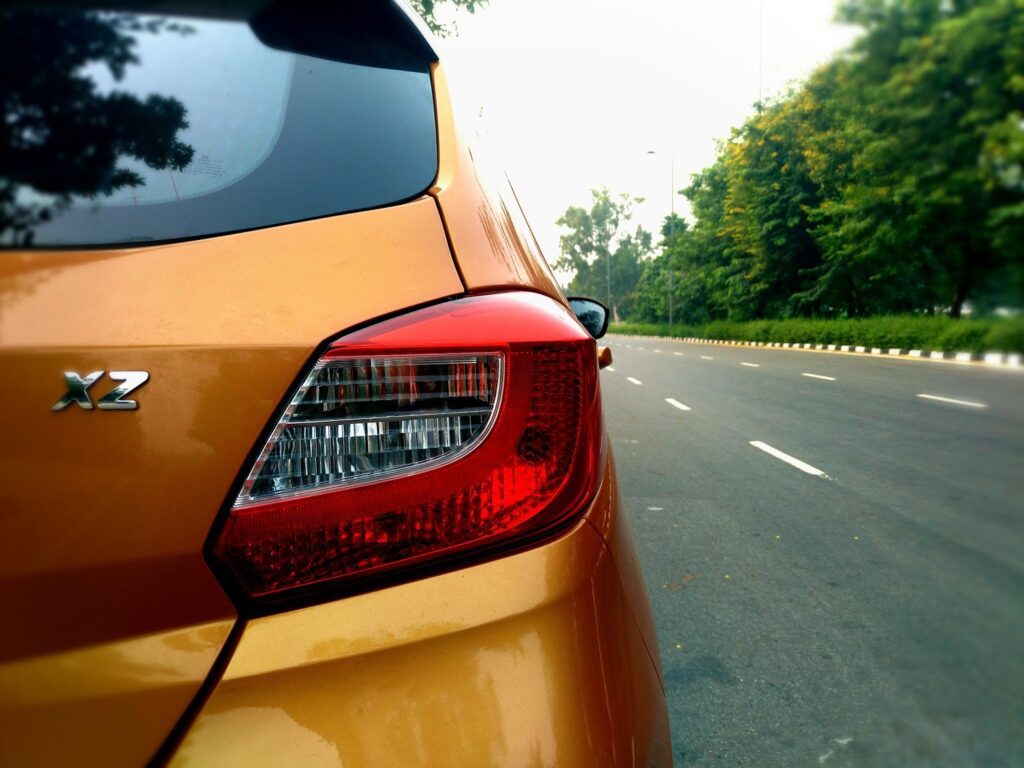 India’s automotive history has been a relatively short one. Iconic cars have been far and between, with the Ambassador, Maruti 800 and the Gypsy probably making the cut. And perhaps to a lesser extent the Tata Nano. Then there are the likes of Hyundai Santro and Tata Indica. Small cars that have enjoyed an extended run well beyond their expiry date to remain widely popular and instantly recognizable on the roads.

Much of the action in the Indian automobile industry has been in the compact hatchback segment. Tata Motors stepped into the game a bit late with the Indica in 1998 – it’s first indigenous passenger car which became an instant success thanks to the introduction of a diesel option in a small car and its generous cabin space. Indica eventually went on to sell over a million units for Tata, who continued their small car experiments with the revolutionary Nano in 2009 and the Bolt in 2014. While the former has had a mixed run, the latter failed to make much of an impression.

In April 2016, Tata introduced the Tiago to the world. A brand new compact hatchback built on a brand new platform, and positioned between Nano and Bolt in its portfolio. While Maruti Suzuki remains the dominant player in the segment with strong offerings like the Alto 800, WagonR and Celerio, Hyundai’s Grand i10 remains a worthy challenger. And Honda Brio and Nissan Micra complete the tail. Not much has changed in the pecking order for years but lately things look somewhat different with two strong products in the market: the Renault Kwid and Tata Tiago. Both have disrupted the status quo with well styled small cars that are loaded with premium features and priced aggressively.

For Tata, Tiago’s success is important. And in a bid to make a dent in an industry where it has been languishing at the bottom for far too long, the company has come out all guns blazing.

The Tiago was in the news even before its launch due to a branding crisis that emerged out of the global Zika virus outbreak. The car was earlier called Zica, and the company announced its decision to rebrand it at the Delhi Auto Expo 2016. It was a brilliant move that turned an unforeseen branding disaster into a smart brand engagement activity. A global naming contest was announced through social media and customers were given a chance to come up with the new name. The move paid off handsomely and created phenomenal pre launch buzz, and thus the Tiago was born.

Simultaneously, the company also launched a global brand campaign for their passenger cars with football star Lionel Messi as the brand ambassador. It was well integrated with the Tiago launch and showed Messi zipping around in the vehicle. The entire exercise has somewhat lifted Tata’s waning brand image already, and the positive customer feedback of the Tiago seems to have bought them strongly back into the game.

We spent a week with the Tata Tiago XZ 1.2 Petrol variant and were honestly impressed from the word go. It seemed like Tata had finally got it right with this one – a truly global car in every sense which is undoubtedly their best product till date. Be it styling, fit & finish, features or performance, the Tiago makes a strong impression.

The exterior styling is mint fresh and thankfully, there is no Indica hangover. There is nothing extraordinary or radical, but just a smart, confident and agile vibe. Proportions are also spot on. The front grille which connects the wrap-around headlamps is finished in glossy black and features an interesting honeycomb design. The Tiago has sharp and strong lines, and we especially liked the shoulder line running from the A-pillar to the C-pillar, which gives it a nice stance when viewed from the side. At the back, the two-tone bumper and built-in spoiler give it a look reminiscent of a hot hatch. Overall, the sharp lines and low stance gives the Tiago a purposeful and ready-to-go attitude. It is solidly built, with a strong overall presence that is accentuated by 14″ alloys.

The Tiago’s cabin is super sporty. It is finished in a two-tone grey and textured black combination, and the dashboard looks quite upmarket for a car at this price point. The quality of trims are quite good (barring the grey plastic bit between the front seats) and there are no hollow panels when you tap on surfaces. The colour coordinated AC vents on the orange and red paint options is a stylish addition. Tata has also given the option to customise the paint on a total of seven panels across the cabin, giving the Tiago customisation options never seen before in a small hatchback in India.

The full fabric front seats are well padded and contoured, offering excellent support and comfort. They are considerably slimmer and less voluminous too, and that makes for additional leg room at the back. There is ample head room, elbow room and leg room in the front and rear to seat four adults comfortably without feeling claustrophobic. Thanks to some smart utilization of space, there are several useful storage options around the cabin, including two cup holders, a roomy glove box and a bag hook for the front passenger. Having said that, seat back pockets and a sunglass holder are conspicuous by their absence.

The 242 ltr. boot is adequate, and can be accessed with the physical key or the lever on the driver’s side. There is no remote access. Additional space can be had by folding the rear bench, but it doesn’t come with a 60:40 split option. Also missing is a central lock button inside. While there is an auto lock function, one has to manually pull the door lock knobs up the old fashioned way, if you need to get out. Or use the remote key. 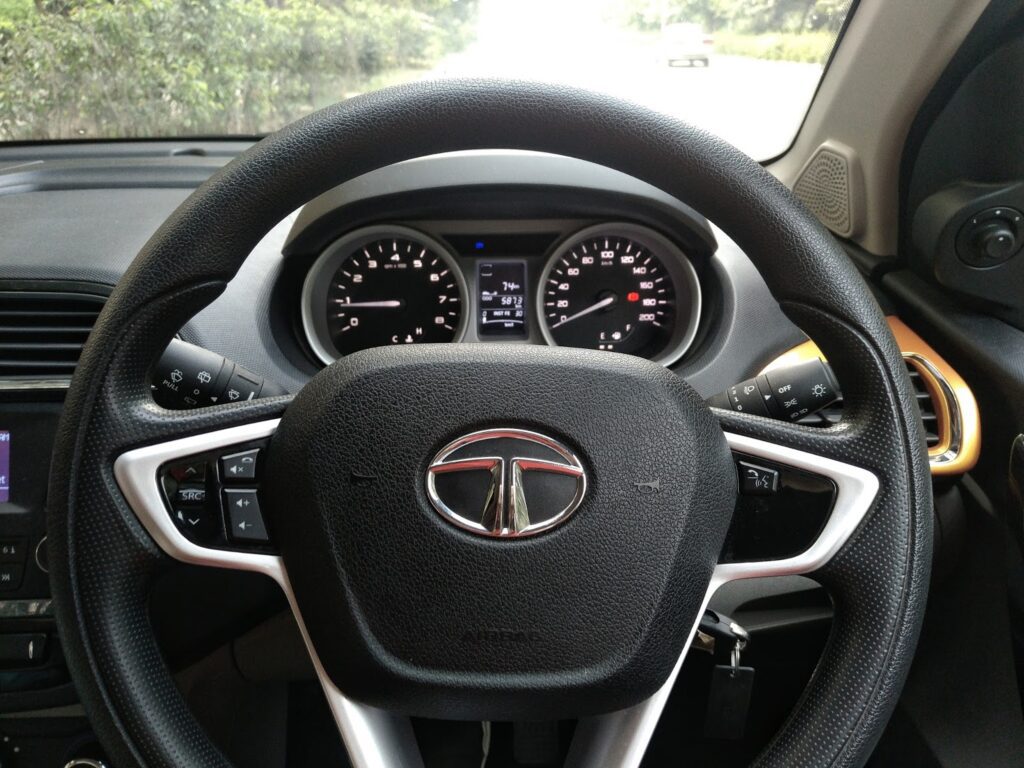 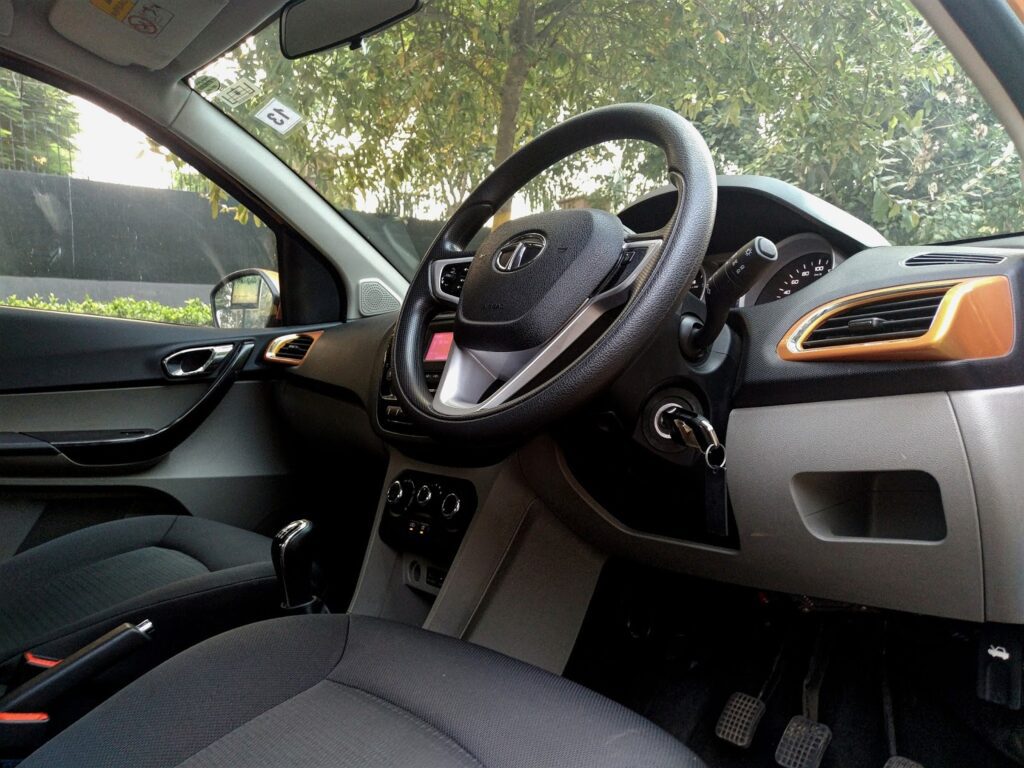 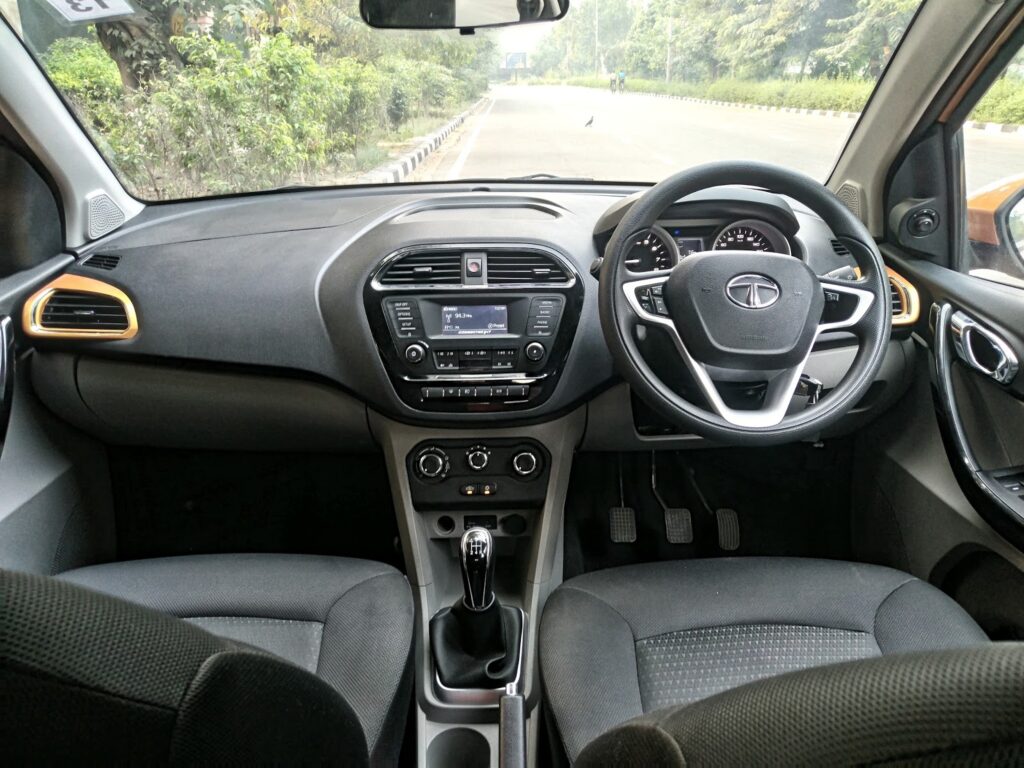 The Tiago feature list is functional and covers most of the essentials. The infotainment system comes with radio, external media, phone, bluetooth, USB and aux support. There is a jukebox app and a navigation app too, which you need to sync through your smartphone, but we didn’t get down to testing it. The reverse sensors come with a warning display on the screen which is quite useful. The steering mounted controls for radio, music, volume controls and phone makes things quite breezy and the 8 speaker Harman sound system is pretty impressive. The multimedia display screen is small with dated graphics and a bit of lag. The air conditioning (there is no climate control) was surprisingly ineffective even when set at high, but we reckon it could be a vehicle specific issue. There are electronically adjustable ORVMs (not auto folding) and a smart instrument cluster that displays a digital clock, dual tripmeter, instant fuel consumption, average fuel consumption, distance to empty, and a gear shift indicator. It also has a provision to customize the illumination intensity.

Under the hood, the Tiago comes with two brand new engines options, the Revotron petrol and the Revotorq diesel. Our test car came with the all aluminium 1.2L 3-cylinder petrol motor, which produces 85 PS of power and 114 Nm of torque. While you are not winning any races with this kind of power, the engine is high revving and peppy, which makes for a fun driving experience. It is not as zippy as it looks, but is a pleasurable drive nevertheless. The small steering and the nifty 5-speed manual gearbox make for a sporty behind the wheel experience. There isn’t enough steering feedback though, but it is easy to use. There are two drive modes: City (the default mode) and Eco which gives you the option to switch to a fuel saving mode. The Tiago has a wide power band and demonstrates great in-city capabilities, both in stop & go traffic as well as in open stretches. It feels a tad heavy at take off but things improve thereafter. In general, things feel solid and stable even at high speeds and it manages to strike a nice balance with its nippy handling, excellent manoeuvrability and superior ride quality that evens out the roughs with ease. No compromise whatsoever.

The levels of vibration however are quite astonishing. The gear knob shakes furiously at idle. Noise insulation inside the cabin isn’t great either, with a lot of engine noise creeping in.

Safety features in the Tiago include dual airbags, EBD and ABS with corner stability control.

On the efficiency front, we averaged 13.2 km/l while driving within the city, shuffling between City and Eco modes. The figure isn’t too great and nowhere close to the claimed efficiency of 23.84 km/l.

Overall, the Tata Tiago comes across as a solid package that has it all – style, comfort, performance and price. The petrol variants start at INR 3.20 lacs and tops out at INR 4.89 lacs for the XZ Petrol we drove. The diesel variants on the other hand are priced between INR 3.94 lacs and INR 5.68 lacs.

For a compact hatch, what more could you ask for? 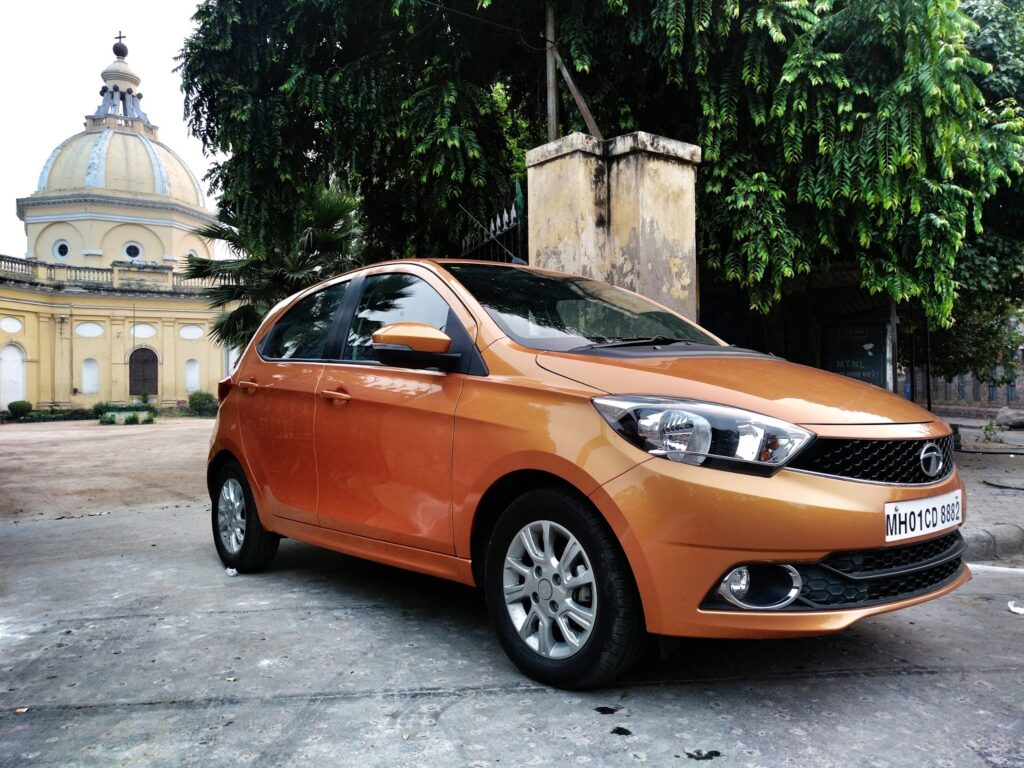 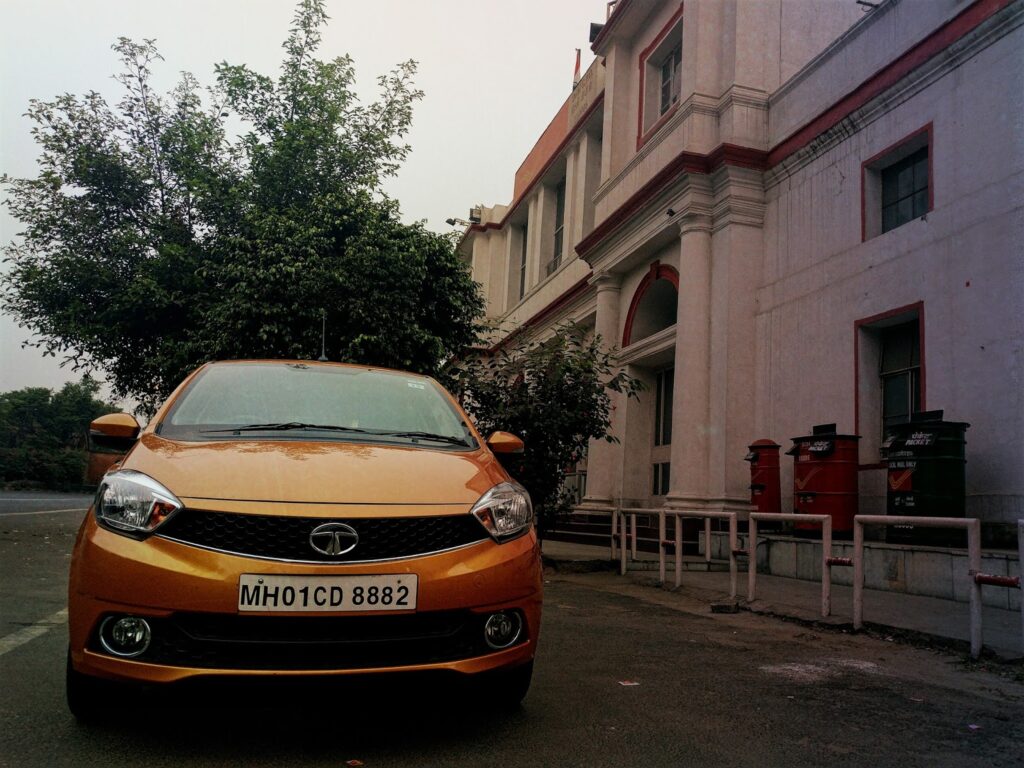 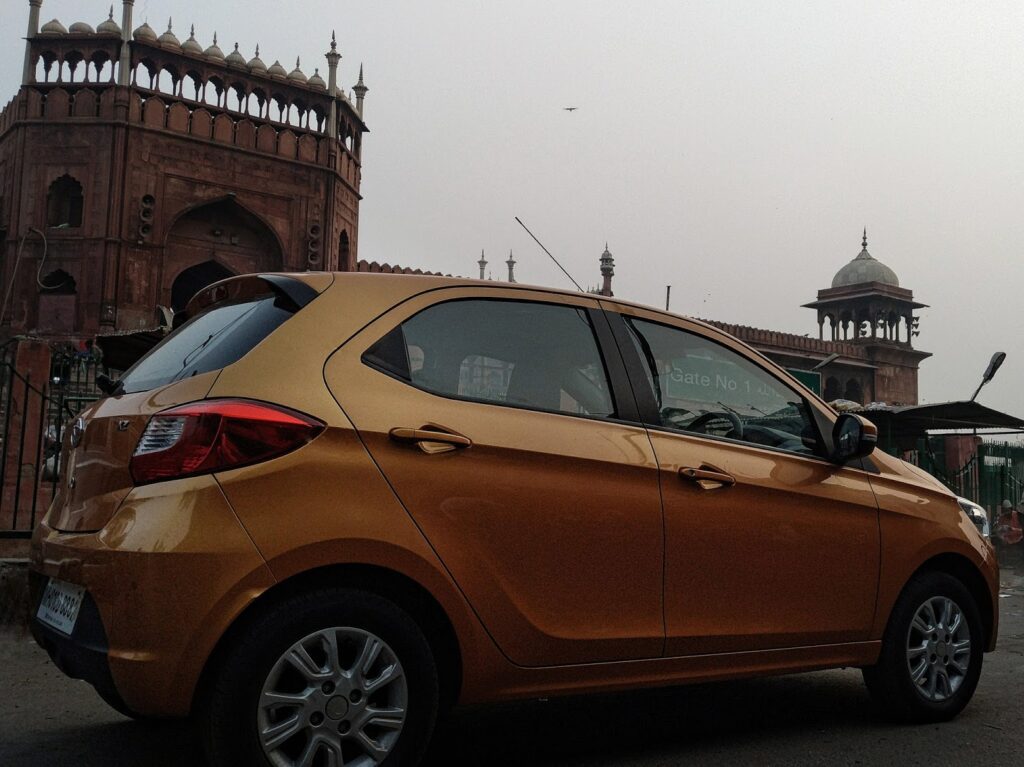 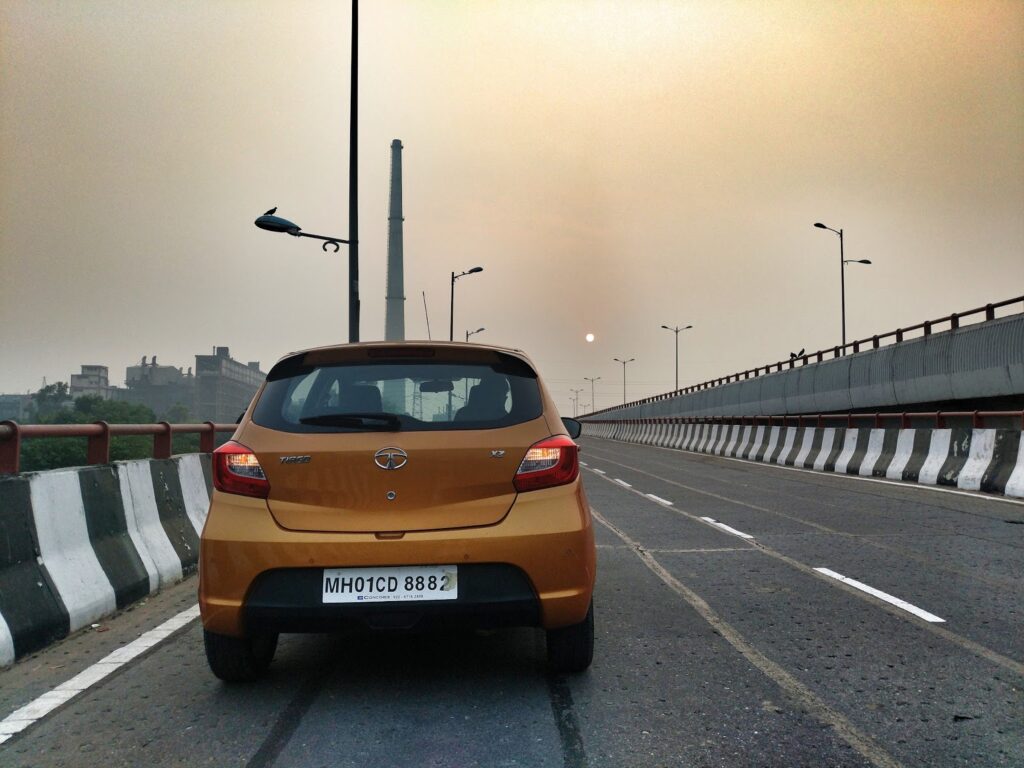 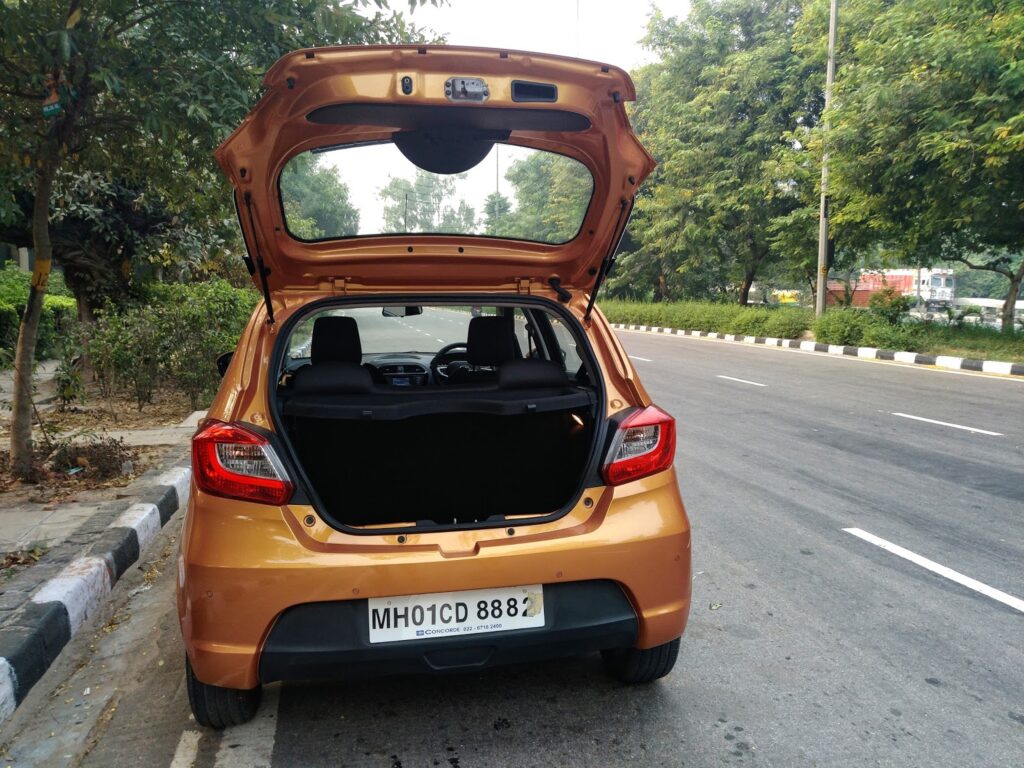 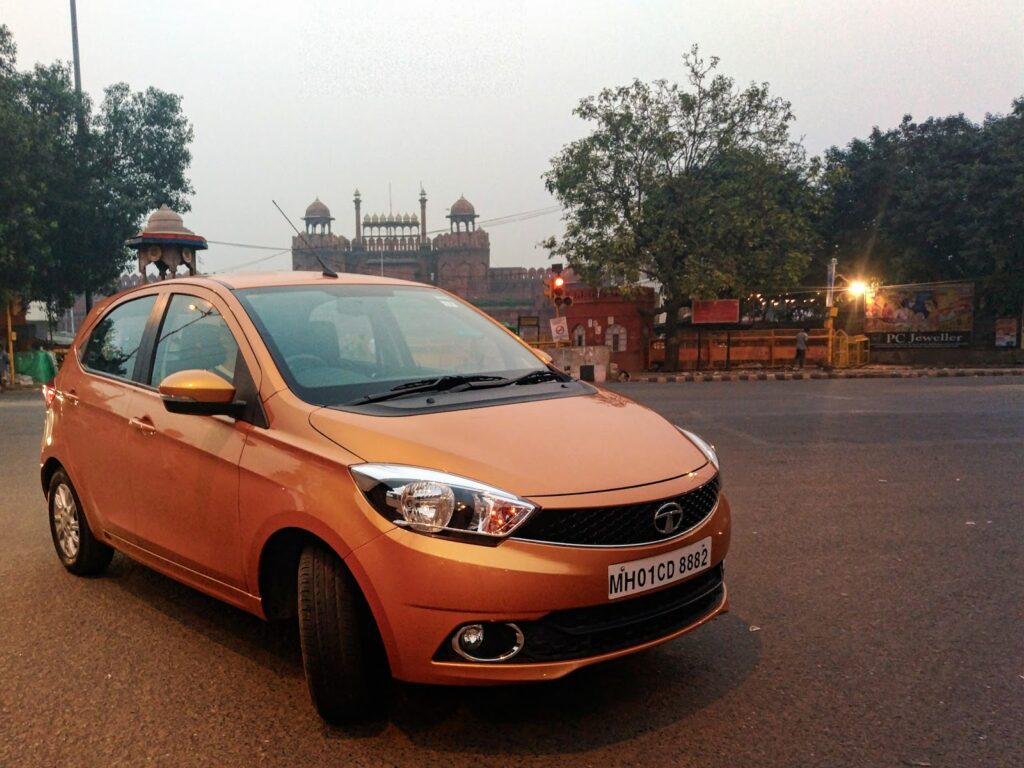 With the Tiago, Tata has come out to play on the front foot. Granted, there are a few niggles that need fixing, but this is still a race horse you could place your bets on. It is tailor made for Generation Z. Having recently turned 18, I can see the appeal the Tiago would have for a first time car buyer. It is youthful, zippy and makes for a perfect city car that strikes a balance between style and comfort, with a bit of responsible performance thrown in. Even as a second family car for the millennial generation, it makes perfect sense.

The Tiago is placed in a crowded segment with some tough competition. But as a complete package, it makes for a compelling and truly #fantastico buy. This is one Tata vehicle that has been universally liked so far, by both critics and customers. If it can manage to sustain the momentum, it may just be the elusive success that the company has been looking for, and bring back the glory days. 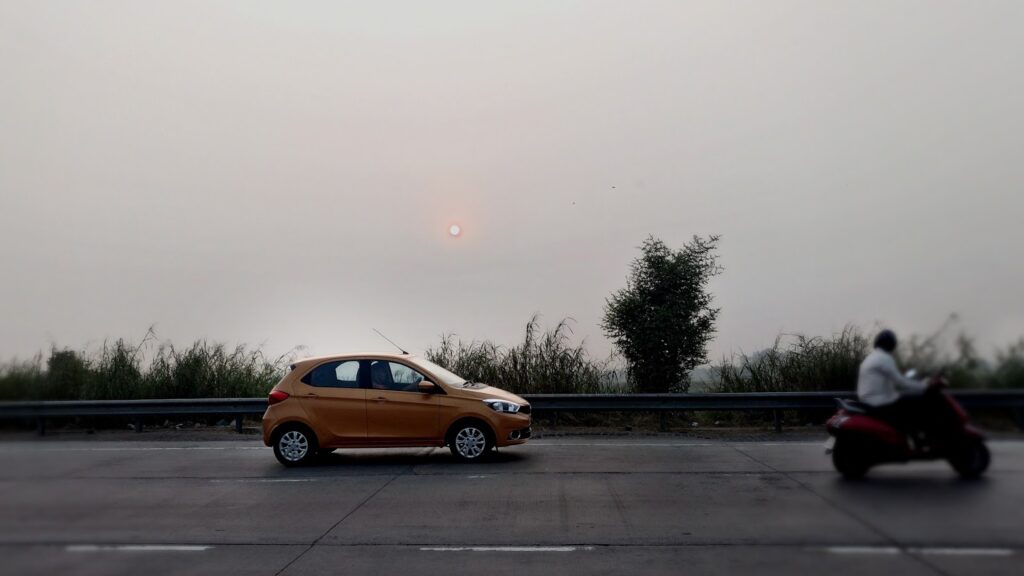 Tata Tiago XZ 1on the highway